The Fund’s investment objective is overall total return consisting of long-term capital appreciation and income. They pursue their objective by investing in equities. The managers start with a tactical asset allocation plan that lets them know what sectors they’d like to have exposure to. They can gain that exposure directly, by purchasing common or preferred shares, but their core strategy is to gain the exposure through owning shares of closed-end funds and ETFs. Their specialty is in trading CEFs when those funds’ are selling at historically unsustainable discounts. The inevitable closure of those discounts provides a market-neutral arbitrage gain on top of any market gains the fund posts.

Not yet determined, but the broader RiverNorth Core Opportunity (RNCOX) fund using the same strategy closed at under $500 million.

Operating expenses are capped at1.60%, on assets of $13 million, as of January 2014. Like RiverNorth Core Opportunity, the fund also incurs additional expenses in the form of the operating costs of the funds it buys for the portfolio. Those expenses vary based on the managers’ ability to find attractively discounted closed-end funds; as the number of CEFs in the portfolio goes up, so does the expense ratio. RiverNorth estimates the all-in expense ratio to be about 2.17%.

Polonius, in his death scene, famously puts it this way:

Neither a borrower nor a lender be;
For loan oft loses both itself and friend,
And borrowing dulls the edge of husbandry.
This above all- to thine own self be true,
And it must follow, as the night the day,
Thou canst not then be false to any man.

Gramma Snowball reduced it to, “stick to your knitting, boy.”

RiverNorth’s distinctive strength is their ability to exploit the pricing dislocations caused by short-term irrationality and panic in the market. Their investment process has two basic elements:

RiverNorth uses a number of quantitative models to determine what asset allocation to pursue. In the case of RNEOX, that comes down to determining things like size and sector.

They implement that allocation by investing either through low cost ETFs or through closed-end funds. Closed-end funds can trade at a discount or premium to the value of their holdings. Most funds trade consistently within a narrow band (Adams Express ADX, for example, pretty consistently trades at a discount of 14 – 15.5% so you pay $86 to buy $100 worth of stock). In times of panic, investors anxious to get out of the market have foolishly sold shares of the CEFs for discounts of greater than 40%. RiverNorth has better data on the trading patterns of CEFs than anyone else so they know that ADX at a 14.5% discount is nothing to write home about but ADX at a 22% discount might be a major opportunity because that discount will revert back to its normal range. So, whether the market goes up or down, the ADX discount will narrow.

If RiverNorth gets it right, investors have two sources of gain: investing in rising sectors because of the asset allocation and in CEFs whose returns are super-charged by the contracting discount. They are, for all practical purposes, the sole experienced player in this game.

In December 2012, RiverNorth launched RiverNorth/Manning & Napier Dividend Income Fund. The fund struck us as a curious hybrid: one half of the portfolio with RiverNorth’s opportunistic, higher-turnover closed-end fund strategy while the other half was Manning & Napier’s low-key, enhanced index strategy which rebalances its holdings just once a year. It was a sort of attempt to marry spumoni and vanilla. While we have great respect for each of the managers, the fund didn’t strike us as offering a compelling option and so we chose not to profile it.

The fund’s performance was not outstanding. The fund posted very respectable absolute returns in 2013 (25.6%) but managed to trail 90% of its peers. Manning and Napier Dividend Focus (MNDFX) whose strategy was replicated here, trailed 90% of its peers in 2013 and in three of the past four years.

Investors were not intrigued. At the end of November, 2013, the fund’s assets stood at $14 million.

RiverNorth noticed. In November, RiverNorth’s Board of Trustees voted not to renew the sub-advisory contract with Manning & Napier.

The reborn fund will stick to RiverNorth’s knitting: a tactical asset allocation plan implemented through CEFs when possible. It’s a strategy that they’ve put to good use in their (closed) RiverNorth Core Opportunity Fund (RNCOX), a stock/bond hybrid fund that uses this same discipline.

Here’s the story of RiverNorth Core in two pictures.

From inception, Core Opportunity turned $10,000 into $17,700. Its average balanced competitor generated $13,500. You might note that Core made two supercharged moves upward in late 2008 and early 2009, which strongly affected the cumulative return. 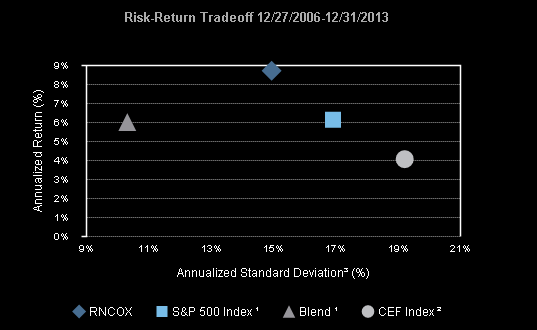 From inception, Core Opportunity has had noticeably greater short-term volatility than has its average competitor, but also noticeably higher returns. And, in comparison to the S&P 500, it has offered both higher returns and lower volatility.

Investors do need to be aware of some of the implications of RiverNorth’s approach.  Three things will happen when market volatility rises sharply:

The opportunities for excess returns rise. When people panic, mispricing becomes abundant and the managers have the opportunity to deploy cash in a rich collection of funds.

The fund’s short-term volatility rises. Moving into a market panic is profitable in the long-term, but can be hair-raising in the short term. 30% discounts can go to 40% before returning to 5%. The managers know that and are accustomed to sharp, short-term moves. The standard deviation, above, both reflects and misrepresents that volatility. It correctly notes the fund’s greater price movement, but fails to note that some of the volatility is to the upside as the discounts contract.

The fund’s expense ratio rises. The managers have the option of using inexpensive ETFs to implement their asset allocation, which they do when they are not compelling opportunities in the CEF arena. CEFs are noticeably costlier than ETFs, so as the move toward the prospect of excess return, they also incur higher expenses.

And, subsequently, portfolio turnover rises. An arbitrage strategy dictates selling the CEF when its discount has closed, which can happen quite suddenly. That may make the fund less tax-efficient than some of its vanilla peers.

RiverNorth has a distinctive strategy that has served its investors well. The rechristened fund deserves serious consideration from investors who understand its unique characteristics and are willing to ride out short-term bumps in pursuit of the funds extra layer of long-term returns.