My name is Valston Yearwood.  Welcome to my portfolio.  This portion of the Observer site provides readers with some information about me and my approach to writing, as well as some of my recent articles.

A Bit about Me

I’d like to introduce myself.  My given name, Valston, is old and honorable.  French originally, though long used by Brits.  The most famous of us was the Australian Air Marshall Valston Hancock.  That said, it has always sounded to me a bit too formal and everyone mispronounced it. I ended up sounding like a small European car (“My Valston puts the fun back in driving.”), and so I go by Junior.  I’m a writer, whose career started in manufacturing. 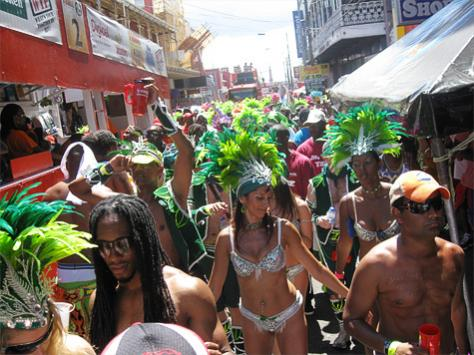 Trinidad: on a good day, it looks like this. Well, okay, that particular day probably qualified as a really good one.

I live in a small town in the southern third of the island of Trinidad. It’s called Petit Café. It’s an apt name, the place has a feeling of closeness and casual interaction and by international standards it is indeed petite.

It’s a place with a French name in a former British colony that was discovered by a Spanish explorer who was actually Portuguese.

But then Trinidad and Tobago is that sort of place, a nation of celebrated diversity. The New York Times caught the flavor of the place in their recent “36 Hours in Trinidad” profile.

Most of my time is occupied with my writing (from poker to smartphone apps). When not working I enjoy competitive American Presidential politics (it’s a great spectator sport), T20 Cricket and spending time with my nephews and nieces.

As a writer for ThinkMatter, a Canadian web-content firm, my specialty is product reviews. I cover recently released hardware, software, websites, games, and consumer electronic and technology devices.  As a Contributing Editor for the Mutual Fund Observer, I’m broadening my portfolio into personal finance, economics and investment strategies.  My special charge is to identify for our readers the web’s best writing and sharpest insights in those fields.  Every month I  survey dozens of candidates and, working with the Observer’s publisher,  profile a few of those sites that prove to be exemplary.

I capture the reader’s initial interest:

What Google wants Google usually gets, and, if past acquisition are any sort of guide to future ones Google might want Duolingo.

I then I try to maintain that interest throughout with solid content:

The new project, which is launching in private beta, seeks to overcome the shortcomings inherent in automated computer translations: computers do not provide accurate translations because of the issue of context. A machine may accurately translate each individual word in a given sentence, but the end result will often make no sense when read aloud.

And I get the facts right:

Duolingo is an online language-learning system created by Luis von Ahn, a native of Guatemala and former recipient of the MacArthur Fellowship (aka the “genius grant”).

Readers, or editors, who are interested in examples of my current work, can find them here.  My monthly column on investment sites is simply labeled “The Best of the Web.”  My editors at ThinkMatter (which provides content for, among others, ziphi.com and notebooksunlimited.net) have been kind enough to allow me to reproduce a variety of my work for them.  Most of it, as is common in the industry, is published without a byline.

Apple takes a bite out of television (2011, December)

Apple hates to lose. The company co-founded by the late visionary Steve Jobs has a single-minded determination to win—and win outright. The one thing though that Mr. Jobs hated even more than losing was being second best.

All Eyes on Google as Duolingo Launches Language Learning (2011, December)

What Google wants, Google usually gets. And if past acquisitions are any sort of guide to future ones, Google might want Duolingo. Duolingo is an online language-learning system created by Luis von Ahn, a native of Guatemala and former recipient of the MacArthur Fellowship (aka the “genius grant”).

Mobile Life Guard, a smartphone app developed by researchers at the University of North Texas, promises to keep an eye on drivers—just in case no one else was watching.

What is Mobile Life Guard?

That was the catchphrase of the PC maker years ago when it was a just a featherweight going up against the heavyweights of the day. With the Dell XPS 13 and their well-publicized intentions to shift their focus away from traditional notebooks and netbook production, they may just be prepping a new line of commercials: “Dude, you’re getting an Ultrabook!”

Occasionally I get lured off in other directions, as when I was commissioned to review a series of online poker sites.

The highly respected Merge Network Proudly presents Carbon Poker to online poker lovers worldwide, including those in the US.  Established in 2007 Carbon Poker has built up a strong reputation for quality security and efficient service. The superior gaming experience is also enhanced with a wide variety of different game types, and an extensive program that rewards player loyalty.

If you’ve got questions, or would like to offer suggestions for websites or topics, feel free to contact me: [email protected]