The fund is pursuing both high current income and capital appreciation. The fund primarily invests in shorter-term high-yield corporate bonds, bank debt, convertibles and U.S. government securities. They have the option of buying a wider array of income-producing securities, including investment-grade debt, dividend-paying common or preferred stock. It shifts between security types based on what the manager’s believe offers the best risk-adjusted prospective returns and is also willing to hold cash. The portfolio is generally very concentrated.

Jason Lazarus, with the help of Ben Franklin, and Mark Travis. Messrs. Franklin and Lazarus joined Intrepid in 2008 after having completed master’s degrees at the University of North Florida and Florida, respectively. Mr. Travis is a founding partner and has been at Intrepid Capital since 1994. Before that, he was Vice President of the Consulting Group of Smith Barney and its predecessor firms for ten years.

The managers estimate they might be able to handle up to $1 billion in this strategy. Currently the strategy manifests itself here, in balanced separate accounts and in the fixed-income portion of Intrepid Capital Fund (ICMBX/ICMVX).  In total, they’re currently managing about $300 million.

You get your pick! The High-Yield Fixed Income strategy, originally open only to private clients, was launched on April 30, 1999.  The fund’s Investor class was launched on July 2, 2007 and the original Institutional class on August 16, 2010.

$2,500.  On January 30, 2014, the Investor and Institutional share classes of the fund were merged. Technically the surviving fund is institutional, but it now carries the low minimum formerly associated with the Investor class.

There are some very honorable ways to end up with a one-star rating from Morningstar.  Being stubbornly out-of-step with the herd is one path, being assigned to an inappropriate peer group is another.

There are a number of very good conservative managers running short-term high yield bond funds who’ve ended up with one star because their risk-return profiles are so dissimilar from their high-yield bond peer group.  Few approach the distinction with as much panache as Intrepid Income:

Why the apparent lack of concern for a stinging and costly badge? Two reasons, really. First, Intrepid was founded on the value of independence from the investment herd. Mr. Lazarus reports that “the firm is set up to avoid career risk which frequently leads to closet-indexing.  Mark and his dad [Forrest] started it, Mark believes in the long-term so managers are evaluated on process rather than on short-term outcomes. If the process is right but the returns don’t match the herd in the short term, he doesn’t care.”  Their goal, and expectation, is to outperform in the long-term. And so, doing the right thing seems to be a more important value than getting recognized.

In support of that observation, we’ll note that Intrepid once employed the famously independent Eric Cinnamond, now of Aston/River Road Independent Value (ARIVX), as a manager – including on this fund.

Second, they recognize that their Morningstar rating does not reflect the success of their strategy. Their intention was to provide reasonable return without taking unnecessary risks. In an environment where investment-grade bonds look to return next-to-nothing (by GMO’s most recent calculations, the aggregate US bond market is priced to provide a real – after inflation – yield of 0.4% annually for the remainder of the decade), generating a positive real return requires looking at non-investment-grade bonds (or, in some instances, dividend-paying equities).

They control risk – which they define as “losing money” or “permanent loss of capital,” as opposed to short-term volatility – in a couple ways.

First, they need to adopt an absolute value discipline – that is, a willingness both to look hard for mispriced securities and to hold cash when there are no compelling options in the securities market – in order to avoid the risk of permanent impairment of capital. That generally leads them to issuers in healthy industries, with predictable free cash flow and tangible assets. It also leads to higher-quality bonds which yield a bit less but are much more reliable.

Second, they tend to invest in shorter-term bonds in order to minimize interest rate risk.

If you put those pieces together well, you end up with a low volatility fund that might earn 3.5 to 4.5% in pricey markets and a multiple of that in attractively valued ones. Because they’ve never had a bond default and they rarely sell their bonds before they’re redeemed (Mr. Lazarus recalls that “I can count on two hands the number of core bond positions we’ve sold in the past five years,” though he also allows that they’ve sold some small “opportunistic” positions in things like convertibles), they can afford to ignore the day-to-day noise in the market.

In short, you end up with Intrepid Income, a fund which might comfortably serve as “a big part of your mother’s retirement account” and which “lots of private clients use as their core fixed-income fund.”

In both the short- and long-term, their record is excellent.  The longest-term picture comes from looking at the nearly 15 year record of the High-Yield Fixed Income strategy which is manifested both in separate accounts and, for the past seven years, in this fund. 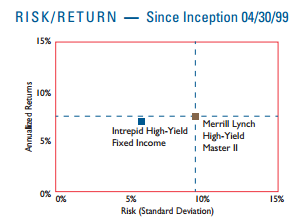 Since inception, the strategy has earned 7.25% annually, trailing the Merrill Lynch high-yield index by just 38 basis points.  That’s about 94% of the index’s total return with about 60% of its volatility.  Over most shorter periods (in the three to ten year range), annual returns have been closer to 5-6%.

In the shorter term, we can look at the risks and returns of the fund itself.  Here’s Intrepid Income charted against its high-yield peer group. 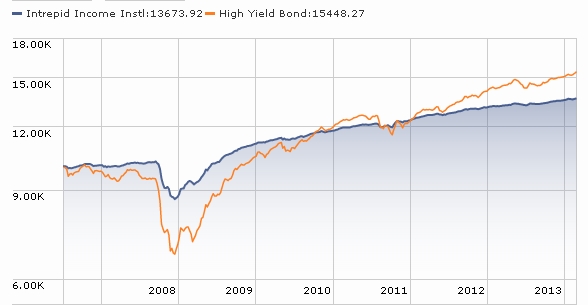 By every measure, that’s a picture of very responsible stewardship of their shareholders’ money.  The fund’s beta is around 0.25, meaning that it is about one-fourth as volatile as its peers. Its standard deviation from inception to January 2014 is just 5.52 while its peers are around nine. Its maximum drawdown – 14.6% – occurred over a period of just three months (September – November 2008) before the fund began rebounding.

The fund’s careful, absolute value focus – shorter term, higher quality high-yield bonds and the willingness to hold cash when no compelling values present themselves – means that it will rarely keep up with its longer-term, lower quality, fully invested peer group.

And that’s good. By the Observer’s calculation, Intrepid Income qualifies as a “Great Owl” fund. That’s determined by looking at the fund’s risk-adjusted returns (measured by the fund’s Martin Ratio) for every period longer than one year and then recognizing only funds which are in the top 20% for every period. Intrepid is one of the few high-yield funds that have earned that distinction. While this is not a cash management account, it seems entirely appropriate for conservative investors who are looking for real absolute returns and have a time horizon of at least three to five years. You owe it to yourself to look beyond the star rating to the considerable virtues the fund holds.

We think it’s entirely worth looking at both the Intrepid Income Fund homepage and the homepage for the underlying High-Yield Fixed Income strategy. Because the strategy has a longer public record and a more sophisticated client base, the information presented there is a nice complement to the fund’s documentation.