To provide shareholders with long-term capital appreciation in a well-diversified portfolio.  They invest primarily in U.S. mid- to large caps, though the portfolio does offer some international exposure (about 10% in mid-2011) and some small company exposure (about 2%).   On average, 80% of the portfolio is in the stock market while the rest is in cash, short term bonds and other cash equivalents.  The manager looks to buy stocks that are “relatively undervalued,” though Morningstar generally describes the portfolio as a blend of styles.  The core of the portfolio is in “sound businesses [with] dedicated, talented leaders” though they “sometimes may invest opportunistically in companies that may lack one of these qualities.”  The portfolio contains about 80 stocks and turnover averages 30% per year.

Marc S. Heilweil.  Mr. Heilweil is President of Spectrum.  He founded the firm in 1991 and has managed Marathon since early 2000.  He received both his B.A. and his J.D. from Yale.

Mr. Heilweil has over $1 million invested, and is the fund’s largest shareholder.

The original fund launched on March 12, 1998 but was reorganized and re-launched under new management in March 2000.

It’s not hard to find funds with great returns.  Morningstar lists them daily, the few surviving financial magazines list them monthly and The Wall Street Journal lists them quarterly.  It’s considerably harder to find funds that will make a lot of money for you. The indisputable reality is that investors get greedy any time that the market hasn’t crashed in 12 months and are delusional about their ability to stick with a high-return investment.   Many funds with spectacular absolute returns have earned very little for their investors because the average investor shows up late (after the splendid three-year returns have been publicized) and leaves early (after the inevitable overshoot on the downside).

The challenge is to figure out what your portfolio needs to look like (that is, your mix of stocks, bonds and cash and how much you need to be adding) in order for you to have a good chance of achieving your goals, and then pick funds that will give you exposure to those assets without also giving you vertigo.

For investors who need core stock exposure, little-known Marathon Value offers a great vehicle to attempt to get there safely and in comfort.  The manager’s discipline is unremarkable.  He establishes a firm’s value by looking at management strength (determined by long-term success and the assessment of industry insiders) and fundamental profitability (based on a firm’s enduring competitive advantages, sometimes called its “economic moat”).  If a firm’s value exceeds, “by a material amount,” its current share price, the manager will look to buy.  He’ll generally buy common stock, but has the option to invest in a firm’s high-yield bonds (up to 10% of the portfolio) or preferred shares if those offer better value.   Occasionally he’ll buy a weaker firm whose share price is utterly irrational.

The fund’s April 2011 semi-annual report gives a sense of how the manager thinks about the stocks in his portfolio:

In addition to Campbell, we added substantially to our holdings of Colgate Palmolive in the period.  Concerns about profit margins drove it to a price where we felt risk was minimal. In the S&P 500, Colgate has the second highest percentage of its revenues overseas.  Colgate also is a highly profitable company with everyday products.  Colgate is insulated from private label competition, which makes up just 1% of the toothpaste market.  Together with Procter & Gamble and Glaxo Smithkline, our fund owns companies which sell over half the world’s toothpaste.  While we expect these consumer staples shares to increase in value, their defensive nature could also help the fund outperform in a down market.

Our holdings in the financial sector consist of what we consider the most careful insurance underwriters, Alleghany Corp., Berkshire Hathaway and White Mountain Insurance Group.  All three manage their investments with a value bias.  While Berkshire was purchased in the fund’s first year, we have not added to the position in the last five years.  One of our financials, U.S. Bancorp (+7%) is considered the most conservatively managed of the nation’s five largest banks.  The rest of our financial holdings are a mix of special situations.

There seems nothing special about the process, but the results place Marathon among the industry’s elite.  Remember: the goal isn’t sheer returns but strong returns with limited risk.  Based on those criteria, Marathon is about as good as a stock fund gets.  For “visual learners,” it’s useful to glance at a risk-return snapshot of domestic equity funds over the past three years. 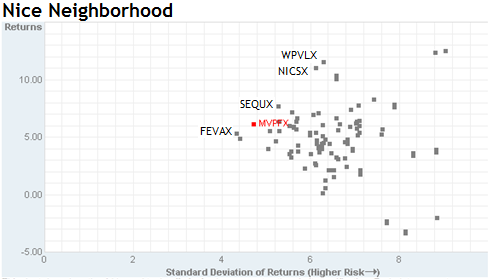 Here’s how to read the chart: you want to be as close as possible to the upper-left corner (infinite returns, zero risk).  The closer you get, the better you’re being served by your manager.  Five funds define a line of ideal risk/return balance; those are the five dots in a row near the upper-left.  Who are they?  From lower return/lower risk, they are:

Marathon Value (MVPFX): five stars for the past three-, five- and ten-year periods, as well as since inception, but with exceedingly modest assets.

Sequoia (SEQUX): five stars, $4.4 billion in assets, made famous by Bill Ruane and Bob Goldfarb, closed to new investors for a quarter century.

Weitz Partners Value (WPVLX): five stars over the past three years, $710 million in assets, run by Wally Weitz for 28 years.

That’s a nice neighborhood, and the funds have striking similarities: a commitment to high quality investments, long-tenured managers, low turnover, and a willingness to hold cash when circumstances dictate.  Except for Marathon, they average $2 billion in assets.

Fans of data could search Morningstar’s database for domestic large cap stock funds that, like Marathon, have “low risk” but consistently better long-term returns than Marathon.  There are exactly three funds (of about 1300 possibles) that meet those criteria: the legendary Sequoia, Amana Income (AMANX) and Auxier Focus (AUXFX), both of which are also profiled as “stars in the shadows.”

Regardless of how you ask the question, you seem to get the same answer: over Mr. Heilweil’s decade with the fund, it has consistently taken on a fraction of the market’s volatility (its beta value is between 74 and 76 over the past 3 – 10 years and Morningstar calculates its “downside capture ratio” as 68%). Alan Conner from Spectrum reports that Marathon is the 11th least volatile large core fund of near 1800 that Morningstar tracks. At the same time, it produces decent if not spectacular returns in rising markets (it captures about 82% of the gains in a rising market).  That combination lets it post returns in the top 10% of its peer group over the past 3 – 10 years.

Because Mr. Heilweil is in his mid 60s and the fund depends on his skills, potential investors might reasonably ask about his future.  Mr. Conner says that Heilweil intends to be managing the fund a decade from now.  The fund represents a limited piece of Heilweil’s workload, which decreases the risk that he’ll become bored or discouraged with it.

If you accept the arguments that (a) market volatility will remain a serious concern and (b) high-quality firms remain the one undervalued corner of the market, then a fund with a long record of managing risk and investing in high-quality firms makes great sense.  Among funds that fit that description, few have compiled a stronger record than Marathon Value.