From the Mutual Fund Observer discussion board, December 2012

Current trend on MFO is discussion of negative impact to bond-heavy income and retirement portfolios, if and when rates rise.

In David’s inaugural column on Amazon money and markets “Trees Do Not Grow To The Sky”, he calls attention to: “If interest rates and inflation move quickly up, the market value of the bonds that you (or your bond fund manager) hold can drop like a rock.” And there have been several recent related posts about an impending “Bond Bubble.”

Here’s look back at average intermediate term bond fund performance during the past 50 years: 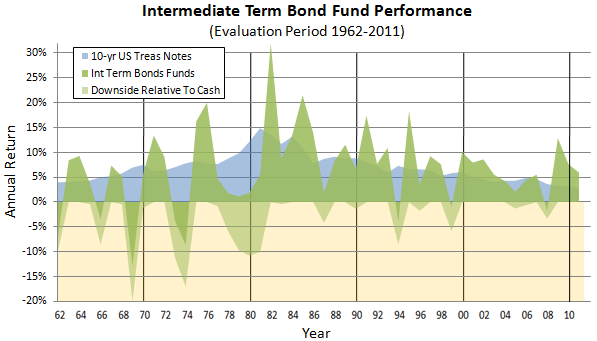 Background uses same 10-year Treasury yield data that David highlights in his guest column. Also plotted is the downside return relative to cash or money-market, since while these funds have held up fairly well on absolute terms, on relative terms the potential for under-performance is quite clear.

More dramatic downside performance can be seen the higher yield (generally quality less than BB) bond funds, where relative and even absolute losses can be 25%: 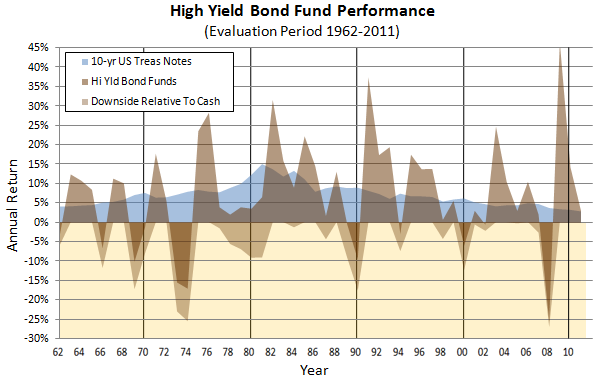 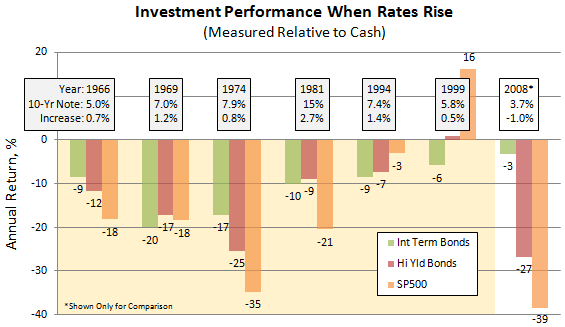 I included for comparison 2008 performance. Here declines were not driven by increasing rates, but by the financial crisis, of course. Presumably, such strong relative performance for intermediate bonds in 2008 is what has driven the recent flight to bonds. That said, several previous periods of increasing rates happened during bear markets, like 1974, making alternatives to bonds tough to find.

Over the (very) long run, equities out-perform bonds and cash, as is evident below, but may not be practical alternative to bonds for many investors, because of investment horizon, risk-tolerance, dependence on yield, or all the above. 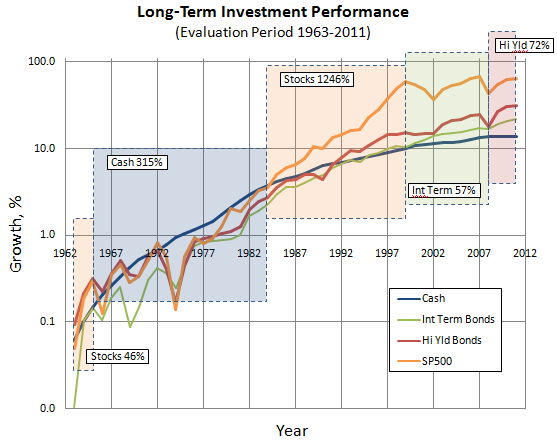 What’s so interesting about this look-back are the distinct periods of “ideal” investments, by which I mean an investment vehicle that both outperformed alternatives and did not incur a sharp decline, as summarized in table below: 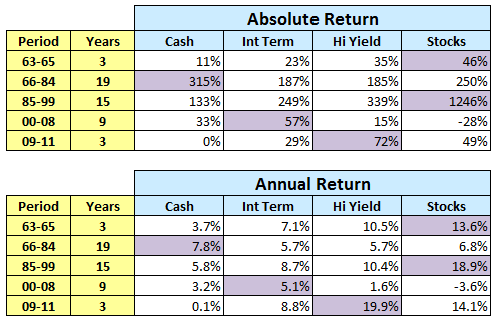 In the three years from 1963-65, stocks were the choice. But in the 19 years from 1966-84, cash was king. Followed by the extraordinary 15-year bull run for stocks. Ending with the current period, if you will, where bonds have been king: first, intermediate term bonds from 2000-08, but most recently, alluring high yield bonds since 2009.

Despite its flat-line performance since 2009, cash is often mentioned as a viable alternative (eg, Scout Unconstrained Bond Fund SUBFX and Crescent Fund FPACX are now cash heavy). But until I saw its strong and long-lived performance from 1966-84, I had not seriously considered. Certainly, it has offered healthy growth, if not yield, during periods of rising interest rates.