Unlike industry heavyweights such as Morningstar and Lipper, LB Ratings focuses on a relatively small number of bond funds in a limited number of categories. They divide funds into categories based on purpose. The categories currently listed are core bond funds, municipal bond funds, short term/low-duration bond funds, high credit risk bond funds and long duration funds. Their belief is that no individual or family should have more than 5 purpose driven funds in their portfolio. This is how David Waring describes their approach:

We have tremendous respect for Morningstar and Lipper’s mutual fund and ETF ratings. LB Ratings will not replace these great tools. However, we recognize many investors find these tools overwhelming and complicated to apply to making investment choices. We are addressing the need for a simplified product which expresses strong views as to which funds an investor should own.

LB Ratings does not use a mathematical formula to identify or rate individual funds. Every fund listed on LB ratings was personally chosen and rated by the co-founders.  Instead of mechanical, number-based, quantitative analysis, they use a specific set of criteria to personally select and rate individual funds. Factors include fund performance both long and short term, risk levels, associated fees and quality and tenure of management. Funds are given a rating level between 1 and 5 stars, 1 being the lowest and 5 the highest. The website describes this method as “opinionated ratings.”  They are clear and upfront about their methods and their belief that all fund rating agencies and websites are inherently subjective.   This makes LB’s ratings akin to Morningstar’s Analyst Ratings (the Gold, Silver … designations). 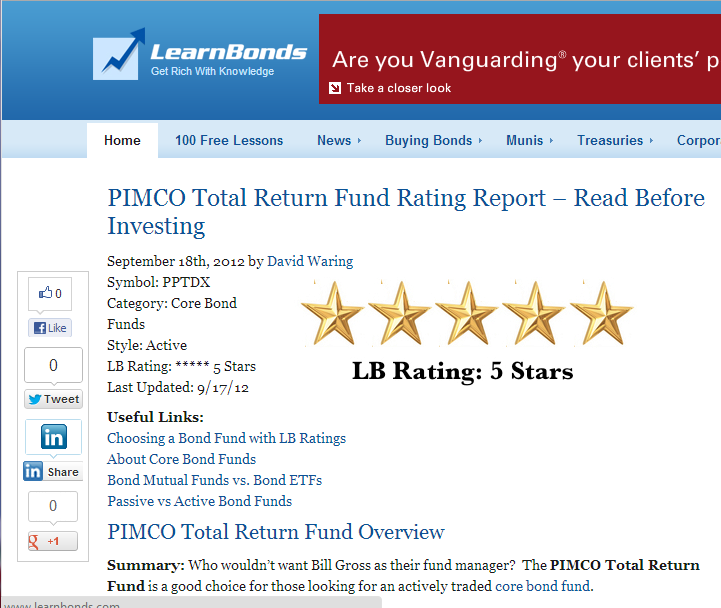 Every fund listed is accompanied by a compact but comprehensive report that outlines its strengths and weaknesses, as well as the rationale behind its rating. In addition to their bond fund and ETF lists, LB Ratings also offers links to bond and fund related articles. Additionally, website visitors can sign up for a daily newsletter, or download the free e-book “How to Invest in Bonds.”

The website is simple and straightforward, providing shortlists of funds that were hand chosen by experts in the field.  The rating report that accompanies each fund is clear and concise, giving readers information that can be useful to them independent of the rating. Fewer categories and shorter lists may be less stressful to some investors and help to reduce confusion.

The limited number of categories and funds means that inevitably many strong candidates will be missing. The subjective nature of the ratings will be too abstract for many. The lack of comparative tools – and tools in general – will limit the site’s appeal to investors who need more in-depth coverage. One practical concern we have is that there’s no evidence of predictive validity for the LB ratings; that is, they don’t have proof that their five star funds will perform better in the future than their three star ones.  Here’s Mr. Prosser’s response:

As far as predictive analysis , I would make the argument that at least for actively traded bonds funds we are in a period of time where quantitative analysis is difficult to employ:

Funds have radically changed the profile of the assets they hold and significantly drifted away from their benchmarks. Here are two easy examples; the Templeton World Bond Fund is now a short-duration fund, with a duration two years shorter than its peers. The PIMCO Total Return Fund now is a large holder of munis. which are neither included in its benchmark nor have they ever been a major part of its holdings.  In both cases, these are radical departures from the past . . . and at the same time [might be] temporary positions . . .  As a result, more than ever you’re “betting” on the skill of the fund’s manager.  Or put another way, historically the best performing bond mutual funds had most their returns generated from beta and now they are generating it from alpha. In short, I don’t think the quant models being employed really capture this shift.  [Assessing these funds] requires more qualitative analysis.

Although the website’s offerings are limited, many investors may prefer a human chosen shortlist of choices over one generated by a computer.  For those who don’t need or likely will not use tools such as screeners and comparative charts, the simple straightforward nature of LB Ratings will be welcome. As the website itself acknowledges though, a fund rating website is built on trust.  Trust is earned over time, and ultimately only time will tell how the “opinionated ratings” approach fares against the tried and tested methods of the industry’s heavyweights in terms of performance.  For now, we conclude that LB has a sensible niche, that it’s interesting, worth watching and potentially useful, so long as you use their ratings as a starting point rather than a final word.