From the Mutual Fund Observer discussion board, January 2013

A recent thread by hank, catch22, bee, MikeM, and Investor got me thinking about risk adjusted returns. Here is a link to their discussion: How To Calculate Risk-Adjusted Rate of Return.

With same database of oldest share class fund performance from Funds That Beat The Market, I ranked funds by Sharpe, Sortino, and Martin (or so-called Ulcer Performance) indices then compared against relative APR rankings.

For this comparison, Sharpe is defined as fund annualized percentage return (APR) minus 90-day TBill APR divided by fund annualized standard deviation STDEV, all over the same period, which is lifetime of fund (or back to January 1962). Here is the formula used: 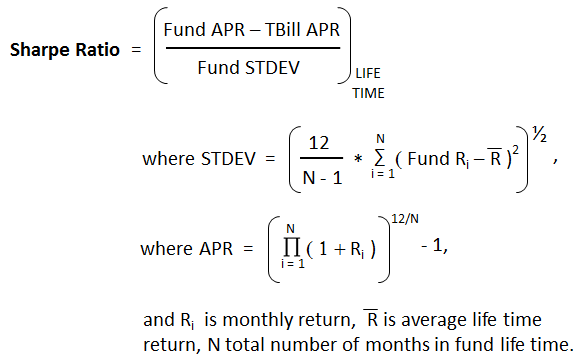 Sortino is same as Sharpe except its denominator is the annualized downside deviation, which only uses monthly returns falling below TBill average, as shown here:

Finally, Martin, which uses same numerator as Sharpe and Sortino, excess return relative to TBill, but it uses the Ulcer Index (UI) for the denominator, which is the square root of the mean of the squared percentage draw downs in value. Here is link to good article: Ulcer Index – An Alternative Approach to the Measurement of Investment Risk & Risk-Adjusted Performance. Here is how I applied its formula:

OK, a few comparisons that I found insightful:

Mutual Shares Z MUTHX is the top performer in APR relative to SP500 and tops all risk adjusted return (RAR) indices in the 50 year equity category. Still, in 2008, it drew down 38%, just like the SP500. American Funds American A AMRMX, on the other hand, one of top three funds picked up by Martin Ratio had a more tempered loss. All top RAP funds in this category in fact had hefty losses in 2008, except AMRMX.

Here’s an example where I think RAR indices really tell the story. Fidelity Magellan FMAGX has best life time APR, but it loses to Sequoia SEQUX in every RAR category. SEQUX produced only a moderate draw down in 2008. Of course, SEQUX may be the best mutual fund of all time…and it shows in the RAR indices.

The stark comparison between First Eagle Global A SGENX and Vanguard Wellesley Income Inv VWINX is another good example of the power of RAR indices. In fact, every top performer in this modest asset allocation class suffered losses of more than 20% in 2008, except VWINX, which has highest Sharpe, Sortino, and Martin ratios, as well as lowest downside deviation and Ulcer Index.

Ditto here for the 30 year equity category. While Fidelity Select Health Care FSPHX produced the highest returns relative to SP500, Mutual Quest Z MQIFX would be my fund of choice, topping all RAR indices. It is the only top fund that lost less than 30% in 2008 – notice its DSDEV and UI values are also lowest.

Finally, here is an example that shows how RARs can be too protective. Gabelli ABC AAA GABCX certainly takes top honors for risk adjusted returns in the 15 year equity category, but it also produced low absolute returns.