Originally published in May 1, 2013 Commentary

Robert D. Arnott manages PIMCO’s All Asset (PAAIX) and leveraged All Asset All Authority (PAUIX) funds. Morningstar gives each fund five stars for performance relative to moderate and world allocation peers, in addition to gold and silver analyst ratings, respectively, for process, performance, people, parent and price. On PAAIX’s performance during the 2008 financial crises, Mr. Arnott explains: “I was horrified when we ended the year down 15%.” Then, he learned his funds were among the very top performers for the calendar year, where average allocation funds lost nearly twice that amount. PAUIX, which uses modest leverage and short strategies making it a bit more market neutral, lost only 6%.

Of 30 or so lead portfolio managers responsible for 110 open-end funds and ETFs at PIMCO, only William H. Gross has a longer current tenure than Mr. Arnott. The All Asset Fund was launched in 2002, the same year Mr. Arnott founded Research Affiliates, LLC (RA), a firm that specializes in innovative indexing and asset allocation strategies. Today, RA estimates $142B is managed worldwide using its strategies, and RA is the only sub-advisor that PIMCO, which manages over $2T, credits on its website.

On April 15th, CFA Society of Los Angeles hosted Mr. Arnott at the Montecito Country Club for a lunch-time talk, entitled “Real Return Investing.” About 40 people attended comprising advisors, academics, and PIMCO staff. The setting was elegant but casual, inside a California mission-style building with dark wooden floors, white stucco walls, and panoramic views of Santa Barbara’s coast. The speaker wore one of his signature purple-print ties. After his very frank and open talk, which he prefaced by stating that the research he would be presenting is “just facts…so don’t shoot the messenger,” he graciously answered every question asked.

Three takeaways: 1) fundamental indexing beats cap-weighed indexing, 2) investors should include vehicles other than core equities and bonds to help achieve attractive returns, and 3) US economy is headed for a 3-D hurricane of deficit, debt, and demographics. Here’s a closer look at each message:

Fundamental Indexation is the title of Mr. Arnott’s 2005 paper with Jason Hsu and Philip Moore. It argues that capital allocated to stocks based on weights of price-insensitive fundamentals, such as book value, dividends, cash flow, and sales, outperforms cap-weighted SP500 by an average of 2% a year with similar volatilities. The following chart compares Power Shares FTSE RAFI US 1000 ETF (symbol: PRF), which is based on RA Fundamental Index (RAFI) of the Russell 1000 companies, with ETFs IWB and IVE:

And here are the attendant risk-adjusted numbers, all over same time period:

RAFI wins, delivering higher absolute and risk-adjusted returns. Are the higher returns a consequence of holding higher risk? That debate continues. “We remain agnostic as to the true driver of the Fundamental indexes’ excess return over the cap-weighted indexes; we simply recognize that they outperformed significantly and with some consistency across diverse market and economic environments.” A series of RAFIs exist today for many markets and they consistently beat their cap-weighed analogs.

All Assets include commodity futures, emerging market local currency bonds, bank loans, TIPS, high yield bonds, and REITs, which typically enjoy minimal representation in conventional portfolios. “A cult of equities,” Mr. Arnott challenges, “no matter what the price?” He then presents research showing that while the last decade may have been lost on core equities and bonds, an equally weighted, more broadly diversified, 16-asset class portfolio yielded 7.3% annualized for the 12 years ending December 2012 versus 3.8% per year for the traditional 60/40 strategy. The non-traditional classes, which RA coins “the third pillar,” help investors “diversify away some of the mainstream stock and bond concentration risk, introduce a source of real returns in event of prospective inflation from monetizing debt, and seek higher yields and/or rates of growth in other markets.”

Mr. Arnott believes that “chasing past returns is likely the biggest mistake investors make.” He illustrates with periodic returns such as those depicted below, where best performing asset classes (blue) often flip in the next period, becoming worst performers (red)…and rarely if ever repeat.

Better instead to be allocated across all assets, but tactically adjust weightings based on a contrarian value-oriented process, assessing current valuation against opportunity for future growth…seeking assets out of favor, priced for better returns. PAAIX and PAUIX (each a fund of funds utilizing the PIMCO family) employ this approach. Here are their performance numbers, along with comparison against some competitors, all over same period: 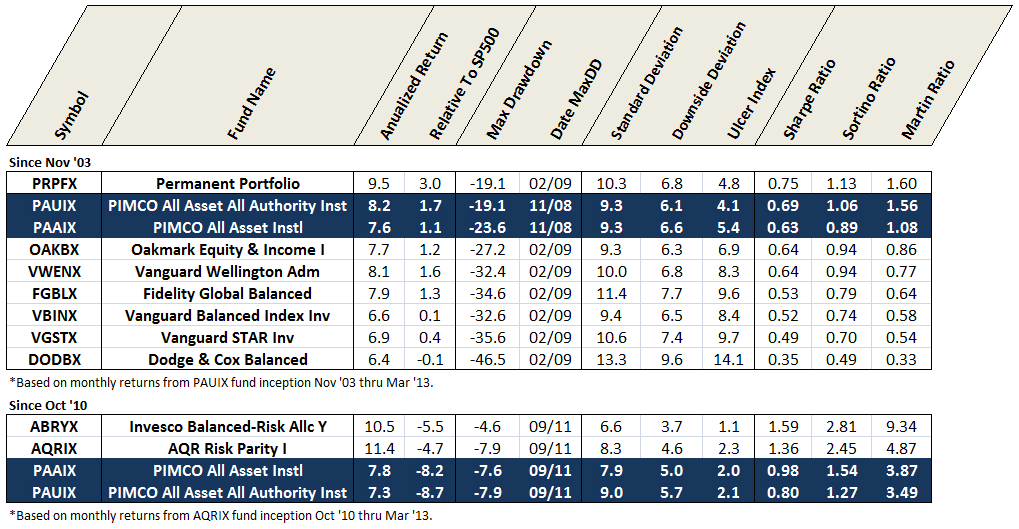 The All Asset funds have performed very well against many notable allocation funds, like OAKBX and VWENX, protecting against drawdowns while delivering healthy returns, as evidenced by high Martin ratios. But static asset allocator PRPFX has actually delivered higher absolute and risk-adjusted returns. This outperformance is likely attributed its gold holding, which has detracted very recently. On gold, Mr. Arnott states: “When you need gold, you need gold…not GLD.” Newer competitors also employing all-asset strategies are ABRYX and AQRIX. Both have returned handsomely, but neither has yet weathered a 2008-like drawdown environment.

The 3-D Hurricane Force Headwind is caused by waves of deficit spending, which artificially props-up GDP, higher than published debt, and aging demographics. RA has published data showing debt-to-GDP is closer to 500% or even higher rather than 100% value oft-cited, after including state and local debt, Government Sponsored Enterprises (e.g., Fannie Mae, Freddie Mac), and unfunded entitlements. It warns that deficit spending may feel good now, but payback time will be difficult.

“Last year, the retired population grew faster than the population of working age adults, yet there was no mention in the press.” Mr. Arnott predicts this transition will manifest in a smaller labor force and lower productivity. It’s inevitable that Americans will need to “save more, spend less, and retire later.” By 2020, the baby boomers will be outnumbered 2:1 by votes, implying any “solemn vows” regarding future entitlements will be at risk. Many developed countries have similar challenges.

Expectations going forward? Instead of 7.6% return for the 60/40 portfolio, expect 4.5%, as evidenced by low bond and dividend yields. To do better, Mr. Arnott advises investing away from the 3-D hurricane toward emerging economies that have stable political systems, younger populations, and lower debt…where fastest GDP growth occurs. Plus, add in RAFI and all asset exposure.