From the Mutual Fund Observer discussion board, July 2013

FAIRX by the numbers…

What strikes me most is the difference in volatility. Superior excess returns with lack of downside volatility is what I suspect really drove Fairholme’s early attention and attendant AUM, once nearly $20B.

Here are the numbers from its inception through 1Q2007, just before financials popped (a kind of preview to my assignment for Mr. Moran):

Even through the great recession, FAIRX weathered the storm…fortunately, for many of us readers here on MFO. Here are the decade’s numbers that helped earn Mr. Berkowitz Morningstar’s top honor: 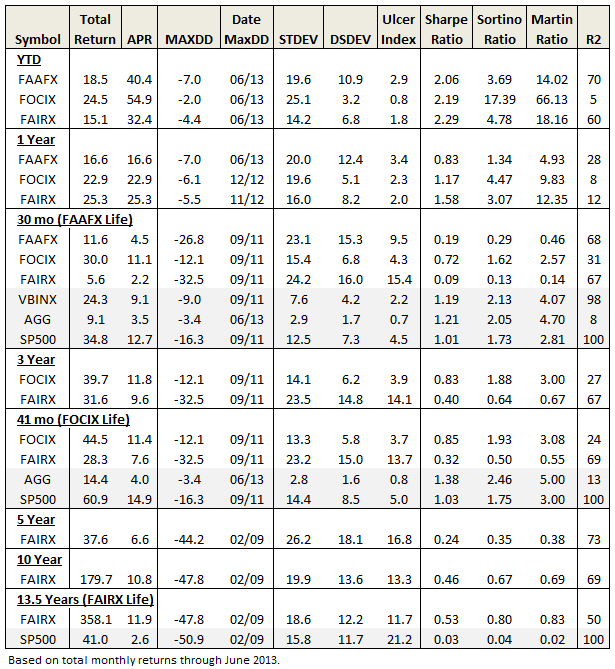 Long term, FAIRX remains a clear winner. But investors have had to endure substantial volatility and drawdown this decade – something they did not experience last decade. It’s resulted in extraordinary redemptions, despite a strong 2012. AUM is now $8B.

The much younger FOCIX tops fixed income ranks in absolute returns, but not risk adjusted returns, again due to high volatility (granted, much of it upward..but not all). The fund bet heavy with MBIA and won big. Here’s current Morningstar performance plot: 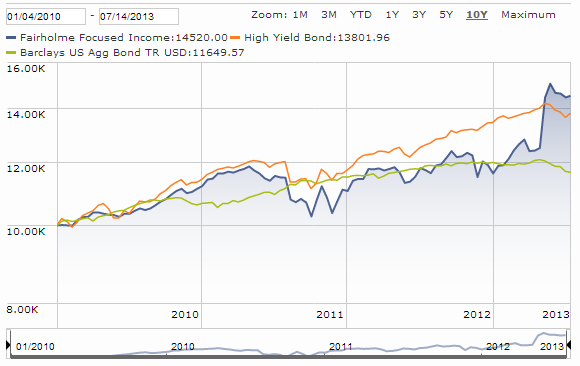 And FAAFX? About all we shareholders can say is that it’s beaten its older brother since inception, which is not saying much. Below market returns at above market volatility. (I still believe it misplayed its once-heavy and long-term holding in MBIA.)

Here are latest MFO ratings for all three Fairholme funds:

None are Great Owls. Yet, if I had to bet on one fund manager to deliver superior absolute returns over the long run, it would be Bruce Berkowitz. But many of us have come to learn, it’s gonna be a bumpy ride. Like some other deep value money managers, he may simply look beyond risk definitions as defined by modern portfolio theory…something fans of Fairholme may need to do also.