Emerging Opportunities pursues long-term capital growth primarily by investing in a small and micro-cap portfolio of emerging and, to a lesser extent, frontier market stocks. Up to 90% of the fund might normally be invested in microcaps (stocks with market cap under $1 billion at the time of purchase), but they’re also allowed to invest up to 35% in stocks over $5 billion. The managers seek high quality companies that they place in one of three classifications:

Best-In-Class Growth Companies: fast earnings growth, good management, strong financials. The strategy is to “find them small and undiscovered; buy and hold” until the market catches on. In the interim, capture the compounded earnings growth.

Fallen Angels: good growth companies that hit “a bump in the road” and are priced as value stocks. The strategy is to buy them low and hold through the recovery.

Stalwarts: basically, blue chip mid-cap stocks. Decent but not great growth, great financials, and the prospect of dividends or stock buy-backs. The strategy is to buy them at a fair price, but be careful of overpaying since their growth may be decelerating.

The stocks in GPEOX represent the emerging and frontier stocks in the flagship Grandeur Peak Global Reach (GPROX) portfolio.

Grandeur Peak Global Advisors is a small- and micro-cap focused global equities investment firm, founded in mid-2011, and comprised of a very experienced and collaborative investment team that worked together for years managing some of the Wasatch funds. They advise four Grandeur Peak funds and one “pooled investment vehicle.” The adviser passed $1 billion in assets under management in July, 2013.

Blake Walker and Spencer Stewart, benignly overseen by Robert Gardiner. Blake Walker is co-founder of and Chief Investment Officer for Grandeur Peak. Mr. Walker was a portfolio manager for two funds at Wasatch Advisors. Mr. Walker joined the research team at Wasatch Advisors in 2001 and launched his first fund, the Wasatch International Opportunities Fund (WAIOX) in 2005. He teamed up with Mr. Gardiner in 2008 to launch the Wasatch Global Opportunities (WAGOX). Mr. Stewart has been a senior research analyst at Grandeur Peak Global Advisors since 2011. He joined Grandeur Peak from Sidoti & Company, a small-cap boutique in New York and had previously worked at Wasatch, which his father founded. Mr. Gardiner is designated as an “Advising Manager,” which positions him to offer oversight and strategy without being the day-to-day guy. Prior to founding Grandeur Peak, he managed or co-managed Wasatch Microcap (WMICX), Small Cap Value (WMCVX) and Microcap Value (WAMVX, in which I own shares). They’re supported by four Senior Research Associates.

$200 million. Grandeur Peak specializes in global small and micro-cap investing. Their estimate, given current conditions, is that they could effectively manage about $3 billion in assets. They could imagine running seven distinct small- to micro-cap funds and close all of them (likely a soft close) when the firm’s assets under management reach about $2 billion. The adviser has target closure levels for each current and planned fund.

None yet disclosed, but the Grandeur Peak folks tend to invest heavily in their funds.

$2,000, reduced to $1,000 for an account established with an automatic investment plan.

There’s little to be said about Emerging Opportunities but much to be said for it.

Grandeur Peak operates a single master profile, which is offered to the public through their Global Reach fund. The other current and pending Grandeur Peak funds are essentially just subsets of that portfolio. Emerging Opportunities are the EM and frontier stocks from that portfolio. While there are 178 diversified emerging markets funds, only 18 invest primarily in small- and mid-cap stocks. Of the 18 smid-cap funds, only two end up in Morningstar’s “small cap” style box (Templeton Emerging Markets Small Cap TEMMX is the other). Of the two true EM small caps, only one will give you significant exposure to both small and micro-cap stocks (TEMMX, still open with a half billion in assets, higher expenses and a front-load, is 14% microcap while GPEOX is 44% microcap).

That’s what we can say about GPEOX. What we can say for it is this: the fund is managed by one of the most experienced, distinguished and consistently successful small cap teams around. The general picture of investing with Grandeur Peak looks rather like this: 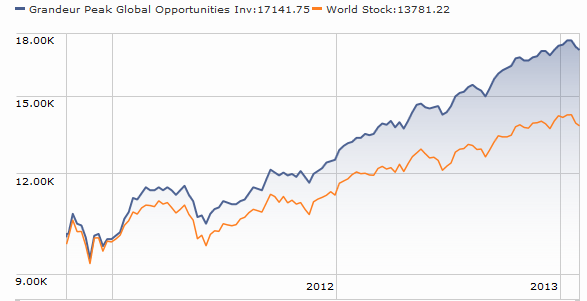 In general, past performance is a rotten way of selecting an investment. When that performance is generated consistently, across decades, categories and funds, by the same team, it strikes me as rather more important.

Their investable universe is about 30,000 publicly-traded stocks, most particularly small and microcap, from around the globe, many with little external analyst coverage. The plan is for Global Reach to function as a sort of master portfolio, holding all of the stocks that the firm finds, at any given point, to be compelling. They estimate that that will be somewhere between 300 and 500 names. Those stocks will be selected based on the same criteria that drove portfolio construction at Global Opportunities and International Opportunities and at the Wasatch funds before them. Those selection criteria drive Grandeur Peak to seek out high quality small companies with a strong bias toward microcap stocks. This has traditionally been a distinctive niche and a highly rewarding one. Each of their three earlier funds boasts their categories’ the smallest market caps by far and, in first 30 months of existence, some of their category’s strongest returns. The pattern seems likely to repeat.

Are there reasons for concern? Three come to mind.

The characteristics of the market are largely unknown. In general, EM small caps offer greater growth prospects, less efficient pricing and greater diversification benefits than do other EM stocks. The companies’ prospects are often more tied to local economies and less dependent on commodity exports to the developed world. The three ETFs investing in such stocks have had solid to spectacular relative performance. That said, there’s a very limited public track record for portfolios of such stocks, with the oldest ETF being just five years old and the only active fund being seven years old. Investing here represents an act of faith as much as a rational calculation.

Managing seven funds could, eventually, stretch the managers’ resources. Cutting against this is the unique relationship of Global Reach to its sister portfolios. The great bulk of the research effort will manifest itself in the Global Reach portfolio; the remaining funds will remain subsidiary to it. That is, they will represent slices of the larger portfolio, not distinct burdens in addition to it.

The fund’s expense ratios are structurally, persistently high. The fund will charge 1.95%, below the fees for many EM smid caps, but substantially above the 1.60% charged by the average no-load EM fund. The management fee alone is 1.35%. Cutting against that, of course, is the fact that Mr. Gardiner has for nearly three decades now, more than earned the fees assessed to his investors. It appears that you’re getting more than what you are paying for; while the fee is substantial, it seems to be well-earned.

This is a very young, but very promising fund. It is also tightly capacity constrained, so that it is likely to close early in 2014 despite Grandeur Peak’s decision not to publicize the fund at launch. For investors interested in a portfolio of high-quality, growth-oriented stocks from the fastest growing markets, there are few more-attractive opportunities available.

By way of disclosure, while the Observer has no financial relationship with or interest in Grandeur Peak, I do own shares of GPEOX in my Roth IRA, along with shares of Wasatch Microcap Value (WAMVX) which Mr. Gardiner once managed.