Originally published in May 1, 2014 Commentary

Mebane Faber is a quant. 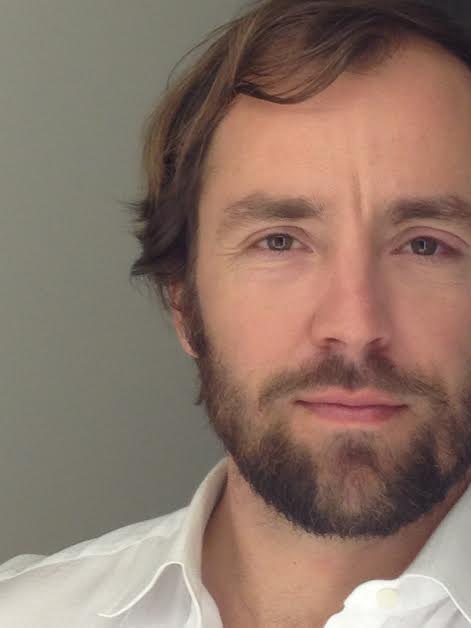 He is a student of financial markets, investor behavior, trend-following, and market bubbles. He pursues absolute return, value, and momentum strategies. And, he likes companies that deliver cash to shareholders.

He recognizes alpha is elusive, so instead focuses on engineering beta, which promises a more pragmatic and enduring reward.

In a field full of business majors and MBAs, he holds degrees in engineering and biology.

He distills a wealth of financial literature, research, and conditions into concise and actionable investing advice, shared through books, his blog, and lectures.

Given low-cost ETFs and mutual funds available today, he thinks people generally should no longer need to hire advisors, or “brokers back in the day,” at 1-2% fees to tell them how to allocate buy-and-hold portfolios. “It kind of borderlines on criminal,” he tells Michael Covel in a recent interview, since such advisors “do not do enough to justify their fees.”

He is a portfolio manager and CIO of Cambria Investment Management, L.P., which he co-founded along with Eric Richardson in 2006. It is located in El Segundo, CA.

His down-to-earth demeanor is at once confident and refreshingly approachable. He cites philosopher Henry David Thoreau: “There is no more fatal blunderer than he who consumes the greater part of his life getting his living.”

The Paper. Mebane (pronounced “meb-inn”) started his career as biotech equity analyst during the genome revolution and internet bubble. While at University of Virginia, he attended an advanced seminar in security analysis taught by the renowned hedge fund manager John Griffin of Blue Ridge Capital. In fulfillment of the Chartered Market Technician program, Mebane drafted a paper that became the basis for “A Quantitative Approach To Tactical Asset Allocation,” published in the Journal of Wealth Management in 2007.

The paper originally included the words “market timing,” but he soon discovered that to a lot of people, the phrase comes with “enormous emotional baggage” and “can immediately shut-down all synapses in their brains.” Similar to Ed Thorp’s experience with his first academic paper on winning at blackjack, Mebane had to change the title to get it published. (It continues to stimulate synapses, as discussed in David’s July 2013 commentary, “Timing Method Performance Over Ten Decades” and periodically on the MFO discussion board.)

He attributes the paper’s ultimate popularity to 1) its simple presentation and explanation of the compelling results, and 2) the fortuitous timing of the publication itself – just before the financial meltdown of 2008/9. Practitioners of the method during that period were rewarded with a maximum drawdown of only -2% through versus -51% for the S&P 500.

The Books. There are three. All insightful, concise, and well-received: 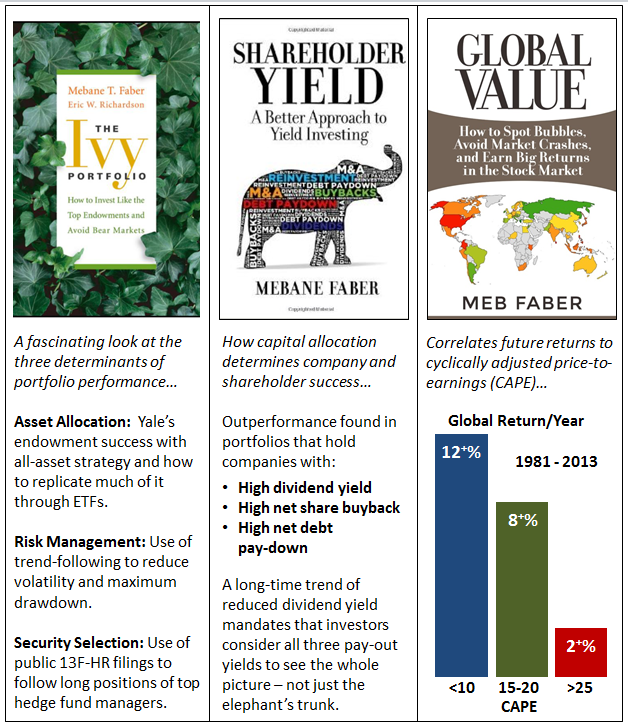 As summarized above, each contains straight-forward strategies that investors can follow on their own using publically available information. That said, each also forms the basis of ETFs launched by Cambria Investment Management.

The First Fund. Last December, Mebane tweeted “Diversification was deworseification in 2013.” To understand what he meant, just compare US stock return against just about all other asset classes – it trounced them. Several all-asset strategies have underperformed during the current bull market, as seen in the comparison below, including AdvisorShares Cambria Global Tactical ETF Fund (GTAA). GTAA was Cambria’s first ETF, launched in November 2010, as a sub-advisor through ETF house AdvisorShares, and based on the strategy outlined in “The Ivy Portfolio.” 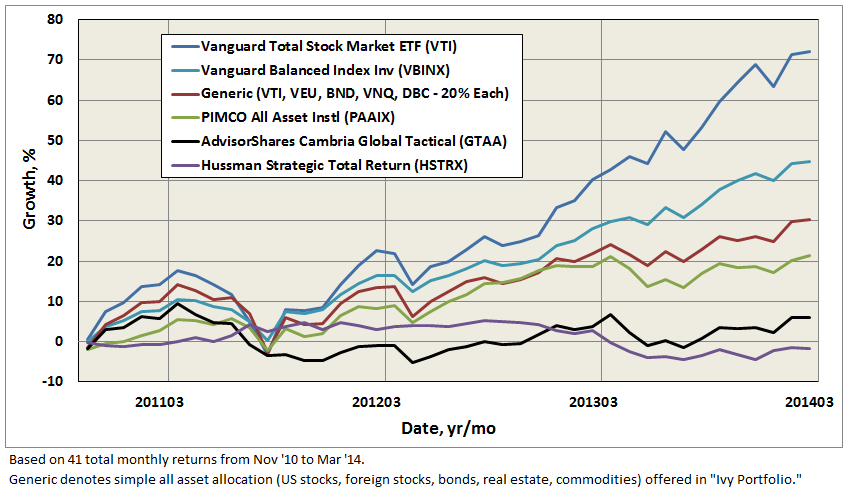 If it helps, Mebane is in good company. Rob Arnott’s all asset and John Hussman’s total return strategies have not received much love lately either. In fact, since GTAA’s inception, the “generic” all-asset allocation of US stocks, foreign stocks, bonds, REITs, and broad commodities has underperformed US equity index by 40% and traditional 60/40 balanced index by 15%.

GTAA’s actual portfolio currently shows more than 50 holdings, virtually all ETFs. Looking back, the fund has held substantial cash at times, approaching 40% in mid-2013…”assuming a defensive posture and utilizing cash as an alternative to its long positions.”

Market volatility has likely hurt GTAA as well. Its timing strategy, shown to thrive in trending markets, can struggle with short-term gyrations, which have been present in commodity, foreign equity, and real estate markets during this time. Finally, AdvisorShares’ high expense ratio, even after waivers, only adds to the headwind.  At the 3.5-year mark, GTAA remains at $36M assets under management (AUM).

The New Funds. Cambria has since launched three other ETFs, based on the strategies outlined in Mebane’s two new books, but this time the funds were kept in-house to have “control over the process and charge reasonable fees.” Each fund invests in some 100 companies with capitalizations over $200M. And, each has quickly attracted AUM, rather remarkably given the proliferation of ETFs today. They are:

GVAL is the newest and actually tracks to a Cambria-developed index, maintained daily. It focuses on companies that trade 1) below their assessed intrinsic value, and 2) in countries with the most undervalued markets determined by parameters like CAPE, as depicted in earlier figure. These days, Mebane believes that means outside the US. “We certainly don’t think the [US] market is in a bubble, rather, valuations will be a headwind. There are much better opportunities abroad.”

SYLD is actively managed and focuses primarily on US companies that exhibit strong characteristics of returning free cash flow to their shareholders; specifically, “shareholder yield,” which comprises dividend payments, share buybacks, and debt pay-down. FYLD seeks the same types of companies, but in developed foreign countries and it passively tracks to Cambria’s FYLD index.

Mebane believes that these are the first ETFs to incorporate the shareholder yield strategy. And, based on their reception in the crowded ETF market, he seems pretty pleased: “I certainly think alpha is possible…lots of jargon across smart beta, alpha, etc., but beating a market cap index is a great first step.” Morningstar’s Samuel Lee noted them among best new ETFs of 2013. Approaching its first year, SYLD is certainly off to a strong start:

Interestingly, none of these three ETFs employ explicit draw-down control or trend-following, like GTAA, although GVAL does “start moving to cash if markets don’t pass an absolute valuation filter … no sense in buying what is cheapest when everything is expensive,” Mebane explains. SYLD too has the discretion to take the entire portfolio to “Temporary Defensive Positions.”

When asked if his approach to risk management is changing, given the incorporation of more traditional strategies, he asserts that he’s “still a firm believer in trend-following and future funds will have trend components.” (Other funds in pipeline at Cambria include Global Momentum ETF and Value and Momentum ETF).

Mebane remains one of the largest shareholders on record among the portfolio managers at AdvisorShares. His overall skin-in-the-game? “100% of my investable net worth is in our funds and strategies.”

The Blog. mebfaber.com (aka “World Beta”) started in November 2006. It is a pleasant blend of perspective, opinion, results from his and other’s research – quantitative and factual, images, and references. He shares generously on  both personal and professional levels, like in the recent posts “My Investing Mentor” and “How to Start an ETF.”

There is a great reading list and blogroll. There are sources for data, references, and research papers. It’s free, with occasional plugs, but no annoying pop-ups. For the more serious investors, fund managers, and institutions, he offers a premium subscription to “The Idea Farm.”

He once wrote actively for SeekingAlpha, but stopped in 2010, explaining: “I find the quality control of the site is poor, and the respect for authors to be low.  Also, [it] becomes a compliance risk and headache.”

He strikes me as having the enviable ability to absorb enormous about of information, from past lessons to today’s water-hose of publications, blogs, tweets, and op-eds, then distill it all down to chart a way forward. Asked whether this comes naturally or does he use a process, he laughs: “I would say it comes unnaturally and painfully!”