The fund seeks a combination of growth and income. Northern Trust’s Investment Policy Committee develops tactical asset allocation recommendations based on economic factors such as GDP and inflation; fixed-income market factors such as sovereign yields, credit spreads and currency trends; and stock market factors such as domestic and foreign earnings growth and valuations. The managers execute that allocation by investing in other Northern funds and ETFs. As of 12/30/2014, the fund held three Northern funds and eight ETFs.

Northern Trust Investments is part of Northern Trust Corp., a bank founded in 1889. The parent company provides investment management, asset and fund administration, fiduciary and banking solutions for corporations, institutions and affluent individuals worldwide. As of June 30, 2014, Northern Trust had assets under custody of $6.0 trillion, and assets under investment management of $924.4 billion. The Northern funds account for about $52 billion in assets. When these folks say, “affluent individuals,” they really mean it. Access to Northern Institutional Funds is limited to retirement plans with at least $30 million in assets, corporations and similar institutions, and “personal financial services clients having at least $500 million in total assets at Northern Trust.” Yikes. There are 42 Northern funds, nine sub-advised by multiple institutional managers.

Northern Trust representatives report that, “that the SAI update will show Bob Browne and Jim McDonald each own BBALX shares in the $100,001-$500,000 range, and Daniel Phillips owns shares in the $1-$10,000 range.” Only one of the fund’s nine trustees has invested in it, though most have substantial investments across the fund complex.

Northern Institutional Balanced, this fund’s initial incarnation, launched in July 1, 1993. On April 1, 2008, this became an institutional fund of funds with a new name, manager and mission and offered four share classes. On August 1, 2011, all four share classes were combined into a single no-load retail fund.

When we reviewed BBALX in 2011 and 2012, Morningstar classified it as a five-star moderate allocation fund. We made two points:

Here we are in 2015, following up on BBALX. Morningstar now classifies it as a two star moderate allocation fund. We’d like to make two points:

We’ll take those points in order.

It’s a really intriguing fund. As the ticker implies, BBALX began life is a bland, perfectly respectable balanced fund that invests in larger US firms and investment grade US bonds. Northern’s core clientele are very affluent people who’d like to remain affluent, so Northern tends toward “A conservative investment approach . . . strength and stability . . . disciplined, risk-managed investment . . .” which promises “peace of mind.” The fund was mild-mannered and respectable, but not particularly interesting, much less compelling.

In April 2008, the fund morphed from conservative balanced to a global tactical fund of funds. At a swoop, the fund underwent a series of useful changes.

The strategic or “neutral” asset allocation became more aggressive, with the shift to a global portfolio and the addition of a wide range of asset classes.

Execution of the portfolio plan was through index funds and, increasingly, factor-tilted ETFs, mostly Northern’s FlexShare products. For any given asset class, the FlexShare ETFs modestly overweight factors such as dividends, quality and size which predict long-term outperformance.

Both the broadened strategic allocation and the flexibility of the tactical shifts have increased shareholder returns and reduced their risk. Compared to a simple benchmark of 60% global stocks/40% bonds, the strategic allocation adds about 50 basis points of return (4.4% vs 3.9, since inception) while reducing volatility by about 70 bps (11.6% versus 12.3%). The tactical shifts have produced dramatic improvements, adding 110 bps of return while trimming 100 bps of volatility. 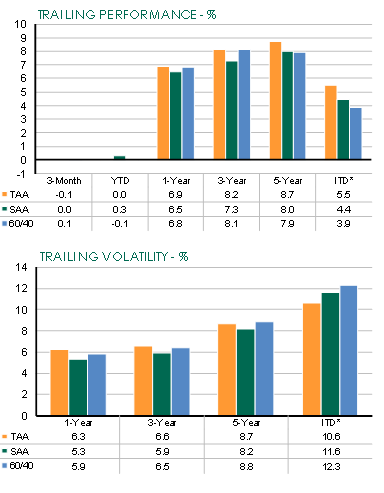 In short, Northern has managed since inception to produce about 40% more upside than a global balanced benchmark while suffering about 15% less volatility.

But it’s not a moderate allocation fund. Morningstar’s moderate allocation group is dominated by funds like the pre-2008 BBALX; lots of US large caps, lots of intermediate term, investment grade bonds and little prospect for distinction. That’s an honorable niche but it is not a fair benchmark for BBALX. A quick comparison of the portfolios highlights the difference:

When US markets dominate, as they have in four of the past five years, funds with a strong home bias will typically outperform those with a global portfolio.

With BBALX, you get a truly global asset allocation, disciplined management and remarkably low operating and trading expenses.

Over longer period, the larger opportunity set available to global investors – assuming that they’re not offset by higher expenses – gives them a distinct and systemic advantage. With BBALX, you get a truly global asset allocation, disciplined management and remarkably low operating and trading expenses.

Over both the full market cycle (November 2007-present) and the upmarket cycle (March 2009-present), BBALX is competitive with the best global allocation funds in existence. Here are the full-cycle risk-return metrics:

Here’s how to read the table: the three ratios at the end measure risk-adjusted returns. For them, higher is better. The Maximum Drawdown, Downside Deviation and Ulcer Indexes are measures of risk. For them, lower is better. APR is the annual percentage return. In general, your best investments over the period – the GMO funds – aren’t available to mere mortals, they require minimum investments of $10 million. Northern has been a better investment than either BlackRock or Capital Income Builder.

The pattern is similar if we look just at the rebound from the market bottom in 2009. Ivy, not available in 2007, gets added to the mix. GMO leads while BBALX remains one of the best options for retail global investors. 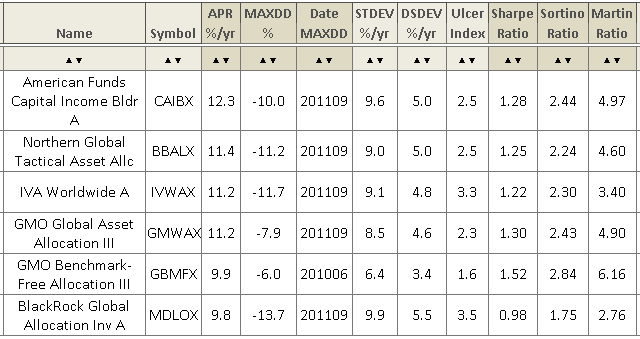 In short, the fund’s biggest detriment is that it’s misclassified, not that it’s underperforming.

There is a very strong case to be made that BBALX might be a core holding for two groups of investors. Conservative equity investors will be well-served by its uncommonly broad diversification, risk-consciousness and team management. Young families or investors looking for their first equity fund would find it one of the most affordable options, no-load with low expenses and a $250 minimum initial investment for folks willing to establish an automatic investment plan. Frankly, we know of no comparable options. This remains a cautious fund, but one which offers exposure to a diverse array of asset classes. It has used its flexibility and low expenses to outperform some very distinguished competition. Folks looking for an interesting and affordable core fund owe it to themselves to add this one to their short-list.

Northern Global Tactical Asset Allocation.  Northern has an exceptional commitment to transparency and education; they provide a lot of detailed, current information about what they’re up to in managing the fund. A pretty readable current introduction is 2015 Outlook: Watching our Overweights (12/2014).

I have owned shares of BBALX in my personal portfolio for about three years. My intent is to continue making modest, automatic monthly additions.