The fund pursues long-term capital growth by investing, primarily, in a diversified portfolio of US small cap stocks. The advisor defines small cap in relation to the Russell 2000 Value Index; currently that means stocks with capitalizations under $3.3 billion. The portfolio is assembled by looking at stocks with low P/E and P/CF ratios, whose underlying firms have strong balance sheets and good management. The fund, which holds 39 common stocks and shares in one closed-end fund, is nominally non-diversified. The fund’s cash position is a residue of market opportunities. In times when the market is rich with opportunities, they deploy cash decisively. In 2009, for instance, they moved to under 3% cash. As markets have increasingly become richly-priced, the cash stake has grown. Over the past five years it has averaged 24% which is also where it stands in early 2015.

Bragg Financial Advisors, headquartered in Charlotte, NC, just across from the Dowd YMCA. They used to be located on Queens Road. Bragg is a family firm with four Braggs (founder Frank as well as sons Benton, John and Phillips) and one son-in-law (manager Steven Scruggs) leading the firm. It has been around since the early 1970s, and manages approximately $850 million in assets. A lot of that is for 300 families in the Charlotte region.

Steven Scruggs, CFA. Mr. Scruggs has worked for BFA since 2000 and manages this fund and Queens Road Value (QRVLX). That’s about it. No separate accounts, hedge funds or other distractions. He does not have research analysts but the firm’s investment committee oversees the progress of the portfolio as a whole.

Based on the liquidity of their holdings, that is their ability to get into and out of positions without disrupting the market, they anticipate about $800 million in capacity. They’d likely soft close the fund at $800 million and hard close it “not far north of that.”

“Active share” measures the degree to which a fund’s portfolio differs from the holdings of its benchmark portfolio. High active share indicates management which is providing a portfolio that is substantially different from, and independent of, the index. The advisor does not calculate active share for their funds. Mr. Scruggs argues that, “By the nature of our process, we’re not going to look like the index. Whether that’s a good thing or a bad thing, I can’t say.” Indeed, measured by sector weightings, the fund is demonstrably independent: the fund’s portfolio weights differ dramatically from its peer group in 10 of 11 industry sectors that Morningstar tracks.

Mr. Scruggs has invested between $100,000 and $500,000 in the fund. Though modest in absolute terms, he explains that he has “the overwhelming bulk – 90-95% – of my liquid investments” in the two funds he manages. In addition, all of the fund’s independent trustees have invested in it; three of the four have investments in excess of $100,000. Especially given their modest compensation, that level of commitment is admirable, rare and helpful.

Sometimes our greatest, and least understood, advantages, come from all of the things we don’t have. Like distractions. Second-guessers. Friends who talk us into trying hot new fashions. Or the fear of being canned if we make a mistake.

It’s sometimes dubbed “addition by subtraction.” Thomas Gray famously celebrated the virtue of being far from the temptation of the “in” crowd in his poem “Elegy Written in a Country Churchyard” (1751):

Far from the madding crowd’s ignoble strife
Their sober wishes never learn’d to stray;
Along the cool sequester’d vale of life
They kept the noiseless tenor of their way

How madding might the investment crowd be? Mr. Scruggs commends for your consideration a classic essay by Jeremy Grantham,  My Sister’s Pension Assets and Agency Problems. Mr. Grantham has been managing the pension investments for one of his sisters since 1968. She’s, in many ways, the ideal client: she’s not even vaguely interested in what the market has or has not been doing, she doesn’t meddle and isn’t going to fire him. That’s a far cry from the fate of most professional investors.

The central truth of the investment business is that investment behavior is driven by career risk. In the professional investment business we are all agents, managing other peoples’ money. The prime directive, as Keynes knew so well, is first and last to keep your job. To do this, he explained that you must never, ever be wrong on your own. To prevent this calamity, professional investors pay ruthless attention to what other investors in general are doing. The great majority “go with the flow,” either completely or partially. This creates herding, or momentum, which drives prices far above or far below fair price.

There are many other inefficiencies in market pricing, but this is by far the largest. It explains the discrepancy between a remarkably volatile stock market and a remarkably stable GDP growth, together with an equally stable growth in “fair value” for the stock market. This difference is massive – two-thirds of the time annual GDP growth and annual change in the fair value of the market is within plus or minus a tiny 1% of its long-term trend. The market’s actual price – brought to us by the workings of wild and wooly individuals – is within plus or minus 19% two-thirds of the time. Thus, the market moves 19 times more than is justified by the underlying engines!

Investors’ fears and fads feed off each other, they do what’s “hot” rather than what’s right, they chase the same assets and prices rise briskly. Until they don’t.

The success of the two small funds managed by Mr. Scruggs for Queens Road is remarkable. He has no fancy strategies or sophisticated portfolio tools. He measures a firm’s earnings and cash flow against normal, rather than abnormal, earnings. He tries to determine whether the management is likely able to continue growing earnings. If he sees a good margin of safety in the price, he buys. His preference is to be broadly diversified across sectors and industries to reduce the impact of sector-specific risks (such as oil price or interest rate changes). He won’t buy overpriced stocks just for the sake of obtaining sector exposure (he has no investments at all in five of Morningstar’s 11 sectors while his average peer has 24% of their portfolio in those sectors) but, on whole, he thinks broader exposure is more prudent than not. In the past year, his portfolio turnover has been zero. In short, he’s not trying to outsmart the market, he’s just trying to do his job: prudently compound his investors’ capital over time.

Mr. Scruggs believes that his fund will be competitive in healthy rising markets and superior in declining ones but will likely trail noticeably in frothy markets, those driven by investor frenzy rather than fundamentals. He anticipates that, across the entirety of a five-to-seven year market cycle, he’ll offer his investors somewhat better than average returns with much less heartburn.

The question is: how does Queens Road stand up to the best funds, not just to the average ones. The short answer is: really quite well. The table below compares the performance of Queens Road to the three SCV funds that Morningstar designates as “the best of the best” and the low-cost default, Vanguard’s index. This data all reflects performance over the current market cycle, from the last peak in November 2007 to March 2015. For the sake of clarity, we’ve highlighted in blue the best performer in each category.

What do we see?

The advisor illustrates the same point by looking the fund’s performance during all of the quarters in which the Russell 2000 Value index fell: 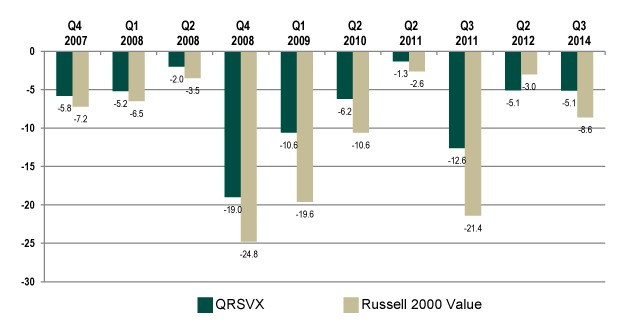 For those counting, the fund outperformed its benchmark in nine of 10 down quarters.

When they don’t find stocks that are unreasonably cheap given their companies’ prospects, they let cash accumulate. As of the last portfolio disclosure, cash about 24% of the portfolio. That doesn’t reflect a market call, it simply reflects a shortage of stocks that offer a sufficient margin of safety:

[H]istory says we’re due for a pullback and we think it makes sense to be prepared. How do we prepare? As we’ve often said, by not making a drastic move in the portfolio. As esteemed money manager, Peter Lynch once said, “Far more money has been lost by investors trying to anticipate corrections than has ever been lost in corrections themselves.”

So why hasn’t he fallen into the trap that Mr. Grantham describes? That is, does he actually have a sustainable advantage as an investor? The fund’s 2014 Annual Report suggests three:

This is where we think we have an advantage …. First, we live in Charlotte, North Carolina, far away from the investment swirl and noise of New York, Boston or Chicago. Second, we are not a huge fund shop with a massive sales force/marketing division. Fall behind your peers for a few quarters, or heaven forbid, you lag for a couple of years at a big fund shop, and you’ve got the marketing guys in your office asking you, “What are you doing wrong? You gotta change something.” Third, we believe in our process. Collectively, our fund manager, investment committee, Board of Directors, and family have over $3 million of our own money invested in our Queens Road Funds … We understand the investment process. We are comfortable under-performing during certain periods. And we have the patience to stay the course.

Most of us are best served by funds whose managers speak clearly, buy cautiously, sell rarely, and keep out of the limelight. It’s clear that thrilling funds are a disastrous move for most of us. The funds that dot the top of last year’s performance list have a real risk of landing on next year’s fund liquidation list. Investors who understand the significance of “for the long-term” in the phrase “stocks for the long-term” come to have patience with their portfolios; that patience willingness to let an investment play out over six years rather than six months distinguishes successful investors from the herd. Based on his record over the past 13 years, Mr. Scruggs has earned the designations patient, disciplined, successful. If you aspire to the same, the two Queens Road funds should surely be on your due-diligence list.