This fund of funds seeks to provide long-term capital appreciation and income. As a fund of funds, Vanguard STAR invests in other Vanguard mutual funds.  It places 60% to 70% of its assets in common stocks through eight stock funds; 20% to 30% of its assets in bonds through two bond funds; and 10% to 20% of its assets in short-term investments through a short-term bond fund. The stock funds emphasize larger, well-established companies and the bond funds focus on securities issued by highly-rated borrowers. Vanguard calls it their “one fund option for investors looking for broad diversification across asset classes who can tolerate moderate market risk that comes from the volatility of the stock and bond markets.”

The Vanguard Group, Inc. The Japanese bestow the designation “Living National Treasure” on individuals of incomparable skill who work to preserve precious elements of the culture. If the US had such as designation, Vanguard founder Jack Bogle would certainly qualify for it. He founded Vanguard in May, 1975 as the industry’s only non-profit, investor-owned fund complex; in the succeeding decades he has been consistently, successfully critical of marketing-driven investing fads and high expenses. Vanguard advertises “at cost” investing and their investor expenses are consistently the industry’s lowest. They advise 160 U.S. funds (including variable annuity portfolios) and about 120 funds for non-U.S. investors. In total they have 20 million investors and are responsible for more than $3 trillion in assets.

Michael Buek, William Coleman and Walter Nejman. The guys are mostly responsible for which of the portfolio’s funds get a bit more money and which get a bit less. The list of which funds they use hasn’t changed since 2001 and the fund’s asset allocation wobbles just a little. Their responsibilities are so administrative that from 1985 to 2009, the fund listed itself as having “no manager.”

In general, you should look for funds whose managers invest a lot of their own money alongside your money. In this case, the managers have almost no investment in the fund but that’s not very important since their responsibilities are so limited.

$1,000. While Vanguard offers an automatic investing plan option, they don’t reduce the minimum for such accounts. That said, the STAR minimum is one-third of what Vanguard normally expects and the monthly minimum once you’ve opened an account is $1.

Why invest in Vanguard STAR? There are three reasons to consider it.

First, the fund invests in a way that is broadly diversified and reasonably cautious. 60-70% of its money is invested in stocks, 20-30% in bonds and 10-20% in conservative short-term investments. Its stock portfolio mostly focuses on large, well-established companies and it gives you more exposure to the world beyond the U.S. than most of its peers do. International stocks constitute 21% of the portfolio but are only 13% for its average peer. That means investors are being given access to some additional sources of gain that most comparable funds skip.

Second, Vanguard is very good. There are two sorts of funds, those which simply buy all of the stocks or bonds in a particular index without trying to judge whether they’re good or bad (these are called “passive” funds) and those whose managers try to invest in only the best stocks or bonds (called “active” funds). Vanguard typically hires outside firms to manage their active funds and they do a very good job of finding and overseeing good managers. Vanguard and its funds operate with far lower expenses than its peers, on average, 0.19% per year for funds investing primarily in U.S. stocks. Even Vanguard’s most expensive funds charge less than half as much as their industry peers. Every dollar not spent on running the fund is a dollar that remains in your account.

Third, STAR is the most accessible way to build a Vanguard portfolio. STAR builds its portfolio around 11 actively-managed Vanguard funds.  They are:

If you wanted to buy that same collection of funds one-by-one, you’d need to have $33,000 to invest. Dan Wiener, publisher of the well-respected Independent Advisor for Vanguard Investors newsletter, suggests eight funds in a model portfolio akin to STAR. That would require $24,000 upfront and you’d have to deal with the fact that PRIMECAP is no longer accepting new investors.

STAR has been around for 30 years and has been a quiet, reliable performer. Its portfolio represents a cautious approach to some investment types (for example, stocks in the emerging markets) that its peers mostly avoid. Coupled with its substantial cost advantage over its peers, STAR has been able to outperform three-quarters of its peers. It has returned about 7% per year over the past decade, about 1% per year above the competition, but has been a little less risky. It’s a great all-around fund designed to do well year after year rather than post eye-popping returns over the short term.

Vanguard STAR profile. You can keep track of your account by downloading the Vanguard app which works with iPhones, Android and Kindle. When you go to Vanguard’s “invest with us” page, here’s what you’ll see: 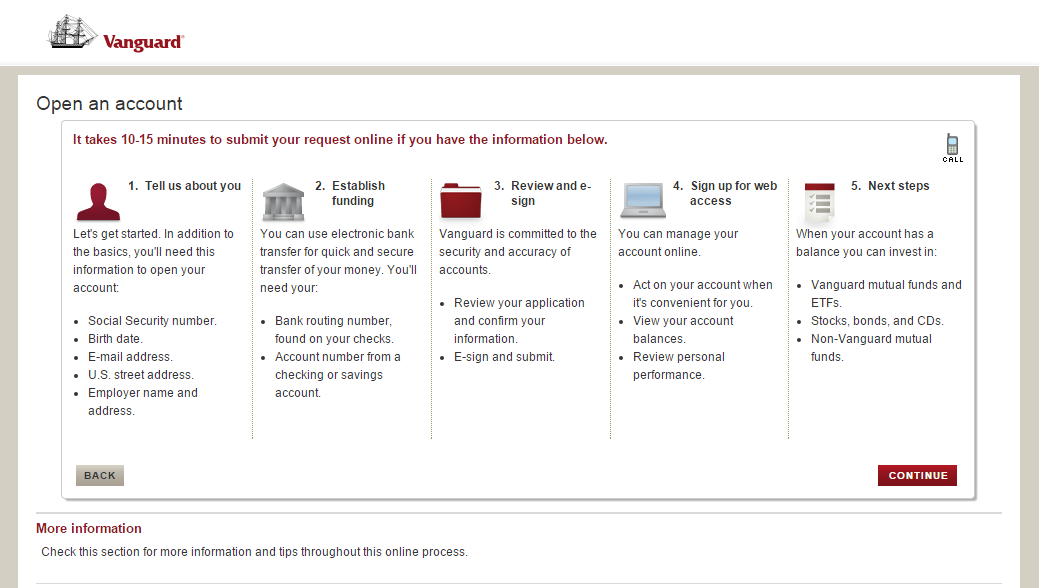 So you’ll need just seven pieces of information (eight if you include “your name”) to get started. When you’re asked what you’d like done with your dividends and capital gains, choose “reinvest them” so that the money stays in your account and keeps growing. Otherwise you’ll get them deducted from your account and mailed to you as a check.