The fund pursues long-term capital appreciation by investing in high quality small cap equities, which they’ll only buy and hold when they’re undervalued. “Small stocks” are stocks comparable in size to those in common indexes like the Russell 2000; currently, that means a maximum cap of $6.5 billion. The fund can hold domestic and international common stocks, preferred stocks, convertible preferred stocks, warrants, and options. They typically hold 15-50 securities. High quality businesses, typically, are “internally financed companies generating cash in excess of their business needs, with predictable revenue streams, and in industries with high barriers to entry.” The managers calculate the intrinsic value of a lot of small companies, though very few are currently selling at an acceptable discount to those values. As a result, the fund has about two-thirds of its portfolio in cash (as of March 2016). When opportunities present themselves, though, the managers deploy their cash quickly; in 2011, the fund moved from 40% cash down to 20% in the space of two weeks.

Intrepid Capital Management. Intrepid was founded in 1994 by the father and son team of Forrest and Mark Travis. It’s headquartered in Jacksonville, Florida; the location is part of a conscious strategy to distance themselves from Wall Street’s groupthink. Rather distinctively, their self-description stresses the importance of the fact that their managers have rich, active lives (“some of us surf … others spend weekends at kids’ football games”) outside of work. That focus “makes us a better company and better managers.” They are responsible for “approximately $800 million for individuals and institutional investors through a combination of separately managed accounts, no-load mutual funds, and a long/short hedge fund.” They advise six mutual funds.

Jayme Wiggins, Mark Travis and Greg Estes. Mr. Wiggins, whose first name is pronounced “Jay Mee,” is the lead manager and the guy responsible for the fund’s day-to-day operations. His career is just a bit complex: right after college, he joined Intrepid in 2002 where he worked as an analyst on the strategy before it even became a fund. In 2005 Jayme took over the high-yield bond strategy which, in 2007, was embodied in the new Intrepid Income Fund (ICMUX). In 2008, he left to pursue his MBA at Columbia. While he was away, Endurance’s lead manager Eric Cinnamond left to join River Road Asset Management. Upon his return in September 2010, Jayme became lead manager here. Mr. Travis is one of Intrepid’s founders and the lead manager on Intrepid Capital (ICMBX). Mr. Estes, who joined the firm in 2000, is lead manager of Intrepid Disciplined Value (ICMCX). Each member of the team contributes to each of the firm’s other funds.

The managers would likely begin discussions about the fund’s assets when it approaches the $1 billion level, but there’s no firm trigger level. What they learned from the past was that too great a fraction of the fund’s assets represented “hot money,” people who got excited about the fund’s returns without ever becoming educated about the fund’s distinctive strategy. When the short-term returns didn’t thrill them, they fled. The managers are engaged now in discussions about how to attract more people who “get it.” Their assessment of the type of fund flows, as much as their amount, will influence their judgment of how and when to act.

The underlying small cap strategy launched in October, 1998; the mutual fund was opened on October 3, 2005.

If those strike you as sensible premises, then two conclusions flow from them:

The average investor, individual and professional, consistently disregards those two principles. Cap-weighted index funds, by their very nature, are designed to throw your money at whatever’s been working recently, regardless of price or quality. If Stock A has doubled in value, its weighting in the index doubles and the amount of money subsequently devoted to it by index investors doubles. Conversely, if Stock B halves in value, its weighting is cut in half and so is the money devoted to it by index funds.

Most professional investors, scared to death of losing their jobs because they underperformed an index, position their “actively managed” funds as close to their index as they think they can get away with. Both the indexes and the closet indexers are playing a dangerous game.

How dangerous? The folks at Intrepid offer this breakdown of some of the hot stocks in the S&P 500:

Four S&P tech stocks—Facebook, Amazon, Netflix, and Google (the “FANGs”)—accounted for $450 billion of growth in market cap in 2015, while the 496 other stocks in the S&P collectively lost $938 billion in capitalization. Amazon’s market capitalization is $317 billion, which is bigger than the combined market values of Walmart, Target, and Costco. These three old economy retailers reported trailing twelve month GAAP net income of nearly $17 billion, while Amazon’s net income was $328 million.

As of late March, 2016, Amazon trades at 474 times earnings. The other FANG stocks sell for multiples of 77, 330 and 32. Why are people buying such crazy expensive stocks? Because everyone else is buying them.

That’s not going to end well.

The situation among small cap stocks is worse. As of April 1, 2016, the aggregate price/earnings ratio for stocks in the small cap Russell 2000 index is “nil.” It means, taken as a whole, those 2000 stocks had no earnings over the past 12 months. A year ago, the p/e was 68.4. In late 2015, the p/e ratios for the pharma, biotech, software, internet and energy sectors of the Russell 2000 were incalculable because those sectors – four of five are very popular sectors – have negative earnings.

“Small cap valuations,” Mr. Wiggins notes, “are pretty obscene. In historical terms, valuations are in the upper tier of lunacy. When that corrects, it’s going to get really bad for everybody and small caps are going to be ground zero.”

At the moment, just 50 of 2050 active U.S. equity mutual funds are holding significant cash (that is, 20% or more of total assets). Only nine small cap funds are holding out. That includes Intrepid Endurance whose portfolio is 67% cash.

Endurance looks for 30-40 high-quality companies, typically small cap names, whose prices are low enough to create a reasonable margin of safety. Mr. Wiggins is not willing to lower his standards – for example, he doesn’t want to buy debt-ridden companies just because they’re dirt cheap – just for the sake of buying something. You’ll see the challenge he faces as you consider the Observer’s diagram of the market’s current state and Endurance’s place in it. 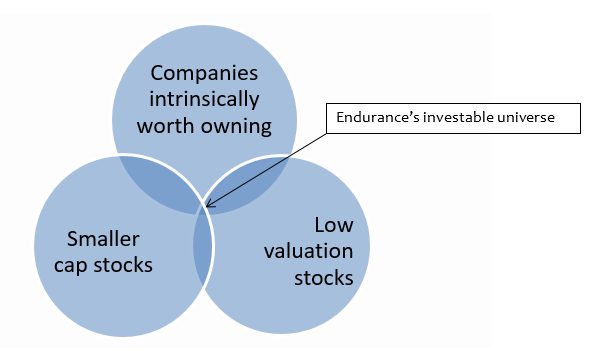 It wasn’t always that way. By his standards, “that small cap market was really cheap in ‘09 to fairly-priced in 2011 but since then it’s just become ridiculously expensive.”

For now, Mr. Wiggins is doing what he needs to do to protect his investors in the short term and enrich them in the longer term. He’s got 12 securities in the portfolio, in addition to the large cash reserve. He’s been looking further afield than usual because he’d prefer being invested to the alternative. Among his recent purchases are the common stock of Corus Entertainment, a small Canadian firm that’s Canada’s largest owner of women’s and children’s television networks, and convertible shares in EZcorp, an oddly-structured (hence mispriced) pawn shop operator in the US and Mexico.

While you might be skeptical of a fund that’s holding so much cash, it’s indisputable that Intrepid Endurance has been the single best steward of its shareholders’ money over the full market cycle that began in the fall of 2007. We track three sophisticated measures of a fund’s risk-return tradeoff: its Sharpe ratio, Sortino ratio and Martin ratio.

Endurance has the highest score on all three risk-return ratios among all small cap funds – domestic, global, and international, value, core and growth.

We track short-term pain by looking at a fund’s maximum drawdown, its Ulcer index which measures the depth and duration of a drawdown, its standard deviation and downside deviation.

Endurance has the best or second best record, among all small cap funds, on all of those risk measures. It also has the best performance during bear market months.

And it has substantially outperformed its peers. Over the full cycle, Endurance has returned 3.6% more annually than the average small-value fund. Morningstar’s Katie Reichart, writing in December 2010, reported that “the fund’s annualized 12% gain during [the past five years] trounced nearly all equity funds, thanks to the fund’s stellar relative performance during the market downturn.”

Endurance is not a fund for the impatient or impetuous. It’s not a fund for folks who love the thrill of a rushing, roaring bull market. It is a fund for people who know their limits, control their greed and ask questions like “if I wanted to find a fund that I could trust to handle the next seven to ten years while I’m trying to enjoy my life, which would it be?” Indeed, if your preferred holding period for a fund is measured in weeks or months, the Intrepid folks would suggest you go find some nice ETF to speculate with. If you’re looking for a way to get ahead of the inevitable crash and profit from the following rebound, you owe it to yourself to spend some time reading Mr. Wiggins’ essays and doing your due diligence on his fund.

© Mutual Fund Observer, 2016. All rights reserved. The information here reflects publicly available information current at the time of publication. For reprint/e-rights contact us.