The Otter Creek Long/Short Opportunity Fund seeks long-term capital appreciation. They take long positions in securities they believe to be undervalued and short positions in the overvalued. Their net market exposure will range between (-35%) and 80%. They can place up to 20% in MLPs, 30% in REITs, and 30% in fixed income securities, including junk bonds. They use a limited amount of leverage. The fund is unusually concentrated with about 30 long and 30 short positions.

Otter Creek Advisors. Otter Creek Advisors was formed for the special purpose of managing this mutual fund and giving Messrs. Walling and Winter, the two primary managers, a substantial equity stake in the operation. That arrangement is part of a “succession plan to provide equity ownership to the next generation of portfolio managers: Mike Winter and Tyler Walling.” Otter Creek Advisers has about $280 million in assets under management.

R. Keith Long, Tyler Walling and Michael Winter. Mr. Long has a long and distinguished career in the financial services industry, dating back to 1973. Mr. Walling joins Otter Creek in 2011 after a five-year stint as an equity analyst for Goldman Sachs. Mr. Winter joined Otter Creek in 2007. Prior to Otter Creek, he worked for a long/short equity hedge fund and, before that, for Putnam Investment Management.

Somewhere “north of a billion” the team would consider a soft close. They were pretty emphatic that they didn’t want to become an asset sponge and that they were putting an enormous amount of care into attracting compatible investors.

$2,500, reduced to $1,000 for accounts established with an automatic investment plan.

In its first two-plus years of operation, Otter Creek Opportunity has been a very, very good long/short fund. Three observations lie behind that judgment.

First, it has made much more money than its generally sad sack peer group. From inception from the end of February, 2016, OTCRX posted annual returns of 10.2%. Its average peer lost 1% annually in the same period. During that stretch, it bested the S&P 500 in 15 of 25 calendar months and beat its peers in 17 of 25 months.

Second, it has provided exceptional downside protection. It outperformed the S&P 500 in 10 of the 11 months in which the index declined and consistently stayed in the range of tiny losses to modest gains in periods when the S&P 500 was down 3% or more. 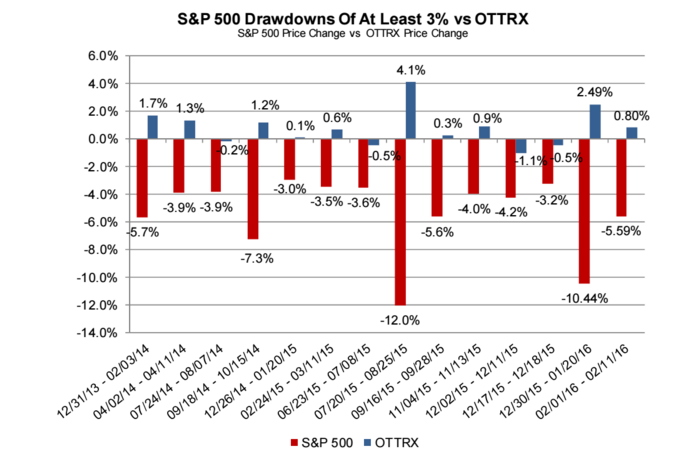 It also outperformed its long/short peers in nine of the 11 months in which the S&P 500 dropped. Since launch, the fund’s downside deviation has been only 40% of its peers and its maximum drawdown has been barely one-fourth as great as theirs.

What accounts for their very distinctive performance?

At base, the managers believe it’s because they focus. They focus, for example, on picking exceptional stocks. They are Graham and Dodd sorts of investors, looking for sustainably high return-on-equity, growing dividends, limited financial leverage and dominant market positions.  They use a “forensic accounting approach to financial statement analysis” to help identify not only attractive firms but also the places within the firm’s capital structure that holds the best opportunities. They tend to construct a focused portfolio around 30 or so long and short positions. On the flip side, they short firms that use aggressive accounting, weak balance sheets, wretched leadership and low quality earnings.

Which is to say, yes, they were shorting Valeant in 2015.

Their top ten long and short positions, taken together, account for about 70% of the portfolio. They’re both more concentrated and more patient, measured by turnover, than their peers.

They also focus on the portfolio, rather than just on individual names for the portfolio. They’ve created a series of rules, drawing on their prior work with their firm’s hedge fund, to limit mishaps in their short portfolio. If, for example, a short position begins to get “crowded,” that is, if other investors start shorting the same names they do, they’ll reduce their position size to avoid the risk of a short squeeze. Likewise they substantially reduce or eliminate any short that moves against the portfolio by 25% or more over the course of six months.

Messrs. Walling and Winter bear watching. They’ve got a healthy attitude and have done a lot right in a short period. As of mid-February, they had a vast performance advantage over the S&P 500 and their peers. Even after the S&P’s furious six-week rally, they are still ahead – and vastly ahead if you take the effects of volatility into account. It’s clear that they see this fund as a long-term project, they’re excited by it and they’re looking for the right kind of investors to join in with them. If you’re looking to partner with investors who don’t like volatility and detest losing their shareholders money, you might reasonably add OTCRX to your short-list of funds to investigate.

© Mutual Fund Observer, 2016. All rights reserved. The information here reflects publicly available information current at the time of publication. For reprint/e-rights contact us.