The Fund seeks to provide long-term growth of capital. The plan is to invest in 25-40 microcap stocks that are attractively priced relative to their growth prospects. Across the firm, the managers favor companies which have sustainable earnings growth rates, high returns on equity, low debt levels, and capable management teams. The strategy aims to produce consistent returns with low volatility and reduced downside capture.

Conestoga Capital Advisors, LLC. Headquartered outside of Philadelphia, Conestoga had its origins in the 1980s but the firm itself wasn’t incorporated as an independent advisor until 2001. Across all of its manifestations, the strategy focuses on creating high-conviction portfolios of high-quality conservative growth investments. Two of the firm’s four founders remain onboard. As of March 31, 2022, Conestoga managed approximately $7.7 billion in assets. The firm has grown steadily since its inception and has remained 100% employee-owned.

The lead portfolio managers are David Neiderer and Joseph Monahan, with founder Robert Mitchell sort of hovering in the background. That same team managed its predecessor limited partnership.

Mr. Neiderer joined Conestoga Capital Advisors in July 2013, became a Partner in 2018 and provides research support for the Small and SMid Cap strategies as well. Prior to joining Conestoga, David had similar responsibilities as a Research Analyst at both Penn Capital and Chartwell Investment Partners. He is a CPA, a CFA Charterholder, and a member of the CFA Society of Philadelphia.

Mr. Monahan is Conestoga’s Director of Research. He joined Conestoga in 2008 after serving as a portfolio manager and SVP at McHugh Associates. He is a CFA Charterholder
and a member of the CFA Society of Philadelphia.

Mr. Mitchell is one of the firm’s four co-founders and its Chief Investment Officer.

Approximately $500 million. While there is no formal policy on closing funds to new investors, their flagship Small Cap fund and strategy has already been closed to new investors.

None yet reported. The managers’ ownership of the flagship Small Cap fund is modest but, Morningstar reports, the managers have committed much of their investable wealth to acquiring the shares of the advisor from retiring partners. Mr. Mitchell has invested between $500,00 and $1 million in Small Cap while Mr. Monahan has invested between $100,001 and $500,000 here.

The Fund was launched on December 17, 2021. The strategy began life as a limited partnership, also called the Conestoga Micro Cap Fund, LP, on November 30, 2018 which means it’s coming up on its five-year anniversary.

In general, there are two entirely rational approaches to growth investing.

Approach #1: Buy high quality companies which provide steady earnings growth and steady dividend growth. Resist the impulse to get twitchy and allow growth to compound over a period of years. “Great businesses at a fair price,” in Mr. Buffett’s parlance.

Approach #2: Buy high-quality companies which provide steady earnings growth but which are also selling at a discount to their prospects. Allow growth to compound over a period of years and harvest additional gains that come when other investors discover their original mistake and reprice the stock.

Conestoga does the second, does it very well and has been doing it consistently for a period of decades. That record is embodied in the $3.3 billion flagship Conestoga Small Cap Fund (CCASX / CCALX ) which Morningstar celebrates:

The approach follows reasonable, clear guidelines. The managers target firms that can grow earnings at least 15% per year and generate 15% or more return on equity over the next three to five years. Low debt and decent insider ownership help. The team has long built its portfolio on mostly profitable, financially healthy companies relative to its small-growth Morningstar Category peers and the Russell 2000 Growth Index. Conestoga has also managed capacity pretty well, closing the fund to most new investors in 2018 amid a spike in assets. (Tony Thomas, Morningstar analysis, 9/16/2021)

Over the past 15 years, Conestoga Small Cap is one of the 10 best small cap growth funds or ETFs whether measured by total return, Sharpe ratio, maximum drawdown, bear market deviation, down market deviation or Ulcer Index (a measure of the combined depth and length of a fund’s worst fall).

It is also much of the reason to consider its microcap sibling.

The case for microcaps

Investing Approach #2 benefits from the managers’ ability to find mis-priced assets. Mispricing occurs when other investors conclude that an asset isn’t worth their time (Vanguard, for instance, can’t afford to be interested in microcap stocks because their total effect on a huge Vanguard fund would come down to a rounding error) or is too hard to assess or access (as in the case of international small caps). As a result, the median number of institutional analysts for microcap stocks is one (BMO, The Case for Microcap Investing, 2017).

There are nearly 5000 US companies with market caps of $1 billion or less, a common threshold for “microcap.” Many of those tiny firms are undoubtedly screwed up, which leads investors to discount the entire group. Conestoga argues that there are phenomenal, low-debt, high-quality businesses available if only you know how to look. Those higher quality microcaps have higher returns, lower volatility, better Sharpe ratios and better Sortino ratios than their peers. Low-debt microcaps returned 9.5% annually from 2000-17, which is 130 bps above microcaps as a whole and 175 bps higher than the Russell 2000 Index (Foundry Partners, 2018). Over long periods, microcaps decisively outperform stocks of any other size … but that outperform comes at the price of higher volatility.

If you become a specialist in understanding investments that others barely grasp, and in understanding how to assemble them as a portfolio that won’t implode, you can generate serious gains for your investors. That’s Conestoga’s niche and core competency. Their portfolio companies have stronger revenue and earnings growth, higher gross margins, stronger return on equity, and substantially less debt than their microcap peers as a whole.

The record of the Conestoga Micro Cap, which includes its years as a limited partnership and which is reported in the fund’s regulatory documents, shows many of the same strengths we see in its sibling. 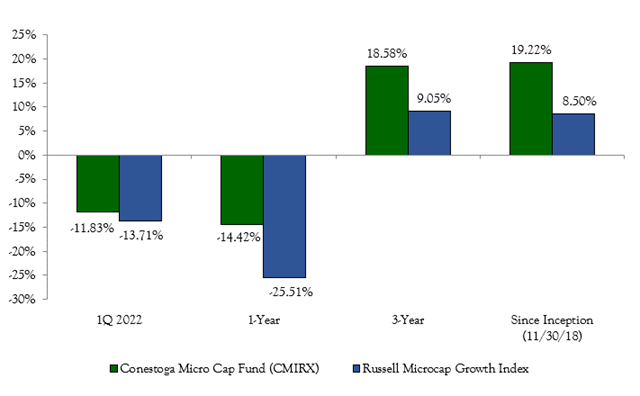 In the three years since its launch, it appears that the strategy has outperformed in exuberant markets (2020), tepid ones (2021), and declining ones (2022, through April). 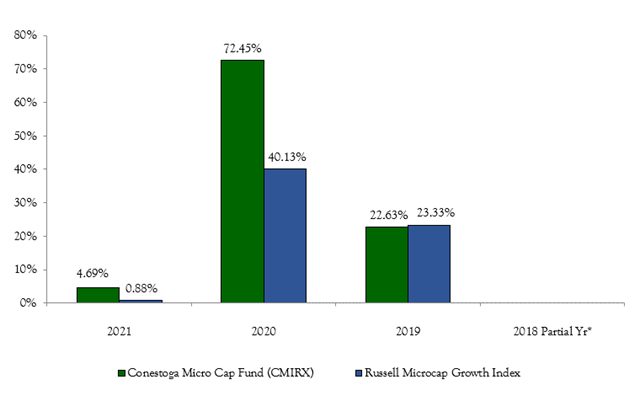 The Micro Cap portfolio is an extension of Small Cap’s, with many firms that they’ve researched but concluded were too small for the Small Cap fund included in Micro Cap. Indeed, 11 stocks appear in both portfolios. The team concludes:

Our conviction in the portfolio companies remains high, and we believe that our emphasis on higher-quality companies that are generating profits, with low debt levels, and high returns on equity will be rewarded during more volatile markets over the long-term.

For the past 15 years, the key driver of performance for risk assets has been a combination of near zero interest rates (aka “free money”) and the unquestioned faith that the Fed would always step in to keep the stock market from falling too far (aka “the Fed put”). That has, richly, rewarded momentum-based strategies that concentrated on fewer and fewer stocks that were larger and larger.

If you are an equity investor who suspects that those heady days are gone now, you need to look where the crowd hasn’t gone and you need managers who are skilled in the patient management of risk in pursuit of long-term returns. On whole, Conestoga Micro Cap warrants a place on your due diligence list.

Neither the fund’s homepage nor the strategy’s yet offers a huge amount of immediate information, but the material is clear and the quarterly commentaries are steady and sensible.