Last month David pointed out how little overlap he found between three popular mutual fund lists: Kiplinger 25, Money 70, and Morningstar’s Fantastic 51. David mused: “You’d think that if all of these publications shared the same sensible goal – good risk-adjusted returns and shareholder-friendly practices – they’d also be stumbling across the same funds. You’d be wrong.”

He found only one fund, Dodge & Cox International Fund DODFX, on all three lists. Just one! Although just one is a statistically better outcome than randomly picking three such lists from the 6600 or so mutual funds and 1000 ETFs, it does seem surprisingly small.

Opening up the field a little, by replacing the Fantastic 51 with a list of 232 funds formed from Morningstar’s current “Gold-Rated Funds” and “Favorite ETFs,” the overlap does not improve much. Just two funds appear in all three publications: DODFX and Habor Bond Institutional HABDX. Just two!

While perhaps not directly comparable, the table below provides a quick summary of the criteria used by each publication. Money 70 criteria actually include Morningstar’s so-called stewardship grade, which must be one of the least maintained measures. For example, Morningstar awarded Bruce Berkowitz Fund Manager of the Decade, but it never published a stewardship grade for Fairholme. 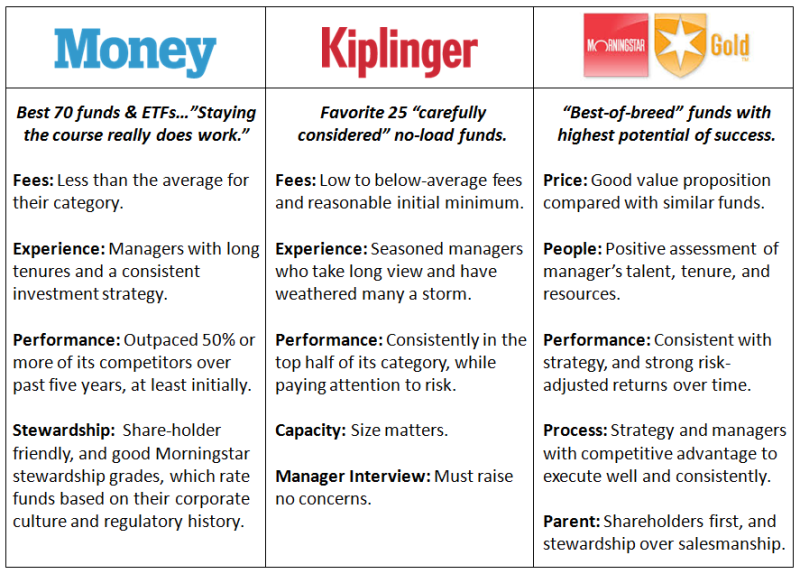 Overall, however, the criteria seem quite similar, or as David described “good risk-adjusted returns and shareholder-friendly practices.”  Add in experienced managers for good measure and one would expect the lists to overlap pretty well. But again, they don’t.

How do the “forward-looking” recommendations in each of these lists fare against Morningstar’s purely quantitative “backward-looking” performance rating system? Not as well as you might think. There are just seven 5-star funds on Money’s list, or 1-in-10. Kiplinger does the best with six, from a percentage perspective, or almost 1-in-4. (They must have peeked.) Morningstar’s own list includes 44 5-star funds, or about 1-in-5. So, as well intentioned and “forward looking” as these analysts certainly try to be, only a small minority of their “best funds” have delivered top-tier returns.

On the other hand, they each do better than picking funds arbitrarily, if not unwittingly, since Morningstar assigns 5 stars to only about 1-in-17 funds. Neither of the two over-lapping funds that appear on all three lists, DODFX and HABDX, have 5 stars. But both have a commendable 4 stars, and certainly, that’s good enough.

Lowering expectations a bit, how many funds appear on at least two of these lists? The answer: 38, excluding the two trifectas. Vanguard dominates with 14. T. Rowe Price and American Funds each have 4. Fidelity has just one. Most have 4 stars, a few have 3, like SLASX, probably the scariest.

There are, however, nine 5-star funds among the 38, or just about 1-in-4. That’s not bad. Interestingly, not one is a fixed income fund, which is probably a sign of the times. Here’s how they stack-up in MFO’s own “backward looking” ratings system, updated through September: 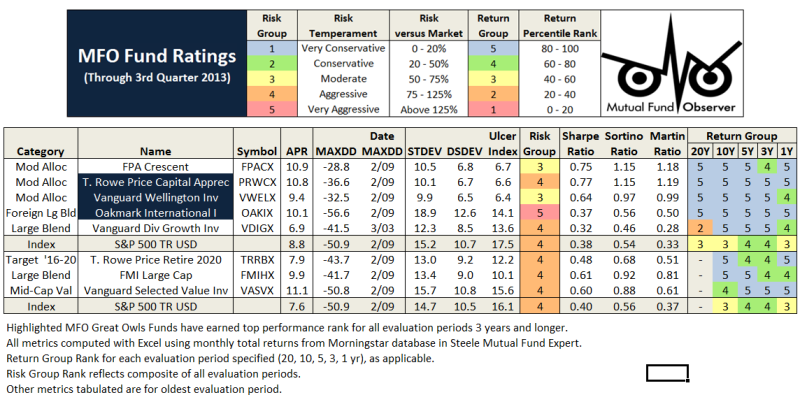 Four are moderate allocation funds: FPACX, PRWCX, VWELX, and TRRBX. Three are Vanguard funds: VWELX, VDIGX, and VASVX. One FMI fund FMIHX and one Oakmark fund OAKIX. Hard to argue with any of these funds, especially the three Great Owls: PRWCX, VWELX, and OAKIX.

These lists of “best funds” are probably not a bad place to start, especially for those new to mutual funds. They tend to expose investors to many perfectly acceptable, if more mainstream, funds with desirable characteristics: lower fees, experienced teams, defensible, if not superior, past performance.

They probably do not stress downside potential enough, so any selection needs to also take risk tolerance and investment time-frame into account. And, incredulously, Morningstar continues to give Gold ratings to loaded funds, about 1-in-7 actually.

The lists produce surprisingly little overlap, perhaps simply because there are a lot of funds available that satisfy the broad screening criteria. But within the little bit of overlap, one can find some very satisfying funds.

Money 70 and Kiplinger 25 are free and online. Morningstar’s rated funds are available for a premium subscription. (Cheapest path may to subscribe for just one month each year at $22 while performing an annual portfolio review.)

As for a list of smaller, less well known mutual funds with great managers and intriguing strategies? Well, of course, that’s the niche MFO aspires to cover.