From the Mutual Fund Observer discussion board, November 2012

Several recent posts prompted me to take a closer look at DODGX historical performance. Ted posted the most recent: Dodge & Cox: The San Francisco Treat. Basically, an article from Morningstar defending why D&C has been a top pick for years, based on a strong corporate fiduciary culture and long term record, despite its struggle in 2008 and poor stock selections since, like HPQ, a DODGX heavy for years. hank and Shostakovich made good comments about AUM, definition of value, intrinsic risk management, and debated whether a better approach for a value shop is to be all-in or have some assets in cash at times.

An earlier post: 3 Former Star Funds to Avoid, a stunner by Steve Goldberg, which challenged DODGX exalted status, pointing to “deep flaws in the fund’s stock picking” in 2008 and mediocre performance since. The article took its share of lashings from most, but not all, MFO readers.

I lamented a bit on an earlier related post: Dodge & Cox Balanced Regains Its Stride, Finally? A look back at my decision to buy DODBX over VWELX in 2002. This post includes more recent entries describing HPQ’s 13% plunge on Oct 3. scott weighed in on transient nature of defining value for technology companies. (This week HPQ had another 12% downer-day on suspected fraud disclosure over recent acquisition. Can you believe? This is Hewlett Packard for crying out loud. Good grief.) And fundalarm noted how Dodge & Cox doesn’t appear to “have price targets at which point to book profits or cut losses,” which again brings into question D&C’s risk management philosophy.

OK, stage set. I was very interested in looking at DODGX from a perspective both before and after the real estate collapse in 2008. With David’s assertion that folks are more concerned about loses than gains, and VintageFreaks’ comment about it’s “WHEN you buy, not WHAT you buy,” I looked at worst-case rolling performance, initiated every month over the periods noted, from DODGX’s inception in Feb 65. 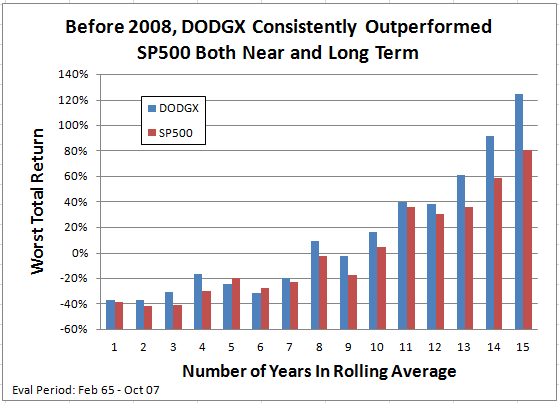 Note also that DODGX lost virtually no money for any 8-year or longer period, whereas an unlucky investor in SP500 could still be looking at nearly 20% loss, even after 9 years. 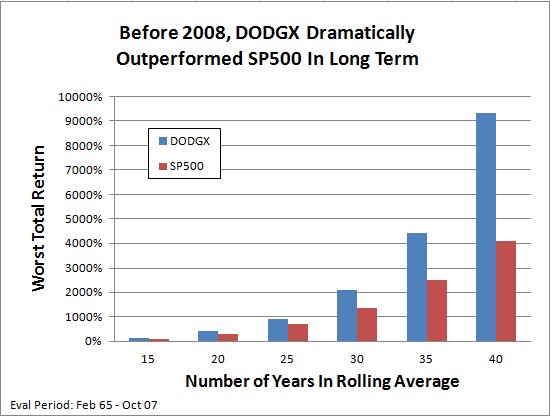 After 2007, however, an investor could have worse return in near-term with DODGX than with SP500: 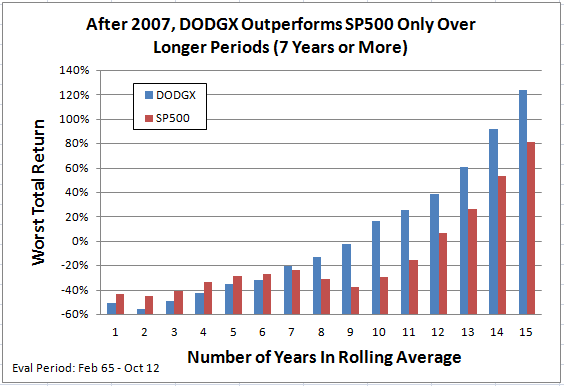 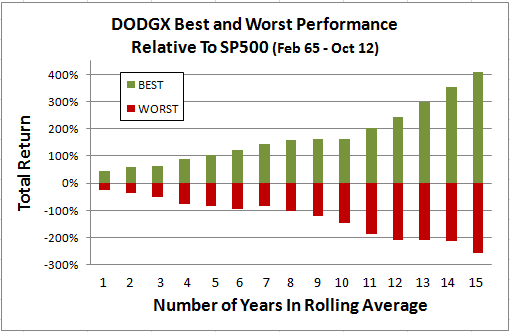 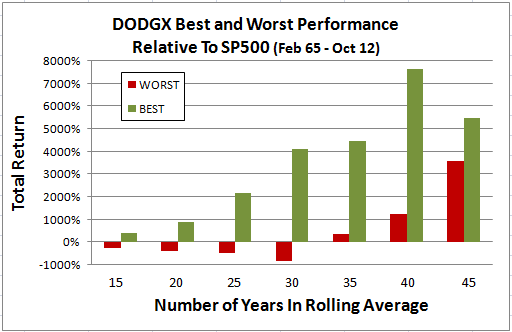 Clearly, there are periods when DODGX has under-performed the SP500, especially over the short-term. But then its periods of over-performance tend to be more impressive. Over its life, DODGX has bested the SP500 hands-down.

Taking a closer look at WHEN, data from above two charts are tabulated below, along with ending month/year of the corresponding best and worst periods. At a glance, most of the best over-performance were during periods leading up to the real estate bubble in 2008, while most of the worst under-performance actually occurred in the years leading up the tech bubble in 2000.

Going still further, the chart below shows growth comparison from DODGX inception through 1987 market crash. Basically, for first 20 plus years of DODGX existence, it beat SP500 handsomely overall. Perhaps more important is that DODGX performed comparable to the market, within 2-4%, during the five or so significant down-markets during this time. 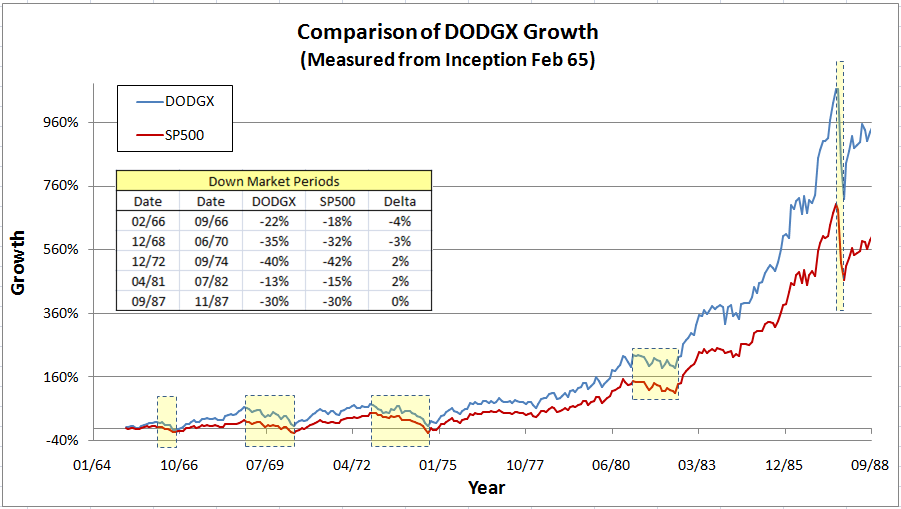 Then, during the next 20 years, shown below, DODGX had its most extraordinary performance, which surely helped establish the many recommendations for DODGX, by M*, Kiplinger, and others. 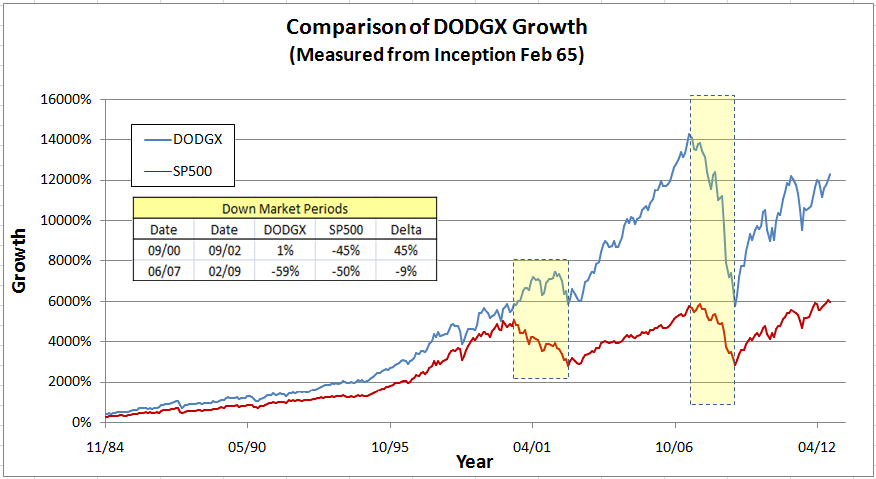 Leading up to late ’90s, DODGX actually lagged the SP500 somewhat; in fact, that’s where its worst total returns relative to SP500 actually occurred. But when the tech bubble popped in 2000, DODGX sailed-on through. While the SP500 lost 45% in the down-market from Sep 00 through Sep 02, DODGX lost nothing. In the five years after the bubble, it continued to handsomely beat the SP500. No doubt, DODGX’s stellar reputation was born during this extraordinary period of performance. Everybody clamored to get in, AUM grew, and the fund closed. It had become the perfect equity fund, avoiding down-side losses, while over-performing in up-markets. Until, of course, 2007. The funny thing here is that DODGX lost only 9% more than the SP500 during the great recession, but its reputation–that of being the perfect equity fund–was tarnished, if not shattered.

Just a few more comparisons, and I will stop, promise.