A quick follow-up to our feature on Mebane Faber in the May commentary, entitled “The Existential Pleasure of Engineering Beta.”

On May 16, Mebane posted on his blog “Skin in the Game – My Portfolio,” which states that he invests 100% of his liquid net worth in his firm’s funds: Global Tactical Hedge Fund (private), Global Value ETF (GVAL), Shareholder Yield ETF (SYLD), Foreign Shareholder Yield ETF (FYLD) – all offered by Cambria Investment Management.

His disclosure meets the “Southeastern Asset Management” rule, as coined and proposed by our colleague Ed Studzinski. It would essentially mandate that all employees of an investment firm limit their investments to funds offered by the firm. Ed proposes such a rule to better attune “investment professionals to what should be their real concern – managing risk with a view towards the potential downside, rather than ignoring risk with other people’s money.”

While Mr. Faber did not specify the dollar amount, he did describe it as “certainly meaningful.” The AdvisorShares SAI dated December 30, 2013, indicated he had upwards of $1M invested in his first ETF, Global Tactical ETF (GTAA), which was one of largest amounts among sub-advisors and portfolio managers at AdvisorShares.

Then, on June 5th, more clarity: “The two parties plan on separating, and Cambria will move on” from sub-advising GTAA and launch its own successor Global Momentum ETF (GMOM) at a full 1% lower expense ratio. Here’s the actual announcement: 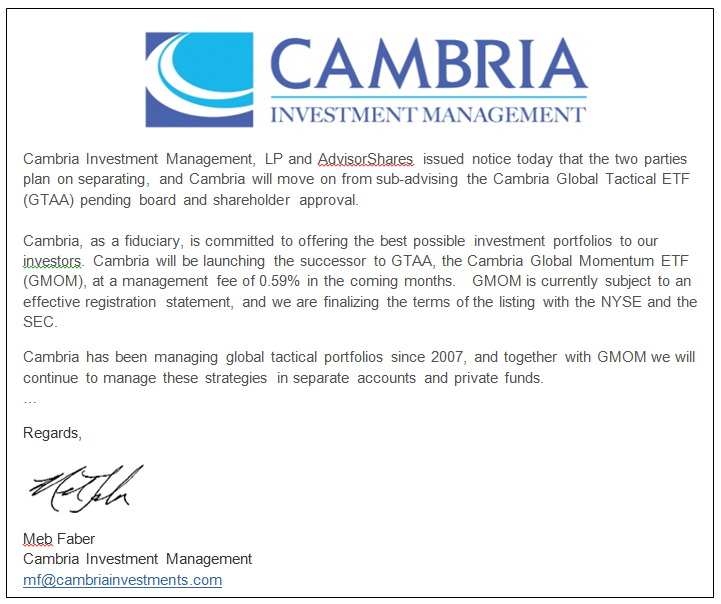 Same day, AdvisorShares announced: “After a diligent review and careful consideration, we have decided to propose a change of GTAA’s sub-advisor. At the end of the day, our sole focus remains our shareholders’ best interests…” The updated SAI indicates the planned split is to be effective end of July. 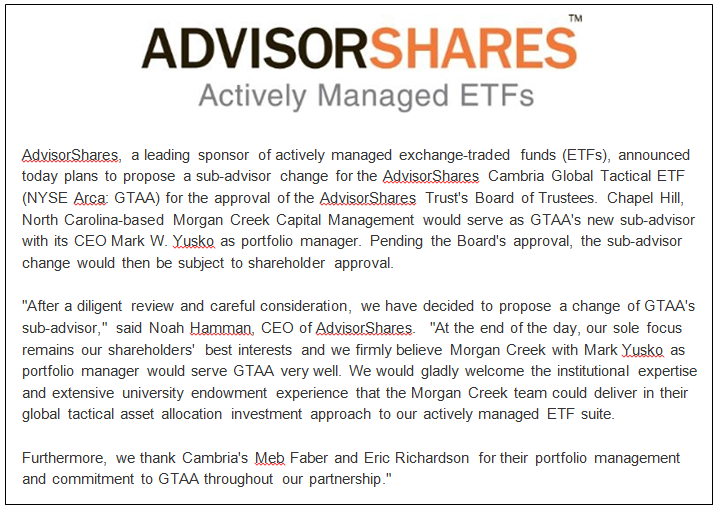 Given the success of Cambria’s own recently launched ETFs, which together represent AUM of $357M or more than 10 times GTAA, the split is not surprising. What’s surprising is that AdvisorShares is not just shuttering GTAA, but chose instead to propose a new sub-advisor, Mark Yusko of Morgan Creek Capital Management.

On the surface, Mr. Yusko and Mr. Faber could not be more different. The former writes 25 page quarterly commentaries without including a single data graph or table. The latter is more likely to give us 25 charts and tables without a single paragraph.

When we asked Mebane for a recent photo to use in the May feature, he did not have one and sent us a self-photo taken with his cell phone. In contrast, Mark Yusko offers a professionally produced video introducing himself and his firm, accompanied with scenes of a lovely creek (presumably Morgan’s) and soft music.

Mr. Yusko says “I don’t mind paying [egregious] fees as long as my net return is really high.” While Mr. Faber made a point during the recent Wine Country Conference that a goal for Cambria is to “disrupt the traditional high fee mutual fund and hedge fund business, mostly through launching ETFs.”

The irony here is that GTAA was founded on the tenants described in Mebane’s first book “The Ivy Portfolio,” which includes attempting to replicate Yale’s endowment success with all-asset strategy using an ETF.

Mr. Yusko’s earned his reputation managing the endowments at Notre Dame and University of North Carolina, helping to transform them from traditional stock/bond/cash portfolios to alternative hedge fund/venture capital/private investment portfolios. But WSJ reports that he was asked to step-down last year as CIO of the $3.5B Endowment Fund, which also attempted to mimic endowments like Yale’s. He actually established the fund in partnership with Salient Partners LP in 2004. “After nearly a decade of working with our joint venture partner in Texas, we found ourselves differing on material aspects of how to best run an endowment portfolio and run the business…” Perhaps with AdvisorShares, Mark Yusko will once again be able to see eye-to-eye.

As for Mebane? We will look forward with interest to the launch of GMOM, his continued insights and investment advice shared generously, and wish him luck in his attempts to disrupt the status quo.