Prolific MFO board contributor Scott first made us aware of the fund in August 2012 with the post “Somewhat Interesting Tiny Fund.” David profiled its more market neutral and less tactical (less directionally oriented) sibling WBLFX in April 2013. I discussed WBMIX in the October 2013 commentary, calling the fund proper “increasingly hard to ignore.” Although the fund proper was young, it possessed the potential to be “on the short list … for those who simply want to hold one all-weather fund.”

WBMIX recently pasted its three year mark and at $865M AUM is no longer tiny. Today’s question is whether it remains an interesting and compelling option for those investors looking for alternatives to the traditional 60/40 balanced fund at a time of interest rate uncertainty and given the two significant equity drawdowns since 2000.

Consequently, toward middle of last year, Tactical Opportunities (TO) moved away from its long bias to market neutral. Mr. Redleaf explained the portfolio now looks to be long “reasonably priced” (since cheap is hard to find) quality companies and be short over-priced storybook companies (some coined “Never, Nevers”) that would take many years, like 17, of uninterrupted growth to justify current prices.

The following table from its recent quarterly commentary illustrates the rationale: 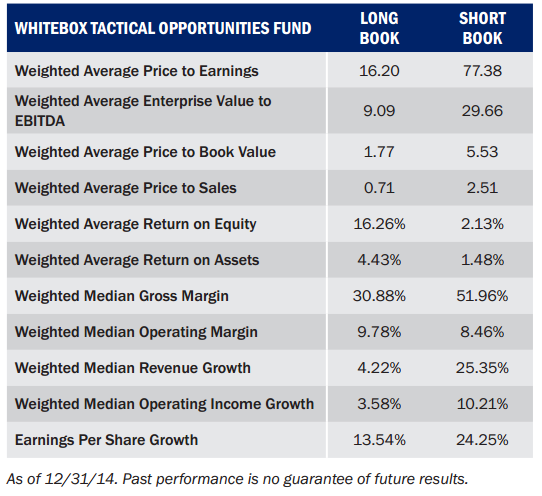 Mr. Redleaf holds a deep contrarian view of efficient market theory. He works to exploit market irrationalities, inefficiencies, and so-called dislocations, like “mispriced securities that have a relationship to each other,” or so-called “value arbitrage.” Consistently guarding against extreme risk, the firm would never put on a naked short. Its annual report reads “…a hedge is itself an investment in which we believe and one that adds, not sacrifices returns.”

But that does not mean it will not have periods of underperformance and even drawdown. If the traditional 60/40 balanced fund performance represents the “Mr. Market Bus,” Whitebox chose to exit middle of last year. As can be seen in the graph of total return growth since WBMIX inception, Mr. Redleaf seems to be in good company. 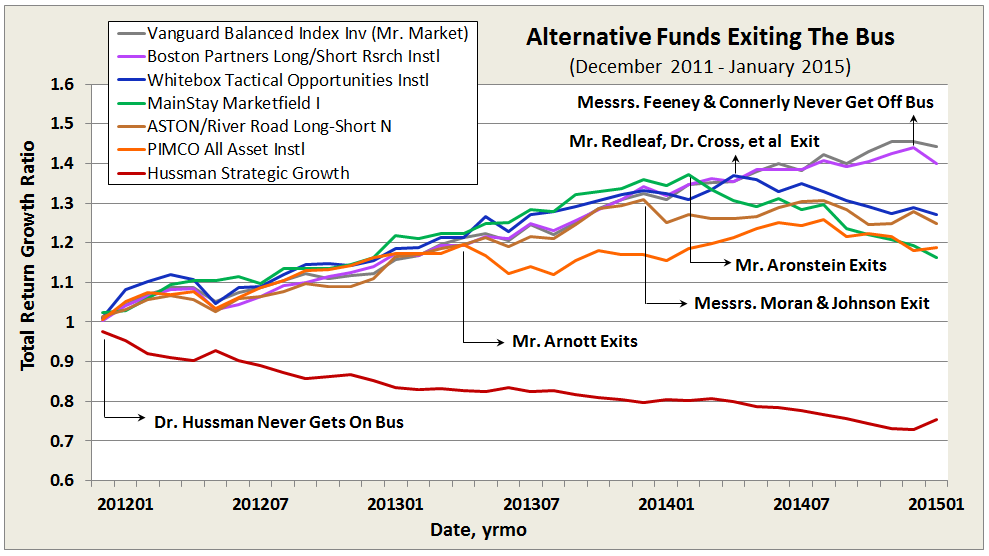 Whether the “exit” was a because of deliberate tactical moves, like a market-neutral stance, or because particular trades, especially long/short trades went wrong, or both … many alternative funds missed-out on much of the market’s gains this past year, as evidenced in following chart:

But TO did not just miss much of the upside, it’s actually retracted 8% through February, based on month ending total returns, the greatest amount since its inception in December 2011; in fact, it has been retracting for ten consecutive months. Their explanation:

Put bluntly, the stocks we disfavored most (and were short) were among the stocks investors remained enamored with.

A more conservative strategy would call for moving assets to cash. (Funds like ASTON RiverRoad Independent Value, which has about 75% cash. Pinnacle Value at 50%. And, FPA Crescent at 44%.) But TO is more aggressive, with attendant volatilities above 75% of SP500, as it strives to “produce competitive returns under multiple scenarios.” This aspect of the fund is more evident now than back in October 2013.

Comparing its performance since launch against other long-short peers and some notable alternatives, WBMIX now falls in the middle of the pack, after a strong start in 2012/13 but disappointing 2014:

From the beginning, Mr. Redleaf has hoped TO would be judged in comparison to top endowments. Below are a couple comparisons, first against Yale and Harvard, which report on fiscal basis, and second against a simple Ivy asset allocation (computed using Alpha Architect’s Allocation Tool) and Vanguard’s 60/40 Balanced Index. Again, a strong showing in 2012/13, but 2014 was a tough year for TO (and Ivy).

Beyond strategy and performance, the folks at Whitebox continue to distinguish themselves as leaders in shareholder friendliness – a much welcomed and refreshing attribute, particularly with former hedge fund shops now offering the mutual funds and ETFs. Since last report:

These ratios exclude the mandatory reporting of dividend and interest expense on short sales and acquired fund fees, which make all long/short funds inherently more expensive than long only equity funds. The former has been running about 1%, while the latter is minimal with selective index ETFs.

All that said, they could do even better going forward:

Ed, author of two articles on “Skin in the Game” (Part I & Part II), would warn: “If you want to get rich, it’s easier to do so by investing the wealth of others than investing your own money.”

In conclusion, does the fund’s strategy remain interesting? Absolutely. Thoughtfulness, logic, and “arithmetic” are evident in each trade, in each hedge. Those trades can include broad asset classes, wherever Mr. Redleaf and team deem there are mispriced opportunities at acceptable risk.

Another example mentioned on the call is their longstanding large versus small theme. They believe that small caps are systematically overpriced, so they have been long on large caps while short on small caps. They have seen few opportunities in the credit markets, but given the recent fall in the energy sector, that may be changing. And, finally, first mentioned as a potential opportunity in 2013, a recent theme is their so-called “E-Trade … a three‐legged position in which we are short Italian and French sovereign debt, short the euro (currency) via put options, and long US debt.”

Does the fund’s strategy remain compelling enough to be a candidate for your one all-weather fund? If you share a macro-“market” view similar to the one articulated above by Mr. Redleaf, the answer to that may be yes, particularly if your risk temperament is aggressive and your timeline is say 7-10 years. But such contrarianism comes with a price, shorter-term at least.

During the call, Dr. Cross addressed the current drawdown, stating that “the fund would rather be down 8% than down 30% … so that it can be positioned to take advantage.” This “positioning” may turn out to be the right move, but when he said it, I could not help but think of a recent post by MFO board member Tampa Bay:

Mr. Redleaf is no ordinary investor, of course. His bet against mortgages in 2008 is legendary. Whitebox Advisers, LLC, which he founded in 1999 in Minneapolis, now manages more than $4B.

He concluded the call by stating the “path to victory” for the fund’s current “intelligent value” strategy is one of two ways: 1) a significant correction from current valuations, or 2) a fully recovered economy with genuine top-line growth.

Whitebox Tactical Opportunities is facing its first real test as a mutual fund. While investors may forgive not making money during an upward market, they are notoriously unforgiving losing money (eg., Fairholme 2011), perhaps unfairly and perhaps to their own detriment, but even over relatively short spans and even if done in pursuit of “efficient management of risk.”