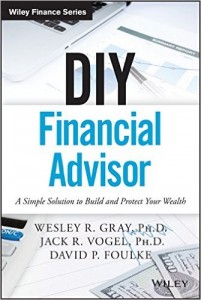 The title comes from the AlphaArchitect’s DIY Investing site, which is led by Wesley Gray. We profiled the firm’s flagship ValueShares US Quantitative Value ETF (QVAL) last December. Wes, along with Jack Vogel and David Foulke, recently published the Wiley Finance Series book, “DIY Finanical Advisor – A Simple Solution to Build and Protect Your Wealth.” It’s a great read.

It represents a solid answer to the so-called “return gap” problem described by Jason Hsu of Research Associates during Morningstar’s ETF Conference yesterday. Similar to and inspired by Morningstar’s “Investor Return” metric, Jason argues that investors’ bad decisions based on performance chasing and bad timing account for a 2% annualized short-fall between a mutual fund’s long-term performance and what investors actually receive. (He was kind enough to share his briefing with us, as well are his background position paper.)

“Investors know value funds achieve a premium, but they are too undisciplined to stay the course once the value fund underperforms the market.” It’s not just retail investors, Jason argues the poor behavior has actually been institutionalized and at some level may be worst for institutional investors, since their jobs are often based on short-term performance results.

In order to be good investors, the book suggests that we need to appreciate our natural preference for coherent stories over evidence that conflicts with the stories. Don’t be the pigeon doing a “pellet voodoo dance.”

It advocates adoption of simple and systematic investment approaches that can be implemented by normal folks without financial background. The approaches may not be perfect, but they have been empirically validated, like the capture of value and momentum premiums, to work “for a large group of investors seeking to preserve capital and capture some upside.”

Wes details how and why Harry Markowitz, who won the Nobel Prize in 1990 for his groundbreaking work in portfolio selection and modern portfolio theory, used a simple equal-weight 50/50 allocation between bond and equities when investing his own money.

The book alerts us to fear, greed, complexity, and fear tactics employed by some advisors and highlights need for DIY investors to examine fees, access/liquidity, complexity, and taxes when considering investment vehicles.

It concludes by stating that “as long as we are disciplined and committed to a thoughtful process that meets our goals, we will be successful as investors. Go forth and be one of the few, one of the proud, one of the DIY investors who took control of their hard-earned wealth. You won’t regret the decision.”

As with Wes’ previous book, Quantitative Value: A Practitioner’s Guide to Automating Intelligent Investment and Eliminating Behavioral Errors, DIY Financial Advisor is chock full of both anecdotes and analytical results. He and his team at AlphaArchitect continue to fight the good fight and we investors remain the beneficiaries.