One should forgive one’s enemies, but not before they are hanged.

So, we are one-third through another year, and things still continue to be not as they should be, at least to the prognosticators of the central banks, the Masters of the Universe on Wall Street, and those who make their livings reporting on same, at Bubblevision Cable and elsewhere. I am less convinced than I used to be that, for media commentators, especially on cable, the correct comparison is to The Gong Show. More often than not, I think a more appropriate comparison is to the skit performed by the late, great, and underappreciated Ernie Kovacs, “The Song of the Nairobi Trio.”

And lest I forget, this is the day after another of Uncle Warren’s Circuses, held in Omaha to capacity crowds. An interesting question there is whether, down the road some fifty years, students of financial and investing history discover after doing the appropriate first order original source research, that what Uncle Warren said he did in terms of his investment research methodology and what he in reality did, were perhaps two different things. Of course, if that were the case, one might wonder how all those who have made almost as good a living selling the teaching of the methodology, either through writing or university programs, failed to observe same before that. But what the heck, in a week where the NY Times prints an article entitled “Obama Lobbies for His Legacy” and the irony is not picked up on, it is a statement of the times. 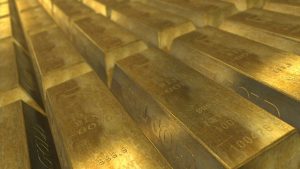 The best performing asset class in this quarter has been – gold. Actually the best performing asset class has been the gold miners, with silver not too far behind. We have had gold with a mid-teen’s total return. And depending on which previous metals vehicle you have invested in, you may have seen as much as a 60%+ total return (looking at the germane Vanguard fund). Probably the second best area generically has been energy, but again, you had to choose your spots, and also distinguish between levered and unlevered investments, as well as proven reserves versus hopes and prayers.

I think gold is worth commenting on, since it is often reviled as a “barbarous relic.” The usual argument against it that it is just a hunk of something, with a value that goes up and down according to market prices, and it throws off no cash flow.

I think gold is worth commenting on, since it is often reviled as a “barbarous relic.”

That argument changes of course in a world of negative interest rates, with central banks in Europe and one may expect shortly, parts of Asia, penalizing the holding of cash by putting a surcharge on it (the negative rate).

A second argument against it is that is often subject to governmental intervention and political manipulation. A wonderful book that I still recommend, and the subjects of whom I met when I was involved with The Santa Fe Institute in New Mexico, is The Predictors by Thomas A. Bass. A group of physicists used chaos theory in developing a quantitative approach to investing with extensive modeling. One of the comments from that book that I have long remembered is that, as they were going through various asset and commodity classes, doing their research and modeling, they came to the conclusion that they could not apply their approach to gold. Why? Because looking at its history of price movements, they became convinced that the movements reflected almost always at some point, the hand of government intervention. An exercise of interest would be to ponder how, over the last ten years, at various points it had been in the political interests of the United States and/or its allies, that the price of gold in relation to the price of the dollar, and those commodities pegged to it, such as petroleum, had moved in such a fashion that did not make sense in terms of supply and demand, but made perfect sense in terms of economic power and the stability of the dollar. I would suggest, among other things, one follow the cases in London involving the European banks that were involved in price fixing of the gold price in London. I would also suggest following the timetable involving the mandated exit of banks such as J.P. Morgan from commodity trading and warehousing of various commodities.

Exeunt, stage left. New scenario, enter our heroes, the Chinese. Now you have to give China credit, because they really do think in terms of centuries, as opposed to when the next presidential or other election cycle begins in a country like the U.S. Faced with events around 2011 and 2012 that perhaps may have seemed to be more about keeping the price of gold and other financial metrics in synch to not impact the 2012 elections here, they moved on. We of course see that they moved on in a “fool me once fashion.” We now have a Shanghai metals exchange with, as of this May, a gold price fixing twice a day. In fact, I suspect very quickly we will see whole set of unintended consequences. China is the largest miner of gold in the world, and all of its domestic supply each year, stays there. As I have said previously in these columns, China is thought to have the largest gold reserves in the world, at in excess of 30,000 tons. Russia is thought to be second, not close, but not exactly a slouch either.

So, does the U.S. dollar continue as the single reserve currency (fiat only, tied solely to our promise to pay) in the world? Or, at some point, does the Chinese currency become its equal as a reserve currency? What happens to the U.S. economy should that come to pass? Interesting question, is it not? On the one hand, we have the view in the U.S. financial press of instability in the Chinese stock market (at least on the Shanghai stock exchange), with extreme volatility. And on the other hand, we have Chinese companies, with some degree of state involvement or ownership, with the financial resources to acquire or make bids on large pieces of arable land or natural resources companies, in Africa, Australia, and Canada. How do we reconcile these events? Actually, the better question is, do we even try and reconcile these events? If you watch the nightly network news, we are so self-centered upon what is not important or critical to our national survival, that we miss the big picture.

Which brings me to the question most of you are asking at this point – what does he really think about gold? Some years ago, at a Grant’s Interest Rate Observer conference, Seth Klarman was one of the speakers and was asked about gold. And his answer was that, at the price it was at, they wanted to have some representation, not in the physical metal itself, but in some of the gold miners as a call option. It would not be more than 5% of a portfolio so that in the event it proved a mistake, the portfolio would not be hurt too badly (the opposite of a Valeant position). If the price of gold went up accordingly, the mine stocks would perhaps achieve a 5X or 10X return, which would help the overall returns of the portfolio (given the nature of events that would trigger those kinds of price movements). Remember, Klarman above all is focused on preserving capital.

And that is how I pretty much view gold, as I view flood insurance or earthquake insurance. Which, when you study flood insurance contracts you learn does not just cover flooding but also cases of extreme rain where, the house you built on the hill or mountain goes sliding down the hill in a massive mudslide. So when the catastrophic event can be covered for a reasonable price, you cover it (everyone forgets that in southern Illinois we have the New Madrid fault, which the last time it caused a major quake, made recent California or Japanese events seem like minor things). And when the prices to cover those events become extreme, recognizing the extreme overvaluation of the underlying asset, you should reconsider the ownership (something most people with coastal property should start to think about).

Twenty-odd years ago, when I first joined Harris Associates, I was assigned to cover DeBeers, the diamond company, since we were the largest shareholders in North America. I knew nothing about mining, and I knew nothing about diamonds, but I set out to learn. I soon found myself in London and Antwerp studying the businesses and meeting managements and engineers. And one thing I learned about the extractive industries is you have to differentiate the managements. There are some for whom there is always another project to consume capital. You either must expand a mine or find another vein, regardless of what the price of the underlying commodity may be (we see this same tendency with managements in the petroleum business). And there are other managements who understand that if you know the mineral is there sitting in the ground, and you have a pretty good idea of how much of it is there, you can let it sit, assuming a politically and legally stable environment, until the return on invested capital justifies bringing it out. For those who want to develop this theme more, I suggest subscribing to Grant’s Interest Rate Observer and reading not just its current issues but its library of back issues. Just remember to always apply your own circumstances rather than accept what you read or are told.