It feels like an unusually consequential month for some of the fund industry’s most trusted voices. Scott Burns, long-time Dallas Morning News columnist, announced his retirement after “40 years of deadlines, 36 in national syndication. That’s over 5,000 columns and more than 3.5 million words.”  Rather than share final thoughts on personal finance (which you should have been able to glean from his preceding 3.5 million words), Scott offered “collection of columns that I wrote by leaving my computer, office and comfort zone.” If you write him, he’ll share a copy of them.

Bob Cochran, a member of MFO’s Board of Directors and one of the principals at PDS Planning in Columbus, Ohio, is phasing into retirement by year’s end and has agreed to share guidance with us from the series of choices he’s going to be making along the way.

Chuck Jaffe continues negotiating his separation from the Dow-Jones empire.  The on-again, off-again decision by DJ to continue hosting his column was, at last check, on again but the minions of the empire seem a bit inconstant. Chuck’s radio show, which is an independent enterprise, will continue unaffected.

Dan Weiner, a friend of MFO but most famously the guy behind the very successful Independent Adviser for Vanguard Investors newsletter, announced that his firm bought Braver Wealth Management, LLC and Braver Capital Management this week. That gives him a $4.7 billion wealth management company with 3,000 clients and a good newsletter. The combined firm will retain the Adviser Investments name.

All of us who follow MFO’s (mostly mutual fund) discussion board are profoundly saddened that Ted’s health no longer permits him to actively participate. Ted’s daily routine was to rise long before dawn and begin posting links to important fund and finance stories, even before the coffee was done brewing. (Yikes!) Over a span of two decades and three discussion boards (Brill’s MFI, FundAlarm, and MFO) Ted has shared hundreds of thousands of links and provoked tens of thousands of discussions. He and his wife Lynn remain in our thoughts and in our hearts.

Thanks, as ever, to The Shadow whose tenebrous excellence surprises even the folks at Morningstar.

Effective at the close of business on February 28, 2017, the outstanding Class A and Class C shares of the Thomas White International Fund (TWWIX) and the Thomas White Emerging Markets Fund (TWEMX) will be converted into Class I shares. Not to suggest gaming the system, but I’d imagine that investors interested in the funds would want to immediately buy “C” class shares, knowing that they’ll become low-cost “I” shares within a month. That might well apply to current holders of higher-cost Investor class shares.

Because the Fund has experienced a delay in filing its 2016 annual report, it has been unable to update its Prospectus and Statement of Additional Information. Therefore, the Fund’s Board of Trustees has determined to temporarily suspend the sale of Fund shares.

Not sure what the underlying issue is, but VCAPX is structured as an interval fund, the complexities of which might account for the issue.

Kopernik Global All-Cap (KGGAX) is soft closing on March 31, 2017. The advisor’s explanation is almost cute: “The mutual fund is being soft-closed at around $1 billion because we know how inconvenient a hard close can be for clients.” The fund’s performance offers a fascinating case-study in the risk of looking at performance over standard reporting periods. Here’s Morningstar’s report of how they’ve been doing:

Whoa! David Iben, superstar investor, strikes again! The view changes a little when you look at a picture of the fund’s performance since inception. KGGAX is the blue line: 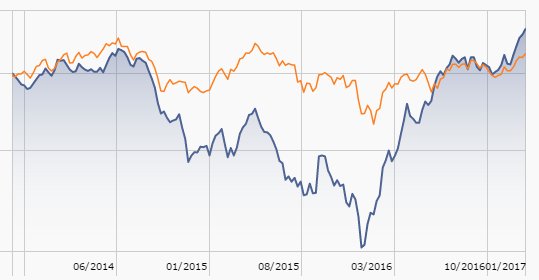 Okay, admittedly the blue line ends up higher than the orange (peer) line but the … uhh, “performance hiccup” in between is entirely missing from the standard data report.

Towle Deep Value Fund (TDVFX) has closed to new investors using third-party channels such as Schwab. It’s an awfully admirable decision. They’ve been struggling for years to get attention. They returned 54% last year, despite a contracting pool of opportunities, and got serious attention. Having concluded that there simply aren’t many opportunities and reluctant to hold cash, they’re closing the door to their most popular channel. It seems very principled to me.

Cambiar Unconstrained Equity Fund (CAMAX) has been renamed Cambiar Global Ultra Focus Fund, and the description of the Fund’s principal investment strategies has been revised to better reflect the investment strategies of the Fund. Uhhh … the Fund will typically invest in a portfolio of 20-30 issuers.  Not to disrespect its ULTRA FOCUS focus, the fund database at MFO Premium lists 150 U.S. equity funds and 35 global equity funds with 30 or fewer holdings.

CBRE Clarion Long/Short Fund (CLSVX) is, subject to shareholder approval, being adopted by the Voya Funds, at which point it will be renamed Voya CBRE Long/Short Fund. Expect to see the change in May.

CMG Global Equity Fund (GEFAX) is becoming CMG Mauldin Solutions Core Fund; in the process it will switch advisers and drop the emphasis on controlling volatility from its investment objectives. Given that the fund is minuscule, expensive and vastly lags its peers (up 3% since inception while its peer group is up 23%), the change is warranted.

Highland Opportunistic Credit Fund (HNRAX) is being reorganized as NexPoint Opportunistic Credit Fund. The key is the NexPoint will be an interval fund, which means that you will be permitted to ask for your money back once per quarter. The managers, however, might not honor all requests for sales; that is, you might want to sell $100,000 in fund shares but (1) the next window might not be until April 1 and (2) they might be willing to return just $60,000 on that date with the remained available at the July 1 redemption. The theory says this gives the manager the ability to invest on your behalf in illiquid or thinly-traded shares without fearing that a sudden rush to the exits will crash the fund. To date, the fund’s substantial volatility has not been accompanied by outsized gains.

On April 1, 2017, Innealta Capital Country Rotation Fund (ICCNX) becomes Dynamic International Opportunity Fund. Upside: no one knew what an “Innealta” was to begin with. Downside: the new name just needs to add “strategic” to win the marketing buzzwords trifecta. At the same time, Innealta Capital Sector Rotation Fund (ICSNX) becomes Dynamic U.S. Opportunity Fund. Note to the Innealta folks: you use the same ticker symbol for the “N” class shares of both funds in your SEC filing.

All of the Janus Funds name will change to reflect Janus Henderson as part of the fund’s name.

By this logic, of course, every active mutual fund might crown itself a Multi-Factor fund since every manager accounts for this same constellation of quality, growth and value.

Effective as of February 28, 2017, all 18 SunAmerica Mutual Funds are being rebranded as AIG Funds. Generously, you’d say that three of the 18 have respectable 1, 3, and 5 year records.

Federated Managed Risk Fund (FDRAX) has managed to get liquidated. I’m guessing that neither the $5 million portfolio nor the last 12 months’ worth of performance has helped. FDRAX is the blue line.

Mariner Managed Futures Strategy Portfolio (a one-star fund with no ticker symbol) will liquidate on March 20, 2017.

In February, Hennessy Large Value Fund (HLVFX) will merge into Hennessy Cornerstone Value Fund (HFCVX). Depending on the time frame, the funds’ correlation sits around 0.88 – 0.90 with one fund temporarily inching ahead of the other before falling back.

On January 24, 2017, the Board of Trustees of AIM Investment Funds approved a Plan of Liquidation and Dissolution for Invesco Macro International Equity Fund (VZMAX).The fund turned out to be consistently better at capturing downside than upside, an annoying habit for the few brave souls who bought it. The fund will be liquidated on or about February 27, 2017

Janus International Equity Fund (JAIEX) will liquidate on or about March 30, 2017. The fund did okay under a series of journeymen from 2006-2010, but the team in place since 2010 has steered it to consistently sub-par returns. Given the recent merger with Henderson Global, it was likely an opportune moment to cut ties.

Palmer Square Long/Short Credit Fund (PCHAX) will be liquidated on or about February 15, 2017.

RidgeWorth Aggressive Growth Allocation Strategy (SLAAX) will liquidate on March 17, 2017. It’s a harmless fund-of-Ridgeworth-funds with no assets and no real distinction.

Turner Medical Sciences Long/Short Fund (TMSFX) and Turner SMID Cap Growth Opportunities Fund (TMCGX) have disappeared. The official text explaining the change is intriguing: the funds “did not receive the favorable vote of a majority of the outstanding voting securities of each Fund for its new investment advisory agreement and therefore each Fund will begin the complete liquidation of its assets.” Curious. Five Turner funds asked for approval of a new investment advisory agreement which, from the investors’ perspective, offered them a bit of financial gain. After failing to secure a quora at several attempted shareholders meetings, Turner pulled the plug. The weird thing is that they did get enough votes for three of five funds, all of which were offered the exact same agreement.

Virtus Emerging Markets Equity Income Fund (VEIAX) and Virtus Essential Resources Fund (VERAX) are closing to new investors on March 3, 2017 and will liquidate on March 15. The former was a good idea that never played out, the latter was weak even by the standards of a beaten-down peer group.