Third Avenue Management, Marty Whitman and former president David Barse have agreed to a $14.25 million cash settlement of a lawsuit brought on behalf of investors in Third Avenue Focused Credit. The fund, if you recall, made headlines first through huge losses in the completely illiquid positions that dominated the portfolio, then by moving all of its assets into a locked trust which kept investors from reclaiming their money. The plan was to liquidate the illiquid when “rational” prices prevailed; after about 18 months, that process is still not complete. The whole mess has cost Third Avenue over $3 billion in assets and threatened its survival. (Reuters)

Naturally, none of the parties involved admit to having done anything wrong. The payment is just to … ummm, eliminate distractions or help us focus on the future or some such.

Steven C. Vannelli, whose Gavekal KL Allocation Fund we profiled back in 2014 when it was named the GaveKal Knowledge Leaders Fund (GAVAX/GAVIX), has purchased a majority stake in his firm which allows it be become independent of their long-time partners at GaveKal Research (Hong Kong). In consequence, he’s dropping the GaveKal part of the name. The firm is now Knowledge Leaders Capital and they’re in the process of removing the GaveKal name from both their mutual fund and their ETF. Morningstar has changed the fund’s peer group three times in six years (from world stock to large growth to aggressive allocation), which makes assessments of relative performance a bit iffy. It had a weak 2016 against its Lipper flexible portfolio peers but has historically produced substantially better returns for substantially less risk than they. 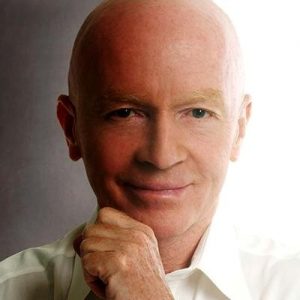 Mark Mobius is finally stepping back. Franklin Templeton has announced that Mr. Mobius, now 80 years old, is stepping away from management of 12 strategies including four funds available to U.S. investors. He’s stepping aside from his flagship Developing Market Trust (TEDMX), which he and Tom Wu began managing in 1991. In all that time, TEDMX had only one other person on the management team, Allan Lam (1991-2004, 2011 – present). For now, he remains co-manager, with Mr. Wu, of Templeton Frontier Markets Fund (TFMAX). It’s curious that he’s been retained only on the weakest of all his funds.

This is part of a larger set of management changes at Franklin-Templeton, which are substantial enough for Morningstar to lower their assessment of the firm from “Positive” to “Neutral.” The complex has seen huge outflows over the past three years; in response, they cut 300 staff worldwide and began reorganizing their investment management structures. A year ago, they rolled Mr. Mobius’s EM Group into another unit and moved the Chief Investment Officer title to Stephen Dover, who then became responsible for combined operations.

Mr. Mobius, meanwhile, has been relegated to a series of what seem to be largely symbolic roles. Citywire reports that he’ll be “sharing ideas and engaging with clients and media to share his insights” (“Mobius drops 12 funds as ‘next gen’ of PMs step up,” 03/21/2017).

Fidelity Inflation-Protected Bond Fund (FPINX) closed to new investors on March 31, 2017. Over the last three years, the fund has operated with a perfect correlation (100) to its sibling Fidelity Inflation-Protected Bond Index (FSIQX). The so-called “active” fund charges 0.25% more than the index and, not surprisingly, returns about 0.25% less. One might reasonably imagine a liquidation in its future.

Effective April 30, 2017, FMI International Fund (FMIJX) will be closed to new investors. When we profiled the fund in 2012, we suggested “all the evidence available suggests that FMI International is a star in the making.” Four years and $4.5 billion later, Morningstar initiated coverage with a “Silver” rating and the observation that the fund offered “a superb record with strong downside protection.”

Effective March 1, 2017, the Principal Global Opportunities Equity Hedged Fund (PGOHX) closed to new investors. Ummm … $7 million in AUM, trails 96% of its peers over the past year. I suspect it won’t stay closed for long.

On March 31, 2017, the adviser to the Meridian Funds, Arrowpoint Asset Management, changed its name to “ArrowMark Colorado Holdings, LLC, d/b/a ArrowMark Partners.” No idea of why and no evidence of other changes underway.

The Berwyn Funds (Berwyn, Cornerstone and Income) will pass into history at the end of June, 2017, to be reborn as the Chartwell Funds. Each Chartwell Fund will have the same investment objective and principal investment strategy as the corresponding Berwyn Fund, except that Berwyn Cornerstone Fund (BERCX) will become Chartwell Mid Cap Value Fund with “similar, but not identical, investment objectives, as well as different investment strategies and risks.” There are, as yet, no details on those differences. The star of this show is clearly the $1.7 billion Berwyn Income (BERIX), so the continuity there is wise and reassuring.

On May 1, 2017 Brown Advisory Emerging Markets Small-Cap Fund (BIANX) is rechristened as Brown Advisory – Macquarie Asia New Stars Fund, at which point it will focus its portfolio on small and medium cap companies in Asia (excluding Japan.

Century Capital Management, advisor to Century Shares Trust (CENSX) and Century Small Cap Select Fund (CSMVX), has agreed to be acquired by Congress Asset Management in the second half of 2017. Expect the fund names to change but the fund manager, Alexander Thorndike, to remain the same under the new regime. We’ll share details when we can.

On March 28, 2017, MassMutual Select Mid Cap Growth Equity II Fund was changed to the MassMutual Select Mid Cap Growth Fund (MEFZX).  They assure us that “The investment objective, investment strategies, management, and all other aspects of the Fund remain unchanged.” Hmmm … it’s a five-star fund with low expenses that has outperformed 90% of its peers over time, so that “remain unchanged” part is okay with us, I guess. (I know MassMutual was just waiting for that approval.)

As on March 28, 2017, MassMutual Select Focused Value Fund became MassMutual Select Equity Opportunities Fund (MFVAX); Harris Associates (a/k/a Oakmark) was excused from managing the fund and T. Rowe Price and Wellington took the reins. It’s been high beta (1.3 or so) with negative alpha, so the move seems sensible on face.

Effective May 8, 2017, the other 35 Virtus Funds will change their names to highlight the funds’ subadvisers. For example

The AdvisorOne CLS Global Growth Fund (CLBLX) has closed and will “discontinue its operations” on April 28, 2017.

AlphaCentric/IMFC Managed Futures Strategy Fund (IMXAX) liquidated on March 30, 2017. In 16 months of operation, the fund booked a loss of 26% for its investors and trailed virtually all of its peers in a troubled category.

AMG Managers Cadence Capital Appreciation Fund (MPAFX) is merging into AMG Renaissance Large Cap Growth Fund (MRLTX), subject to the approval of shareholders, on or about July 31, 2017. The Renaissance fund is smaller, younger and better-performing.

At the end of December, 2016, Balter Event-Driven Fund (BEVRX/BEVIX) “indefinitely suspended all sales of fund shares.” On March 6, 2017, they issued a supplement to their prospectus to reiterate that fact. The fund converted from a hedge fund at the start of 2016, trailed 80% of its peers over the course of 2016, raised no assets and suspended sales at the end of 2016. On March 28, they announced their decision to liquidate the fund on April 28, 2017.

Bishop Street Strategic Growth Fund (BSRIX) is expected to cease operations and liquidate on or about April 7, 2017.

BlackRock Advantage International Fund (BDNAX) has closed and, by May 5, 2017, “assets of the Fund will have been liquidated completely.”

BMO’s board announced that BMO Mortgage Income Fund (BMTAX) has been renamed BMO Strategic Income and its investment strategy has changed to become identical to the strategy at BMO TCH Intermediate Income Fund (BAAIX); that is, from “provide current income” to “maximize total return consistent with current income.” Then, once it had become a clone of BAAIX, it would absorb that fund into itself. So, Mortgage Income + Intermediate Income = Strategic Income.

On January 18, 2017, the Board of Trustees approved a plan of liquidation for Fidelity Municipal Income 2017 Fund (FAVIX). The fund is expected to liquidate on or about June 30, 2017.

Franklin Global Government Bond Fund (FGGAX) will terminate and liquidate the fund on or about June 16, 2017. Something seems to have gone just a bit awry for them in early November:

The $13 million Geneva Advisors Emerging Markets Fund (GNLRX) will be closed and liquidated as of the close of business on April 28, 2017.

Effective immediately, Hatteras Long/Short Equity Fund (HLSAX), Long/Short Debt Fund (HFIAX) and Managed Futures Strategies (HMFIX) funds have closed and will“ return each Fund’s investor capital” on April 26,2017. Between them, the three funds have $48 million in investor capital (and a total of five Morningstar stars) to distribute.

IronBridge Global Fund (IBGFX) will be liquidated on or around March 31, 2017.

Janus Capital recommended, and the Board approved, a proposal to merge Janus Fund (JANSX) into Janus Research Fund (JAMRX) as a way “to streamline its large cap offerings in order to better position these offerings within the marketplace.” The firm launched Janus Fund in February 1970 under the leadership of Thomas Bailey, who guided it for 16 years. James Craig followed for 13, Blaine Rollins for six, then a bunch of people for three or four years each. Janus Fund’s current managers will not have a role in managing the merged fund.

John Hancock Global Real Estate Fund (JHGRX) will close at the end of April and will liquidate on or about May 25, 2017.

Effective March 17, 2017, Lyons Small Cap Fund (LFSAX) closed to new investors; it liquidated two weeks later. I like the turn of phrase they used: “the Board of Trustees has determined to close the Fund and wind up its affairs.” The fund has been in operation for 16 months.

MN Rainier Intermediate Fixed Income Fund (RIMFX) will liquidate at the close of business on May 1, 2017.

Neuberger Berman Long Short Multi-Manager Fund (NLMIX) will liquidate on or about April 20, 2017.

I really respect folks who choose to speak clearly, even in bad times: “The Royce Fund’s Board of Trustees approved a plan of liquidation for Royce International Small-Cap Fund (RISNX), to be effective on May 1, 2017. The Fund is being liquidated primarily because it has not attracted and maintained assets at a sufficient level for it to be viable.”

Schooner Hedged Alternative Income Fund (SHAAX) sailed off into the sunset on March 31, 2017. It never quite played the normal “market neutral” game: 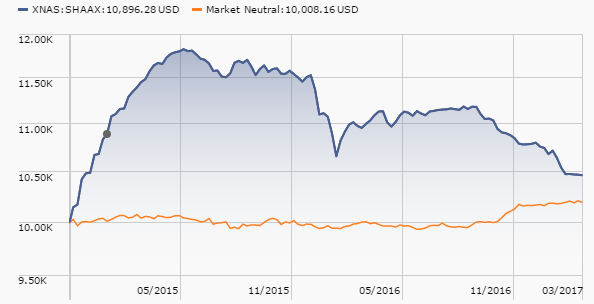 USA Mutuals/Carbon Beach Deep Value Fund (DEEPX) liquidated at the close of business on March 30, 2017. The fund was launched four months ago and not marketed, so most of its assets were held by insiders. No word on why the firm decided to reverse course so quickly.

On or about May 10, 2017, Virtus Strategic Income Fund (VASBX) and Virtus Emerging Markets Debt Fund (VEDAX) will terminate, liquidate and evaporate.