PIMCO fee roulette. PIMCO is changing the advisory fees on a bunch of their funds, some up, some down, and some both. Here’s the snapshot:

PIMCO All Asset All Authority Fund (PAUAX) up 0.05% for D shares

PIMCO Unconstrained Bond Fund (PUBAX), down 0.11% for all asset classes.

I assume that net expenses will follow the advisory fee changes, since nothing in the filings said otherwise.

Holland Capital Management is closing its doors. The firm, one of the industry’s few African American-owned and female-owned advisers, is winding down its affairs over the next six weeks. Holland Capital bears the name of Lou Holland, who co-founded the firm with Monica Walker in 1971 and led it until 2008. He retired after receiving an Alzheimer’s diagnosis, and succumbed to effects of the disease in March, 2016. Readers of a certain age will remember Mr. Holland for the two decades he spent as a regular on Louis Rukeyser’s Wall $treet Week. He was a quiet, plain-spoken, very smart guy.

The firm still manages $2.5 billion in assets, with just $95 million left in their flagship mutual fund, now called American Beacon Holland Large Cap Growth Fund (LHGFX), though its ticker reminds you that it was Lou Holland’s Growth Fund. In the years following Mr. Holland’s retirement, the fund continued to post entirely respectable returns, more than respectable if you take its risk-sensitivity into account.

My impression is that the fund simply saw the writing on the wall; small boutique managers are at a serious and worsening disadvantage when it comes to marketing their services. The unending bull market, which has convinced many institutional investment committees that “risk” is a largely outdated and overblown concern, compounds that challenge.

The advisers for Alambic Small Growth Plus Fund (ALGSX) have lowered the fund’s capped expense ratio from 1.20% to 0.95%. Alambic is a tiny, new microcap fund with really solid returns; it’s up about 30% since launch while its small-growth peers are up about 23%. I mention them not just because they’ve reduced their fees by a quarter, but also to highlight the cost that the managers of such funds bear. At its current size, Alambic costs nearly 9% per year to run. The managers charge one-tenth of that amount and write checks out of their own accounts to cover the rest.

Ariel Investments might be thinking about maybe beginning to roll back the fees it charges its investors, somewhat. According to a report at Bloomberg, founder John Rogers, is acceding to demands from his board to lower fees. He evinces no enthusiasm for the prospect and discussed neither magnitude nor timing.

Effective September 1, 2017, Causeway Capital Management lowered the management fee for Causeway Global Absolute Return (CGAVX) from 1.50% to 1.10%. The fund’s goal is “long-term growth of capital with low or no correlation to the MSCI World Index,” and Morningstar categorizes it as a market neutral fund. The fund has not achieved its first objective; over the past five years it has lost 0.39% annually, per Morningstar, 8/30/17) while its peer group has gained a largely-irrelevant 0.79%. 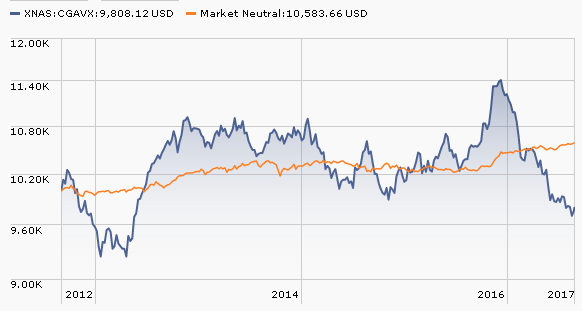 It has overachieved on the second objective. The fund actually sports a negative three- and five-year correlation with the ACI exUS global index. I’m not sure that a lower management fee will address the fund’s central challenge, but it’s certainly a good faith gesture.

Toreador International Fund (TMRFX) has converted its “C” class shares into “Investor” shares. “C” shares are a relic of the days when the primary challenge to funds with front-end sales loads was the rising tide of no-load mutual funds. In an attempt to have their cake and eat it too, fund companies began offering “C” shares which had no sales load but carried exorbitant expense ratios. I’m glad to see them go.

Wells Fargo Emerging Growth Fund (WEMAX) reopened to new investors in mid-August. Our database shows 127 small-growth funds that have been around for the entire market cycle; of those, Wells notched the 100th highest Sharpe ratio. I’d probably look at the 99 higher-rated funds first.

Effective September 29, 2017, the Nationwide Small Company Growth Fund (NWSAX) will close to new investors. The fund carries a five-star rating but has only $217 million in assets.

Effective at the close of business, Friday, September 29, 2017, T. Rowe Price Global Technology Fund (PRGTX) will be closed to new investors and new accounts. Ummm … $5.3 billion in assets, top 1% returns over the past 3-, 5- and 10-year periods. It’s an MFO “Great Owl” fund, which means it has outperformed the vast majority of its peers in every trailing measurement period back to 2000. To be clear: it’s outperformed in rising markets, in falling markets, and across the entire market cycle.

Effective at the close of business on September 29, 2017, the TIAA-CREF Small-Cap Equity Fund (TCSEX) will close to new investors. It’s a fine fund (0.70% expenses, $2,500 minimum, stable management, good downside record), but there’s no real case for rushing in to it. Traditionally it has run a little ahead of its pack then, after four years ago, the lead began to widen. Much of its current three- and five-year performance advantage seem attributable to Q4/2016, when it rose by about 10% and its peers rose 3%.

In one of the year’s oddest transformations, on September 15, 2017, Cavalier Dividend Income Fund (CDVDX) will become (wait for it!) the Nebraska Fund.

Morningstar, in one of a series of increasingly troubling glitches, apparently changed the fund’s name and ticker weeks before the change legally occurred, immediately and substituted a new name and ticker symbol, NEBIX. Any attempt to search “Cavalier Dividend Income” at Morningstar leads you to the warning, “The request could not be satisfied. Bad request.” (Indeed. Bad request. Bad, bad request!) If you Google the name, you can find the fund’s ticker. Enter the symbol in Morningstar’s search and you go to “page isn’t working” before it resolves to the Nebraska Fund.

And the Nebraska Fund? It will “invest primarily in common stocks of publicly-traded companies that either are domiciled in Nebraska or that have a significant local interest in Nebraska.”

Why? Oh, why not? It’s a fund with under $2 million in assets that’s recently appointed its 10th manager in five years. We wish them good luck finding a successful niche.

Shareholders of Cozad Small Cap Value Fund (COZAD) has been asked to approve reorganization of their fund into Oberweis Small-Cap Value Fund, likely during the fourth quarter of this year. The fund started life, in 2010, as a hedge fund and, in 2014, before a load-bearing mutual fund. This transaction, if approved, will turn it into a no-load mutual fund.

Around November 1, 2017, the Hartford Value Opportunities Fund (HVOAX) will be reborn as Hartford Quality Value Fund. In the process it will acquire a new name, new mandate and new management team; shareholders will acquire a new tax bill as the managers liquidate the old portfolio and build the new.

On or about October 27, 2017, UBS U.S. Large Cap Equity Fund (BNEQX) switches to UBS U.S. Sustainable Equity Fund because the advisor “believes the new strategy will provide the Fund with a stronger market appeal than the Fund’s current strategy, differentiate the Fund from other passive and generic active large cap core products, and will be beneficial for current shareholders and future clients.”

Cavanal Hill Multi Cap Equity Income Fund (APEQX) will liquidate on October 10, 2017. For reasons unclear to me, the board also voted to change its tax year end date from August 31 to July 31.

The Guggenheim Large Cap Optimized Diversification ETF (OPD) is teetering at the threshold between “irrelevant fund” and “former fund” (technically, it’s in “a liminal state”). The NYSE has notified the Trust that they’re in violation of Rule 5.5(g)(2)(a)(1) of NYSE Arca Equities, Inc. At base, fewer than 50 people are invested in the fund and they’re scrambling to outline a plan which will increase the number of shareholders. Ummm … you have a million in assets, virtually no shareholders and poor performance. I’d declare victory and shut off the lights.

On August 2, 2017, the Board of approved a Plan of Liquidation for the Hartford Schroders Income Builder Fund (SARVX), effective October 20, 2017.

Effective as of August 25, 2017, the Hays Tactical Multi-Asset Fund (HAZNX) closed, in anticipation of being liquidated on September 29, 2017.

The Health and Fitness ETF (FITS), a Janus fund, launched in June 2016, was a dumb idea, accumulated under $3 million in assets, accomplished little and will liquidate on October 2, 2017. The Obesity ETF (SLIM), launched the same day, was a dumb idea, has accumulated under $3 million in assets, and has returned10% since inception while its health care peers have returned 19%. The star of the show is The Organics ETF (ORG) which has ballooned to $9 million in assets and is modestly outperforming its benchmark. All three appear on the latest ETF Deathwatch.

JPMORGAN Ohio Municipal Bond Fund (ONOHX) will liquidate on December 8, 2017. Yes, I know, not even people in the Buckeye State really care.

Of greater import, JPMorgan is shutting down five of their international funds. JPMorgan International Opportunities Fund (JIOAX) and JPMorgan Latin America Fund (JLTAX) go first, on October 13, 2017 then JPMorgan China Region Fund (JCHAX), JPMorgan Emerging Markets Equity Income Fund (JEMEX) and the JPMorgan International Discovery Fund (DSCAX) follow a week later. International Opportunities is inexplicable, at least at first glance. The fund has $3 billion in assets and a decent track record. Advisors are rarely willing to let that much money go out the door, but the SEC filing gives no explanation.

The Marketocracy Funds has decided to shut down (technically “liquidate, dissolve and terminate the legal existence of”) The Marketocracy Masters 100 Fund (MOFQX). We’ve written about the fund in the past, an interesting but unsuccessful attempt to build a crowd-sourced portfolio by investing in the stocks that occur in the best 100 investor fantasy portfolios. The LDT will occur in mid-September.

The Osterweis Institutional Equity Fund (OSTEX) “has been operating at a low asset size for some time. Given recent redemptions, Osterweis Capital Management … has recommended, and the Board of Trustees has approved, the liquidation and termination of the Fund on September 7, 2017.” The fund ends its run with well under $1 million in assets.

They purchased and owned what was at one time the Babson Funds which later became the Tamarack Funds. I had both the Babson Enterprise (TETSX) and the Babson Shadow Stock Fund later known as the Microcap Value Fund (TMVSX). Lance James was the manager of the Enterprise Fund.

As part of an old and oft-repeated tale, Turner Midcap Growth Fund (TMGFX), Turner Small Cap Growth Fund (TSCEX) and Turner Titan Long/Short Fund (TSPCX) have all closed and will all liquidate on September 8, 2017. Turner issues one distinctive warning about the liquidations: “Each Fund may distribute a portion of its assets in cash pro rata to shareholders to avoid being subject to federal income or excise taxes.”

Wells Fargo Global Long-Short Fund (WGLAX) has closed and will liquidate on October 27, 2017. The fund was a little more volatile than its peers with about the same returns. Few investors seemed compelled by the combination.