On December 30, 2016, Polen Capital Management launched Polen International Growth Fund (POIIX). The fund is an international extension of the high-conviction strategy behind Polen Growth (POLRX/POLIX) and Polen Global Growth (PGIRX/PGIIX). Polen has over $9 billion in assets under management and is located in Boca Raton, Florida, “far away from the short-term pressures of Wall Street.”

The fund will typically invest in 25 to 35 large cap international stocks, including those domiciled in both developed and developing markets. It might, from time to time, dabble in a few mid-cap names. The manager will focus on firms that have a sustainable competitive advantage which can deliver sustainable, above-average earnings growth in industries where there are high barriers to entry. Their research attempts to identity firms which:

They have a five-year investment horizon, which has translated to single-digit portfolio turnover rates at their other two funds.

There are a couple reasons that investors seeking international growth exposure might want to take this new fund seriously.

Polen Growth, whose discipline it follows, has been remarkably successful. Morningstar rates the fund as four-star overall and five-star over the past three years; Morningstar’s analysts have awarded it a Bronze designation and have named it a Morningstar Prospect.

Polen Global Growth, which we hope to profile in the month’s ahead, is off to a similarly impressive start.

Polen thinks interesting thoughts. Their “10,000 portfolios” paper, which we link to below, is way cool. It started with an investor’s question, “how do you know you’ve put together the best portfolio you could?” Their CIO was intrigued and commissioned FactSet to run an experiment on their behalf. Polen has been running a growth portfolio since 1989; the outline is always the same: about 20 large cap US stocks, more or less equally weighted, held for about five years. They have FactSet construct 10,000 portfolios of randomly-selected US large cap stocks, each of which turned over once every five years.

Here’s a picture of the results: 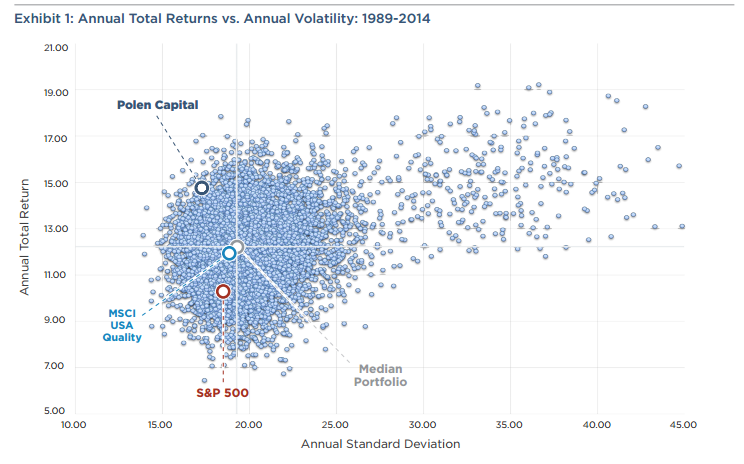 The further north-west (high returns, low vol) you go, the better. Very few potential portfolios were further north-west then Polen, while the S&P500 was distinctly south and east. That led to a nice discussion, under “What We Learned,” about the effects of concentration, quality and conviction. Their reflections then dovetailed nicely with the most recent research on active share, which concludes that concentration and conviction far trumps expenses as a predictor of investment success.

The fund’s website is Polen Capital. You might, in particular, spend a moment with their white paper “Could We Have Done Better? The 10,000 Portfolios Project” (2016), which struck me as both well-written and unusually thoughtful.