I like gardening rather more than I like investing. I garden because it’s joyful, healthy and engaging. Most recently, I planted my first potato patch with four artisanal varieties of tubers, one each of russet, gold, red and blue. That meant adding a considerable quantity of organics and a bit of sand to a 4×4 south-facing patch that had been mostly weeds. You’re also supposed to “hill up” potatoes as they grow but I couldn’t, for the life of me, figure out quite what that meant in the context of an open patch of earth. Instead, I collected grass clippings (a safe practice since I don’t chem my lawn) and kept everything but the leaves buried.  I’m stunned and delighted to report that it actually worked. I dug around in October and there was, like, food in the ground! 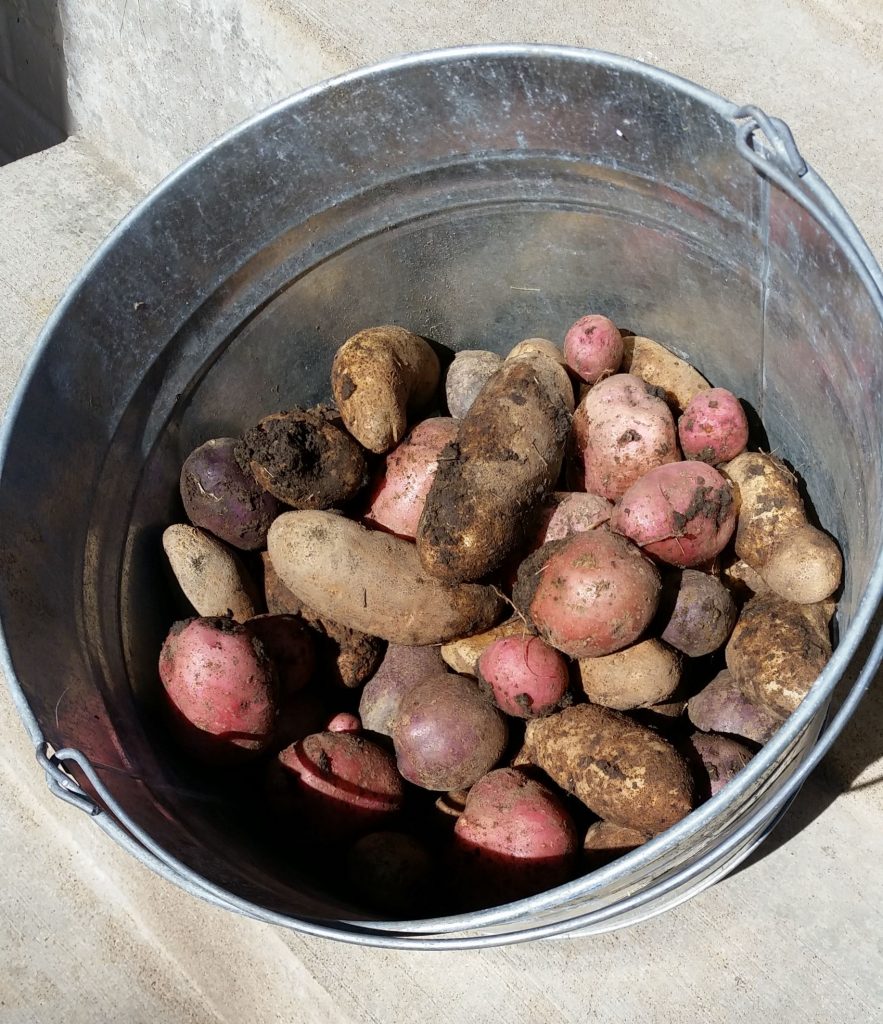 That led to a spate of roasted root veggie meals, since I’d also planted onions, carrots and herbs. The results were delicious and edible even by the standards of my 16-year-old son.

The upcoming challenge is to figure out whether and, if so, where to plant potatoes this year. Any particular plot of ground should be used for potatoes only one year in three, otherwise you risk crop failure from soil-borne pathogens. Complicating the problem is that fact that tomatoes are in the same family as potatoes (who knew?), which means they can’t be one of the fill-in crops. This will take some planning.

Which is where my portfolio comes in. I count on my portfolio to make potatoes possible. It has two roles to play in my potato patch. First, it needs to give me the confidence to focus on the things I care about: family, friends, gardens, books, students, my community, and you folks. That confidence comes from the fact that I know that I have the resources to deal with…. well, stuff. Because stuff happens. And, sadly, most of our fellow citizens can’t have the confidence that they can deal with it.   About two-thirds of Americans report that they would struggle to quickly come up with $1,000 to address some small but imminent crisis. That leads to an awful lot of anxiety and anxiety feeds bad decision-making. 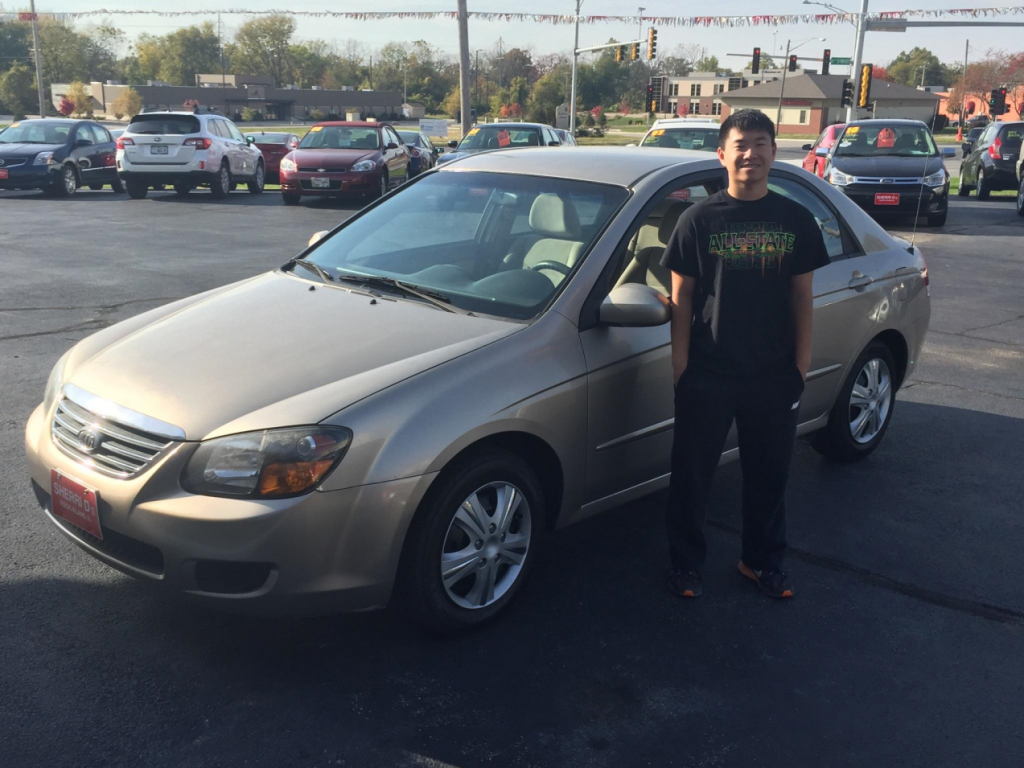 In 2016, “stuff” came in the form of my son’s request for a car. Will turned 16, has a wonderful girlfriend and the ambition to get a job while taking community college classes through his high school. A car seemed like a perfectly reasonable request. I hate the idea of more debt or car payments so, after finding a clean ’09 Kia Spectra, I sold down portions of three mutual funds and simply wrote a check for it. Two weeks later the transmission failed and a second check followed (we split the cost 50/50 with the dealer.)

Thanks go to Steve Romick, David Sherman and the team at T. Rowe Price for helping to make that possible.

In the longer-term, my portfolio is also part of the plan which will allow me to step back one day from full-time teaching and to explore other passions.

Remember, I said that my portfolio contributed in two ways to my potato patch. Its second contribution is made by not distracting me. The last thing I need is a portfolio that requires – or demands – constant attention. I don’t like trading and don’t want the temptation to trade; I will never buy an ETF and will never again buy an individual stock. I don’t want to try to outguess the new administration’s effects or respond to the next crisis. I want a portfolio that will benefit from benign neglect. That’s reflected in the fact that I liquidate a fund position about once every seven years.

Those two imperatives led me, long ago, to four steps:

My retirement account targets 70% growth / 30% income. By my best calculation, making 6% annually – through a combination of capital appreciation, income and monthly contributions – will achieve my goal.  Those numbers are not simply made up. Several retirement providers have retirement planning calculators. In my case, I used tools offered by T. Rowe Price, Fidelity and TIAA-CREF. Of those, Price, which does a Monte Carlo simulation, struck me as the most useful and reliable but all of them had me in about the same range.

My non-retirement account starts with a simple asset allocation:

One thing to remember is that I do not have a large savings balance and never have. My non-retirement portfolio, then, is positioned to function as both my savings and emergency account. With a low equity exposure and experienced managers, it offers the opportunity for capital growth, limited downside and far higher returns than the 0.1% inflicted on savers by central bank policies. No, it’s not guaranteed. I know that. But the maximum projected downside for this allocation is small enough that, even in crisis, I’ll have the resources to meet any plausible challenge.

Here’s the execution of it.

My retirement portfolio is largely hostage to Augustana College. I helped lead a dramatic program redesign several years ago, which greatly simplified the system, limited investment options and created an employer match rather than a simple employer contribution. It worked really well to boost savings college-wide but it cost me access to Fidelity and T. Rowe Price. Those two pots of retirement money are now sort of locked away, I can’t add to them and, as a practical matter, I can’t move money between them. Our “live” options are mostly TIAA-CREF annuities and funds.

My TIAA-CREF holdings are about 60% CREF Stock, 20% TIAA Real Estate and 20% Lifecycle Index 2025. Morningstar rates Stock as a below-average domestic large-cap annuity, which isn’t surprising since Stock is 30% international. Real Estate is unique because it actually owns real estate and participates in real estate partnerships, rather than passively investing in REITs or REOCs. It tanked in 2008 when the real estate bubble burst, but has otherwise generated a steady 8% annually. My personal rate of return last year was 7.3%. I don’t anticipate any changes here.

My largest of my 10 Fidelity holdings are Low-Priced Stock (FLPSX), Growth Discovery (FDSVX) and Global Balanced (FGBLX). I’ve never made money betting against Mr. Tillinghast at Low-Priced, Mr. Wiener just finished his 10th year at Growth Discovery and has top quartile returns over the period, Global Balanced is a good idea that’s been struggling for several years. I may well shuffle that allocation toward Total Emerging Markets (FTEMX), in which I already have a smaller holding.

On the T. Rowe side, my largest (of nine) holdings are Blue Chip Growth (TRBCX), Spectrum Income (RPSIX) and Mid-Cap Growth (RPMGX). Blue Chip had a sucky year (under 1%), Spectrum Income had a great one (over 8%) and Mid-Cap Growth rolled along (6.5%). My best short-term performers here were value-oriented funds, the worst had high international stakes. No surprises. The biggest question here, which Charles might answer next month, is whether to simplify all of this into a target-date 2025 fund. The key is that I can no longer add to the account so perhaps auto-pilot now makes sense. I’ll ponder.

My non-retirement portfolio is comprised of actively-managed funds whose managers have earned my trust. Since I do not trade my funds, I try to find vehicles where the managers have some flexibility to bob-and-weave on my behalf.

Here’s the current roster, ranked from my largest position to my smallest.

My portfolio normally changes at a glacial pace. By historic standards, 2016 saw a blizzard of change. In particular:

I eliminated three funds from my portfolio.

Artisan Small Cap Value was liquidated by Artisan and I moved the procedures to Intrepid.

Northern Global Tactical Asset Allocation and ASTON/River Road Long Short are both exemplary funds, and we’ll soon refresh our Northern profile. That said, both of the accounts were too small to contribute much to my portfolio, so I sold them without prejudice and added the procedures to Intrepid. That made Intrepid my second-largest holding behind Crescent.

I sold shares in three funds.

Crescent, T. Rowe Price Spectrum Income and RiverPark Short-Term High Yield contributed about equally to the purchase of my son’s car. (Thanks!) And to the subsequent rebuilt transmission. (Nuts. It happens.)

And I continued funding most, but not all, of them.

What does the future hold?

Stuff, mostly, but I have no firm idea of what sort of stuff.

On the investment front, we know that stocks are at the high end of their historic valuations and that they’ve been on a speculative tear since the election. It’s not clear whether the classic sign of investor frenzy is present, nor is it clear than investor frenzy is any longer needed prior to a collapse.

Commentators are torn about the degree to which we should worry. Most sensible (in my reading) people say that it’s not time to increase your risk profile, though the market is singing a siren song. Some commentators try to justify the market’s valuations with silly arguments (“if fossil fuel companies weren’t so depressed, valuations market wide would look pretty normal?) and others make intriguing ones (one analyst suggests that investors are now reconciled to permanently low returns, which are manageable even at current valuations).

I simply don’t know and don’t intend to twist my life in knots fretting about the question. After all, the garden beckons.