If so, you’re not alone.

There are hundreds of funds which Morningstar once covered that they can no longer afford to follow.  Morningstar started as seven guys working out of Joe Mansueto’s apartment. They’re now a publicly-traded global corporation with 3900 employees and $130 billion in assets under management (or advisement). More importantly, they’re a corporation with $600 million in annual expenses.

If you’ve got $600 million in bills, you really need more than $600 million in income and you don’t get that by worrying about small funds that aren’t on most advisors’ radar, especially when the entire universe of active funds is contracting.  Morningstar explains the rules this way, “We’re committed to covering those investments that are most relevant to investors and that hold a significant portion of industry assets.” In this case, “relevant” is pretty much the same as “pretty large.”

As an empirical matter, if your fund has under a billion in assets, you have one chance in 30 of getting coverage. That is, excluding life-cycle or target-date funds, 195 of 5700 (3.4%) of funds under $1 billion have coverage.

In addition to the relatively few smaller funds with current coverage, there are hundreds of others which once received coverage but do not now. Sometimes that’s because they suck and deserve to wither in the shadows. But sometimes it’s a simple resource decision where very promising funds are consigned to the shadows. Morningstar again,  “Investments with suspended coverage or that have never been covered are often those that are both smaller in size and are less widely held.”

Excluding muni bond funds, which sometimes live in a category with only two competitors, there are 599 distinct funds that meet those criteria. Of those, fewer than 40% (237 of 599) have analyst coverage. As we searched the Morningstar database we found many more in that elite coverage that once had coverage but haven’t been covered in five or more years.

I wish I could be more precise, but sometime after we first mentioned this phenomenon last month, Morningstar tidied up their search results so that analyst reports older than 24 months no longer appear in the search list.  You might reasonably think that the funds with “–” might never have received coverage. 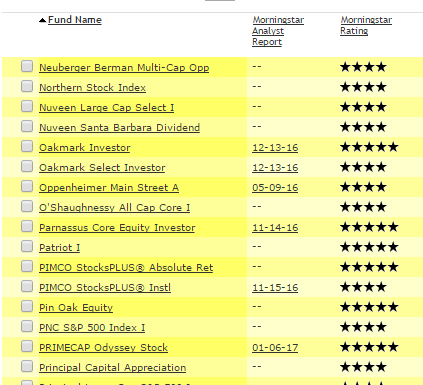 In reality, on this list, Northern Stock Index and Pink Oak Equity were both the subject of multiple reports before being dropped in 2009.

Charles has posted a list of more than 70 excellent domestic and international equity funds that have lost coverage at our MFO Premium site. Premium members can find them by clicking on the pre-set screen, “Morningstar’s forgotten funds” in the multi-search screener. We’ll add allocation funds when time and workloads permit.

Each month we’ll profile one of the funds that once interested Morningstar and which, though small, still interests us. We started the effort last month with our profile of T. Rowe Price Global Multi-Sector Bond (originally named T. Rowe Price Strategic Income, PRSNX). The analyst in 2009 wondered if Mr. Huber could sustain his success. He could.

This month’s focus is Pin Oak Equity (POGSX), a $200 million fund that’s both highly disciplined and consistently excellent. The analyst in 2009 asked if he could manage risks well enough to maintain consistently high returns; the manager thinks so and the record is very strong.

In the months ahead we’ll try to bring one fund each issue back into the light. If you manage a fund that’s lost analyst coverage but think you since have a story to tell, let us know. We’ll do our best.