The industry appears to be in full summer-beach mode, or its doing so splendidly that there’s no need to even think about changing anything. In any case, July saw the smallest number of announced changes in about five years.

Our July 2017 profile of Matthews Asia Credit Opportunities (MCRDX/MICPX) described it as investing in high-yield bonds. That’s correct but incomplete. Manager Satya Patel reminded us that the fund’s core investments can include “convertibles, hybrids and derivatives with fixed income characteristics.” Indeed, since inception convertible bonds have represented 20-25% of the portfolio. We’ve corrected the profile to reflect that. The fund has built a substantial performance advantage over its peers since inception, similar to the consistent success of its older sibling, Mathews Asia Strategic Income (MAINX). 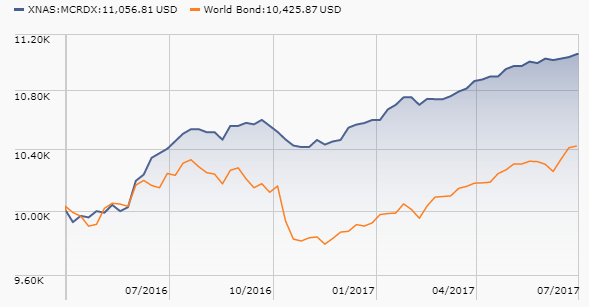 Effective August 1, 2017, Fidelity will reduce total expenses across 14 of its 20 stock and bond index mutual funds. The average e.r. will be reduced from 11 bps to 9.9 bps.

Effective September 1, 2017, the minimum initial investment amount for individual investors in Class I shares of the Marketfield Fund (MFLDX) is being lowered from $1,000,000 to $25,000. This has long felt like the Icarus Fund, which was too proud, soared too high, got too close to the sun and plummeted. Assets are down about 97% from their peak, but the firm is independent again and their 2017 performance has been quite solid.

PIMCO is liquidating the “C” class shares for many of their funds. That strikes me as an entirely positive move.

Effective the close of business on August 4, 2017, Fidelity Global Balanced (FGBLX) will close to new investors. I’m not sure why. The fund is economically viable (roughly $500 million) but nowhere near reaching a capacity constraint. Its performance has been mostly mediocre, but never embarrassing. It’s a curious decision.

Vanguard Wellington (VWELX) has closed to new investors, except for folks with a Vanguard brokerage account. That’s attendant to their impending launch of global versions of Wellesley Income and Wellington. (See this month’s “Funds in Registration” for details.)

Deutsche Core Fixed Income Fund (SFXAX) will merge into Deutsche Core Plus Income Fund (SZIAX), on or about October 30, 2017. It’s scary when even the surviving fund, in this case one that’s trailed 98% of its peers over the past decade, looks like a candidate for closure.

Pioneer Emerging Markets Fund (PEMFX) will merge into Pioneer Global Equity Fund (GLOSX) “in the fourth quarter of 2017.” Approximately 3% of Global Equity’s portfolio is invested in the emerging markets, making it a pretty poor fit for investors who had been seeking direct EM exposure. Indeed, GLOSX has more money invested in Apple than in all the EMs combined. On the other hand, PEMFX is really bad at what it does while GLOSX is mostly mediocre.