It’s summer time, an especially blessed and cursed interval for those of us who teach. On the one hand, we’re mostly freed from the day-to-day obligation to be in the classroom. Some of us write, some travel, some undertake “such other duties as may from time to time be assigned” by our colleges. On the other hand, we hear the clock ticking. All year long, as we try to face down a stack of 32 variably-literate essays at 11 p.m. Sunday night, we think “if I can just make it to summer, I’ll recharge and it’ll be great!” About the first thing we notice when summer does arrive, is that summer is almost spent.

To The Wall Street Journal: I get it now! I promise never to display another illicit barber pole.

Now will you stop?

Mayhap the editors of the WSJ.com have Calvin Coolidge (one of my predecessors as director of debate at the University of Massachusetts, by the way) tattooed upon their heinies?

Nothing in the world can take the place of persistence. Talent will not; nothing is more common than unsuccessful men with talent. Genius will not; unrewarded genius is almost a proverb. Education will not; the world is full of educated derelicts. Persistence and determination alone are omnipotent. The slogan Press On! has solved and always will solve the problems of the human race.

Calvin Coolidge. The quotation appears on the cover of his 1933 memorial service but archivists can’t find evidence of him actually saying it.

Admittedly that would be an awfully painful experience but there are few better explanations for their incredible persistence in sharing the same damned story with me, three times a week, every week for months. What story? Here’s a snip from my inbox:

That story first ran at the beginning of May. The gist of it is, if you own a hair salon or similar establishment, you can’t simply plunk a red, white and blue striped pole in front of your establishment. Without a licensed barber on staff, you can’t even have a picture of a striped pole in your window. Barbers are ratting-out hairdressers at an incredible rate over these violations.

Got it. The illicit pole has been taken down from the Observer’s world headquarters. (Actually we have neither pole nor headquarters, but I’m getting desperate for some peace, so I’ll play along.) We promise not to reproduce its tri-color likeness in these pages again.

The headline is certainly eye-catching:

If only it were true.

The quotation from Shiller is this: “I would say, have some stocks in your portfolio. It could go up 50 percent from here. That’s what it did around 2000 — after it reached this level, it went up another 50 percent.”

Have some stocks in your portfolio?  That is, don’t abandon the market completely. Does that sound like a guy saying the stock market will rise 50%?  Uhhh … no. That’s a guy saying “I’m not in the business of calling market tops. The market’s expensive but it could still go up before the final blow-off.” In a late June interview, he said, “People should be cautious now. We have a high market. That doesn’t mean I would avoid it altogether.”

You get a better sense of the esteemed economist’s current thought if you simply follow him on Twitter. His current passion is the role of narrative in economics; that is, the stories we tell ourselves – and the stories others suck us with – are far more powerful forces than rational calculus and data. He noted, for example,

Trump’s example and admonition to “think big and live large” (Trump and McIver, 2004) appears to provide inspiration to many of his admirers, and that might well be expected, along with his stimulative tax policy, to boost consumption demand as well as entrepreneurial zeal. Many people might take the Trump story as a script for themselves, and thus spend freely and raise their risk tolerance.

He lays it out in his newest book Phishing for Phools: The Economics of Manipulation and Deception (2016) and his 2017 presidential address to the American Economic Association.

To the Quad City Times: Really, a subscription is a contract.

In our March issue, I warned folks about an apparently widespread scam perpetrated by cash-strapped newspapers. In pursuit of a bit of additional revenue, the papers were turning 52 week subscriptions into 46 week subscriptions after the fact, then looking for an early renewal at a new, higher rate. Chip and I found several newspapers pursuing such “accelerated” terms, and urged you to check your own subscriptions to be safe.

I wrote the editor, publisher and circulation director of the Times, but received no reply. So, I filed a complaint with the Iowa Attorney General’s office.

Three days later, the publisher of the Times called me at home to apologize for the three month delay in responding and to promise that my original expiration date would be restored. She did allow that they’d received a call from the Attorney General’s office but wouldn’t commit to restoring the terms of other subscribers who were in the same position as me. Their reasoning is that a paid subscription isn’t a contract, hence they’re not bound by the dictates of contract law.

Since these agreements are often referred-to as “individual subscription contracts,” this seems like a novel legal position.

To the Wall Street Journal: Thanks!

In an era when much financial journalism is reduced to pandering for clicks and the sort of press release journalism that takes everything they hear at face value, the work of the folks at The Wall Street Journal really stands out. I’ve been endlessly impressed with the thorough, thoughtful and quiet way in which their financial reporters have kept the issues of risk, valuation and market stability at the forefront. They haven’t been screaming about it, but they have very faithfully found and explained news (whether about the occasional deceptiveness of the VIX or implications of tightening spreads in the face of loosening monetary policy) that strikes me as important for another not willing to assume we’ve reached some sort of “permanently high plateau” or a “new normal” where riskless 10% returns are baked in. To Jason, Justin, Chris & Co., sincere thanks. You’re good.

In particular, Jason Zweig continues to do really important, thoughtful work. His recent two-part report on the shrinking number of stocks (the small- and micro-cap universe is contracting sharply, which greatly increases the challenges that managers face) was surprising and interesting. And I was delighted by his column looking at our friend and too-occasional contributor Sam Lee’s take on being both a prudent investor and a bold speculator. I’m slightly stunned with Sam’s grasp of the implications of cryptocurrencies (Ethereum, in particular) and with Jason’s ability to walk us through the tale. It’s well worth reading. 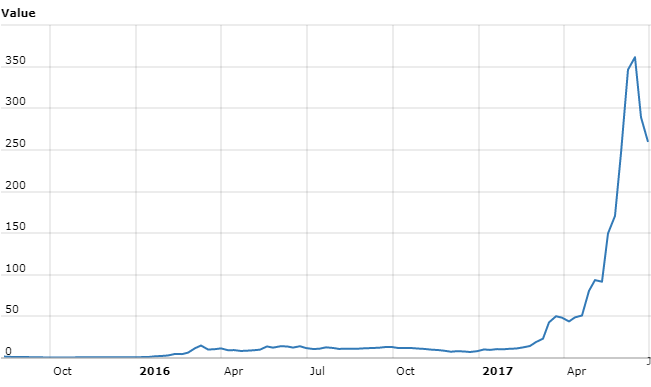 Now if only they could find an editorial staff that wasn’t so firmly stuck in the 16th century, I might even be willing to read those last four pages of the front section again.

And to you all: Thanks!

The Observer’s audience continues to be large, cheerful and growing. We’re up about 22% in readership over last June, for example, and the early months of the year saw about 34,000 readers a month drop by. Those numbers always drift down in summer as folks, sensibly enough, find better ways to spend their time.

We remain dedicated to helping folks, investors and managers alike, as best we can as often as we can. If you’d like to support that effort, we’d be grateful. You’d got three options: direct support through a tax-deductible cash gift (at $100 or more, we’d be happy to express our thanks by sharing access to MFO Premium with you), indirectly by using MFO’s link to Amazon (we receive a rebate of something like 5% of the value of anything you buy), or psychically by sharing your thoughts, kudos, questions, leads and suggestions with us. It’s always good to know that folks find something we’ve written useful enough to respond to.

Details about the first two options are laid out under the Support Us tab at the top of the page.

Thanks, especially, to the folks who’ve already committed and who, in several cases, have set up recurring monthly donations through PayPal; Brian, Greg, Deb, and Jonathan – You’re the best! Many thanks also, to those who sent donations this month, Hjalmar, Marc and John. We appreciate your help more than you know.

Enjoy the sum- sum- summertime, and we’ll see you again in August!