Matt Hougan of Inside ETFs and Dave Nadig of ETF.com hosted an Inside Smart Beta Conference this past month in New York City. Their career paths overlapped at ETF.com, which promotes itself, arguably so, as the “world’s leading authority on exchange-traded funds.” I find both Matt and Dave articulate thought leaders on ETFs and investing generally. They co-authored CFA’s A Comprehensive Guide to ETFs.

The venue in midtown Manhattan just off 6th Avenue drew some 330 attendees, including financial advisors and money managers. The event’s agenda comprised two dozen talks and panels, including Research Affiliates’ Rob Arnott and Shark Tank’s Kevin O’Leary. Vanguard was one of several key sponsors, along with JP Morgan and John Hancock.

If, like me, you’ve not been to NYC in a while, the former Pan Am Building is the Met Life Building, Trump Tower on 5th Avenue remains surrounded by police barricades playing havoc with nearby businesses and traffic, the marvelous One World Trade Center now dominates lower Manhattan skyline, construction is everywhere, Central Park is a jewel, and pizza-by-the-slice at places like Bleecker in Greenwich Village remains a whole other food group … amazing!

What is Smart Beta exactly?

Here’s another, by AQR’s Cliff Asness and John Liew: “Let’s be blunt. Smart Beta is mostly re-packaged, re-branded quantitative management… It takes well-established, quantitative investing styles, or factors, and implements them in a simple, transparent manner often, though not always, at lower fees than what we’ve seen in the past.”

Some of the better known “factors” are quality, value, momentum, size, and volatility. Smart beta ETFs target one or more such factors. In the opening keynote, Hougan and Nadig reported that 160 new smart beta ETFs have been introduced in the past three years. But while historically portfolios built on these factors outperform the market, they don’t work all the time, as depicted here:

The chart represents a cautionary tale for investor expectations. It occurred to me that like maximum drawdown, min and max rolling period returns should be including in all fund performance history, not just last 1, 3, 5, and 10 year look-back, as applicable.

The case for some ETFs over traditional mutual funds, but especially over actively managed ones, involves being cheaper, more transparent, rules-based, and more tax efficient. Perhaps no better example of a smart beta ETF strategy is defined in Wes Gray’s book Quantitative Value, A Practitioner’s Guide to Automating Intelligent Investment and Eliminating Behavioral Errors. We profiled QVAL in late 2014.

The case against some ETFs? See our David’s Certificate in ETF Punditry.

In a sense, factors are the new active. Factor-based indexes and trading rules can be automated. With automation, coupled with under-performance of traditional actively managed funds, follows elimination of money manager and trading roles, as evidenced by recent layoffs and skill reshuffling at firms like Goldman Sachs and Blackrock. 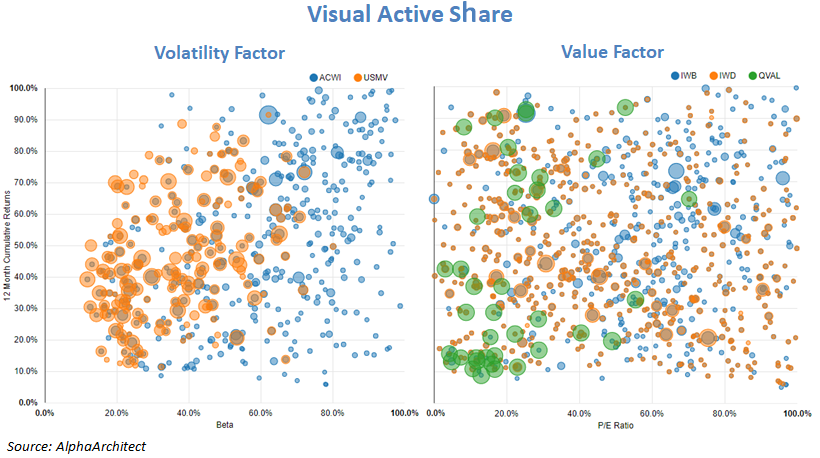 Here’s how iShares describes its Min Vol ETF (USMV) in the prospectus:

The Underlying Index is designed by selecting securities from the MSCI All Country World Index (the “Parent Index”), which is a capitalization weighted index, and then follows a rules-based methodology to optimize the Underlying Index and determine weights for securities in the index having the lowest total risk.

During one of several lively discussions, Bloomberg’s Eric Balchunas noted that closet-indexing is one of the industry’s dirty secrets: “Most smart beta ETFs are counterfeits with too much beta.” The visualizer above reveals that while IWD has a value tilt, it is not nearly as value oriented as QVAL. While touting the benefits of ETFs like QVAL, Eric argued: “Go big, or go Vanguard!”

A review of our Lipper Data Feed Service for month ending May 2017 reveals just over 2000 US ETFs versus about 7500 traditional open-ended funds. Assets under management (AUM) are $2.9 trillion for the former versus $17.4 trillion for the latter, excluding money market funds, or about 15%.

Here is a summary of top fifteen US ETFs by AUM:

Hougan and Nadig both believe AUM in ETFs will surpass that of traditional mutual funds in 6 to 8 years. A trend supporting this belief is that ETFs are the vehicle of choice of increasingly popular robo-advisors, like Wealthfront and Betterment. Hougan, in fact, tracks his own portfolio called The World’s Cheapest ETF Portfolio. “It’s one of the greatest deals in financial history,” shown here:

During another session, entitled “Smart-Beta Hot Seat,” Hougan asked Vanguard’s Dan Reyes “Why are you even here?” Vanguard actually offers 70 ETFs with $722 billion in AUM (second only to Blackrock), but most are vanilla-index, long-only funds with no leverage or derivatives. The implication of its strong showing at this conference is that Vanguard likely plans to launch actively managed ETFs and with lower fees.

Another notable presence was Dimensional Fund Advisors (DFA), historically the investment choice of Nobel Laureates, often offering funds with very high minimums and then only through financial advisors trained in DFA’s quantitative philosophy. They have now teamed with John Hancock to offer 12 multifactor ETFs utilizing John Hancock Dimensional “indexes designed by DFA, a company regarded as one of the pioneers in strategic beta investing.”

In the session entitled “Best Factor ETFs,” four speakers debated the merits of …

JPMorgan Diversified Return Global Equity ETF (JPGE) won the contest with the audience as it offered a “smoother ride” for investors, making it a more likely candidate to stick with versus the other more volatile offerings. 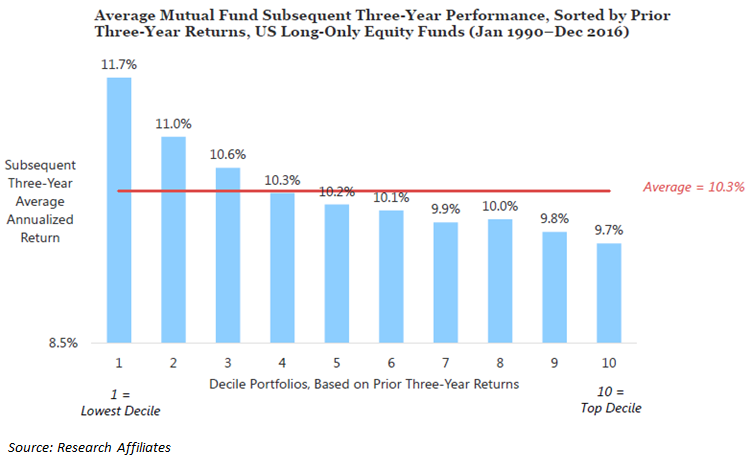 Kevin O’Leary shared how he tried all sorts of investments with proceeds from his sale of The Learning Company … hedge funds, hot managers, private equity. One thing he learned was that even the strongest managers “go flat or blow-up every 7-10 years.” The lesson led him to develop investment rules for stocks he owned: 1) no cashless sales, 2) no debt financed dividends, 3) no slowing of return on assets, and 4) no more than 80% of market volatility. These rules guided the creation of a series of indexes that support six O’Shares ETFs, which are the backbone of his family trust.