The managers seek total return over the long term. They invest in debt issued by Asian corporations, governments and supranatural institutions. The managers invest, primarily, in high-yield, dollar-denominated debt though they define that term broadly enough to incorporate both high-yield bonds and debt-related instruments such as convertible bonds, hybrids and derivatives with fixed income characteristics.  Around 20-25% of the portfolio has been in convertible bonds since inception, and that percentage is been pretty stable from year to year.

Matthews International Capital Management, LLC, the Investment Advisor to the Matthews Asia Funds, was founded in 1991 by Paul Matthews. Since then they’ve been the only U.S. fund complex devoted to Asia. They have about $27.5 billion in fund assets and advise18 funds. Of those, two focus on Asian credit markets: Strategic Income (MAINX) and Credit Opportunities.

Teresa Kong and Satya Patel. Before joining Matthews in 2010, Ms. Kong was Head of Emerging Market Investments at Barclays Global Investors (now BlackRock) and responsible for managing the firm’s investment strategies in Emerging Asia, Eastern Europe, Africa and Latin America. In addition to founding the Fixed Income Emerging Markets Group at BlackRock, she was also Senior Portfolio Manager and Credit Strategist on the Fixed Income credit team. She’s also served as an analyst for Oppenheimer Funds and JP Morgan Securities, where she worked in the Structured Products Group and Latin America Capital Markets Group.

Mr. Patel joined Matthews in 2011. Before that, he was an Investment Analyst with Concerto Asset Management. He earned an M.B.A. from the University of Chicago Booth School of Business, an M.A. in Accounting and Finance from the London School of Economics and a B.A. in Business Administration and Public Health from Georgia.

These aren’t yet considerations, and aren’t likely to become concerns for years. That said, Matthews has frequently closed their funds when they’ve deemed it in their shareholders best interests to do so.

As of December 30, 2016 (the latest Statement of Additional Information), neither of the managers has invested in the fund. Two of eight trustees have chosen to do so, though all of the trustees have investments in Matthews funds, with the two smallest stakes being held by the two newest trustees.

Donald Trump isn’t the argument for investing in Asian fixed income, but he appears intent on accelerating the argument.

It is inevitably the case that most of the world’s financial market in the 21st century will be centered in, and driven by, Asia. Just as economic developments in the late 19th century led to the migration of the world’s markets from London to New York, so the economic developments in the early 21st century will engender a similar transition toward Asia. The rise of New York did not make London irrelevant, it merely meant that London was no longer running the show. Something similar is underway now as Asia credit markets quickly expand and deepen.

The policies pursued by Mr. Trump seem likely to accelerate that evolution. His nationalist agenda implicitly, and sometimes explicitly, withdraws the U.S. from international leadership leaving an opening for China to assume what they believe to be their rightful place on the world stage. That’s exemplified by his withdrawal from the Paris climate accord. European Commission President Jean-Claude Juncker “explained to Mr. Trump … that it would not be good for the world or the United States if America was to literally step off the world’s stage. Because the vacuum will be filled, and the Chinese are in prime position to take on a leadership role.”

President Xi’s “One Belt, One Road” project – a $1.7 trillion infrastructure program to tie all of Asia, most of Europe and parts of Africa to China – is another step in that assertion. The consulting firm McKinsey described it this way, “One Belt and One Road (OBOR) … aims to create the world’s largest platform for economic cooperation, including policy coordination, trade and financing collaboration, and social and cultural cooperation.” The Trump administration’s decision to send a senior representative to the May OBOR Summit was played in the Chinese press as evidence of America’s tacit support, “Washington’s participation … [will] help win Beijing and its infrastructure projects more international understanding and influence.”

Here’s the argument: Asia is not, and cannot be treated as, some backwater region in the global financial system or in investors’ portfolios. Its capital markets are already large, they’re maturing quickly and seem destined to play a major role in global finance.

Nonetheless, most American investors have minimal exposure to it. There are two reasons for that underweight. First, bond indexes tend to be issuance-weighted. That is, they place the greatest weight on the largest (i.e., most indebted) issuers, not on the most credit-worthy. Asia has, traditionally, been a modest user of such markets. Second, investors are stumped by “the jumbo shrimp conundrum.” As with “jumbo shrimp,” the phrase “Asian fixed income” seems to have a built-in contradiction: “Asian” means “emerging markets” and “scary” but “fixed income” means “safe and reliable.” Our antiquated view of the Asian markets leads us to look elsewhere, even in a yield-starved world.

Matthews is trying to change that by offering small investors access to the Asian fixed income markets. Four things you need to know:

The managers are really good. In our conversations, Ms. Kong and Mr. Patel have been consistently sharp, clear and thoughtful. They evidence profound understanding of their portfolio, which they can comfortably explain to non-specialists, and of the markets within which they operate. Their Strategic Income Fund has returned 5.0% annually since inception, trailing its EM Hard Currency Debt peer group by 0.4% annually but with a far lower standard deviation, maximum drawdown and downside deviation, and substantially higher Sharpe ratio.

The fund’s targets are reasonable and clearly expressed. “The objective of the strategy,” Ms. Kong reports, “is to deliver 6-9% return with 6-9% volatility over the long term.” In its first year, the fund returned 8.8% and a standard deviation of 3.4%.

Their opportunity set is substantial and attractive. The Asia credit market is over $600 billion and the sub-investment grade slice which they’ll target is $130 billion. For a variety of reasons, “about a quarter of Asian bonds are not rated by one of the Big Three US rating agencies anymore,” which limits competition for the bonds since many U.S. investors can only invest in rated bonds. That also increases the prospect for mispricing, which adds to the Matthews’ advantage. “Over the past 15 years,” they report, “Asia high yield has a cumulative return double that of European, LATAM and US high yield, with less risk than Europe and LATAM.” Here’s the picture of it all: 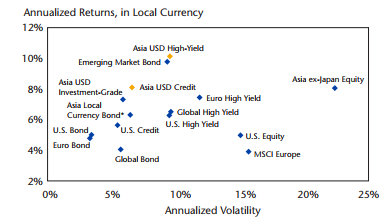 The best investments lie in the upper-left corner of that graph, representing the highest possible returns and the lowest possible volatility. You might draw a line between Asia Credit and Asia HY (the two gold points) then assume that the fund will fall on that line rather nearer to Asia HY.

The fund’s returns are independent of the Fed. U.S. investors are rightly concerned about the effect of the Fed’s next couple tightening moves. The correlation between the Asia HY market and the Barclays US Aggregate is only 0.39. Beyond that, the managers have the ability to use U.S. interest rate futures to hedge U.S. interest rate risk.

More than ever, Asian economies are marching to the beat of their own drums rather than hinging on the US to drive business cycles. A decade ago, Asia needed to export to the U.S. and Europe to drive growth, and so Asian business cycles were closely linked to the U.S. Today, growth in Asia is driven by trade within Asia and domestic consumption of goods and services and has much less to do with exports to the U.S.

Asia and the U.S. will always be linked because of the global nature of companies and capital flows, but correlations between Asia and the U.S. – whether we look at interest rate cycles or asset class returns – are relatively low.

If U.S. high yield bonds make sense for your portfolio, so might Matthews Asia Credit Opportunities. Asian high-yield and credit opportunity investments have a long track record and, in particular, a long record of offering higher returns with lower volatility than US high-yield. The same thing is true when compared to EM bonds; the Asian products simply and consistently outperform the global EM bond markets.

Even investors in Matthews Asia Strategic Income (MAINX) would get some diversification value from MCRDX. MAINX, they noted, “is an unconstrained bond fund with the full flexibility to pursue return opportunities in Asian credit, currencies or interest rates. MCRDX is more focused, deriving most of its returns from credit and most often in high yield.” MCRDX is also largely buffered from the effects of currency fluctuation which helped it substantially in the immediate aftermath of the US election.

If you want exposure to Asian markets, Matthews is the best, deepest and more experienced option available to most U.S. investors. Both of these funds are worth serious examination by investors who are interested in income but concerned about the parlous state of Western credit markets.

Disclosure: while the Observer has no financial or other ties to Matthews Asia or its funds, I do own shares of MAINX in my personal account and have recently added to them.

Matthews Asia Credit Opportunities. Special plaudits to Matthews for two features of their website. First, they offer frequent analyses of developments affecting Asian finance. Second, they offer biographies of every member of their funds’ board of trustees. The board serves as investors’ agents; that is, they’re elected by the investors and are charged with pursuing your best interests in all dealings involving the fund. In reality, most firms barely acknowledge that they exist.

© Mutual Fund Observer, 2017. All rights reserved. The information here reflects publicly available information current at the time of publication. For reprint/e-rights contact us.