Chuck Jaffe has been named editor-in-chief of RagingBull.com. Do I even make jokes about Chuck and a site that highlights “bull”? No. No, I do not. Chuck’s appointment is part of a process to increase the stock-touting site’s journalistic integrity and transparency.

In advance of its merger into Century Shares Trust (CENSX), the Congress Large Cap Growth Fund (CAMLX) is changing its investment objective from “long term capital appreciation” to “long-term capital growth.” Given that, as the Investopedia rightly notes, “capital growth … is also known as capital appreciation,” it’s not immediately clear why the adviser had to rush to get the word out.

A note to the Chinese: Your Wall cannot save you!

Vanguard received a “wholly foreign-owned enterprise” license from the China Securities Regulatory Commission last November and has now opened a subsidiary in Shanghai. A company representative says, “We look forward to introducing investors in China to our low-cost philosophy [which] could result in the so-called Vanguard effect – the tendency for our entrance into a market to drive down investment costs by encouraging other companies to lower their fees to compete with Vanguard.”

Beyond that, the industry continues to make widespread but shallow efforts at self-improvement: lots of minor fee reductions and some other share class simplifications that give more investors access to lower-cost shares.

Longleaf Partners Fund (LLPFX) has been closed to new investors.

Effective August 15, 2017, AMG FQ U.S. Equity Fund (FQUAX) becomes AMG FQ Long-Short Equity Fund and, presumably, starts shorting stocks. Since they haven’t been particularly distinguished as long-only investors (they’ve trailed 75% of their peers over the past five years with a 175% annual turnover), the desire to try something new is understandable.

In one of those moves that just cries out “hey! The marketing team just weighed-in,” Calamos High Income Fund (CHYDX) has been renamed Calamos High Income Opportunities Fund. The management team and strategy are unchanged, there’s a new benchmark index and it looks like expenses are being reduced by 8 bps to a well above-average 1.25%.

On June 29, 2017, the name of the Entrepreneur U.S. All Cap Fund (IMPAX) changed to Entrepreneur U.S. Small Cap Fund, which means that the fund’s mid- and large-cap holdings are getting trimmed away. One month later, July 31, 2017, they’re liquidating the fund’s Investor share class. While many funds, faced with that decision, move their Investors into Institutional shares, the Entrepreneurs are simply popping checks in the mail and bidding their Investors adieu.

1st Source Monogram Income Equity Fund (FMIEX) begat Wasatch Large Cap Value Fund and in the third generation Wasatch Large Cap Value begat Wasatch Global Value Fund. The fund has been pretty mediocre since David Powers took over from the original management team in August 2013 and it has no real tradition of global investing (international stocks are a tenth of the portfolio), so it’s hard to get excited.

The Rainier funds are reorganizing into Hennessy funds sometime in the third quarter of 2017. Here’s the translation:

Similarly, the former Scout funds are all being rebranded as Carillon and Carillon Reams funds, the latter after the name of the long-time sub-adviser to the Scout bond funds. Ecce:

Somewhere during the 4th quarter, the Sentinel funds will all become Touchstone Funds, some by adoption and others by absorption.

Finally, WisdomTree has decided to add “U.S.” to the names of a bunch of its (presumably domestic) equity funds.

On June 22, 2017, the Board of Trustees “determined to terminate and wind up” the Alpine Emerging Markets Real Estate Fund (AEAMX). It’s about impossible to benchmark the fund’s performance since pretty much no one else operated in the space. No word on when that’s going to occur.

One of our weirder liquidations this month also comes from Alpine. I’ll quote without comment: “Effective June 22, 2017, the Board of Trustees of the Alpine Global Realty Growth & Income Fund approved the termination of the Fund. There were no shareholders on that date. As the Fund has ceased operations, shares of the Fund are no longer being offered.” Oooookay then.

AMG Managers High Yield Fund (MHHAX), a modestly above-average fund with a stable management team and manageable expenses (1.15%) will liquidate and terminate on or about August 31, 2017. The portfolio began transitioning to cash in June 12, 2017.

Credit Suisse Emerging Markets Equity Fund (CSNAX) – which managed to make about 1.2% over the course of 40 months – was liquidated on June 23, 2017.

Driehaus Select Credit Fund (DRSLX) will liquidate on July 24, 2017. As you might expect of a Driehaus fund, DRSLX (the blue line) has been … uhhh, bold. 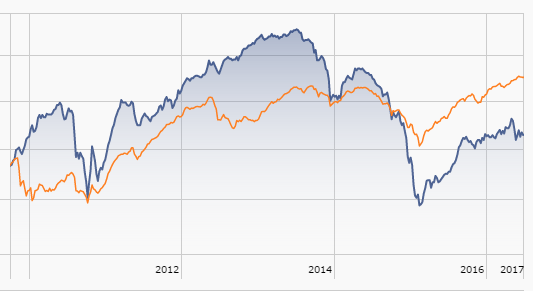 Franklin MidCap Value Fund (the “Fund”) is expected to merge into Franklin Small Cap Value Fund around the beginning of December, 2017.

Frontier Netols Small Cap Value Fund (FNVSX) essentially disappears on July 1, 2017. The principal at Netols is retiring and so Netols Asset Management is getting out of the business; the Board brought in Phocas Financial. The new manager “uses a different investment strategy than Netols … it is expected that most of the Fund’s existing holdings will be sold and replaced by new securities.” That likely signals a noticeable tax bill. On the upside, Phocas has done a nice job with Frontier Phocas Small Cap Value (FPVSX),

The Grand Prix Investors Fund (no ticker symbol?) will close and liquidate on July 28, 2017. This offering, launched and managed by Autosport Fund Advisors, is bad but not nearly so bad as the other Grand Prix fund, a long-dead reminder of the foolishness of the 1990s and winner of a 2004 Booby Prize from Forbes.

JP Morgan is asking its shareholders to authorize the merger of JPMorgan Dynamic Growth Fund (DGAAX) into JPMorgan Large Cap Growth Fund (OLGAX).Both are four star funds with the same manager; OLGAX is about 30-times the size of its sibling. If approved, the merger would go through in the fourth quarter.

Mirae Asset Global Dynamic Bond Fund (MAGDX) will liquidate its assets “as soon as practicable” and will liquidate itself on August 4, 2017. It’s been a singularly strong fund since inception, despite rather higher fees than one might like.

Nationwide Portfolio Completion Fund (NWAAX) will liquidate on or about August 18, 2017, presumably leaving a lot of Nationwide portfolios incomplete.

All four of the New Century funds of funds – Alternative Strategies (NCHPX), Balanced (NCIPX), Capital (NCCPX) and International (NCFPX) – will liquidate, assuming shareholder approval, at the end of August, 2017.

QS Dynamic Multi-Strategy Fund (LDFAX) “is expected to cease operations on or about August 25, 2017.”

State Street Global Advisors announced plans to liquidate nearly 20 ETFs, almost all of them international equity funds, by the end of July. They are: