We thought we’d start catching up with the 130 U.S. equity funds which have passed their second anniversary but have not yet reached their third, which is when conventional trackers such as Morningstar and Lipper pick them up. As Charles has repeatedly demonstrated, the screener at MFO Premium allows you to answer odd and interesting questions. As I, and other users of the site, have asked him, “would it be possible to …?” Charles has almost always responded with a cheerful “let me see what I can do. I’ll get back to you.”

Two days later, the screener has an entirely new and useful capability. I’m vaguely awestruck by that sort of energy, passion and genius. So, like to find two year old open-end no-load funds with the highest Sharpe ratios that are open to retail investors? No problem! 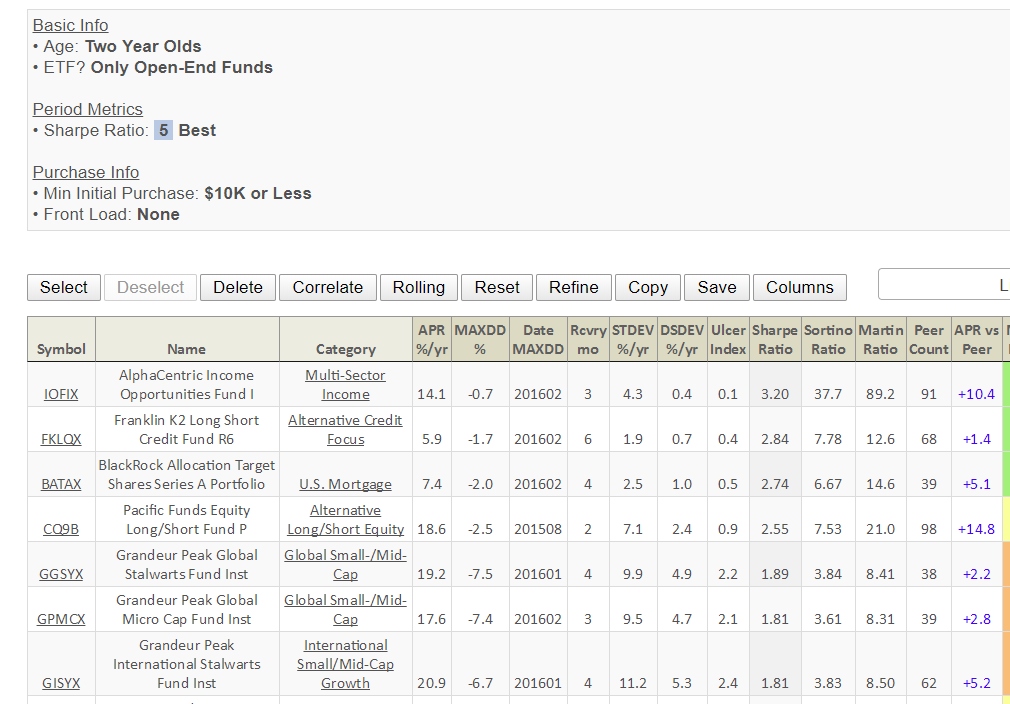 Herewith are some of the highlights from a screen of youngsters who will reach their third anniversary in 2018.

Funds at the greatest risk of being miscategorized by tracking firms

We start with the question, “which of these funds might be badly miscategorized?”

That’s an important question, since investors tend to buy the funds with the highest ratings from firms such as Morningstar and Lipper. In general, that’s an okay decision: five star funds rarely become stinkers, one star funds rarely become gems. The exception is when a fund has gotten dropped in an inappropriate peer group, so that Morningstar is looking at a banana and trying to judge it as an apple. Our two favorite examples are RiverPark Short Term High Yield (RPHYX) and Zeo Strategic Income (ZEOIX). Both are outstanding at what they do: generate low single-digit returns (say, 2-4%) with negligible volatility. And both get one star from Morningstar because they’re being benchmarked against funds with very different characteristics. (Jeff Ptak, one of the Morningstar folks and an occasional respondent to our essays, puts out that these are really exceptional circumstances; Morningstar categorizes thousands of funds and finds sensible homes for the vast majority. We agree.)

How did we check for miscategorized funds? Simple, using the screener at MFO Premium, we identified all of the two-year-old US equity funds, then sorted them based on their correlation to their peers. We found that over half of the funds were indexes or closet indexes (correlations over 95, with some “active” funds at 98). Just six funds, three active and three index, had correlations under 75.

Cambria Value and Momentum ETF (VAMO, as in Vamoose?) has the lowest correlation (0.43) with its Lipper large cap value peers. Why should you care? Because a low correlation with the peer group raises the prospect that a fund has been miscategorized and it makes it very likely that any rating it receives – positive or negative – will be unreliable. One illustration of that possibility: 5 of 6 six low correlation funds trail their peer group with VAMO lagging by 14% annually. Does that mean they’re bad funds? No, it means that its strengths and weakness can’t be predicted from its peer group.

The other two-year-olds with peer group correlations under 0.75 so far:

The most independent fund: VAMO

The bane of active management is timidity, which often translates into anxiously adhering to a benchmark’s or peer group’s weighting. From a manager’s perspective, the (cowardly) logic is compelling: “if I only sink when everyone else is sinking too, they’re not going to have any reason to single me out and fire me.”

Cambria Value and Momentum ETF (VAMO, as in Vamoose?) has the lowest peer correlation of any of the two-year-old equity funds. Its correlation is 0.43 with its Lipper large cap value peers. Researchers view momentum + value as a sort of chocolate + peanut butter pairing. Both are sources of mispricing in the market; based on a reading of 20 years’ worth of research, Larry Swedroe (2016) concludes they are “two of the most powerful explanatory factors in finance.” Momentum is a price anomaly that seems stable and exploitable; that is, it’s been consistent and predictable across market cycles. It’s flawed by a tendency to overpay: stocks with momentum are often moving quickly from “reasonably valued” to “noticeably overvalued.” Valuation is an equally powerful anomaly that suffers from the opposite problem: undervalued stocks can remain undervalued … well, almost forever. Understandably then, momentum and value are negatively correlated; when one’s lagging, the other tends to be leading.

That said, the combination of value and momentum has a long but very mixed history. American Beacon Bridgeway Large Cap Value (BWLIX) is a five-star fund with a near 15-year record of above average returns with below average volatility. (Most of that record is attributable to the institutional share class BRLVX, but performance for the newer retail class has been adjusted to account for differences in e.r.) The profile at MFO Premium shows the institutional version outperforming its peers by 1.7% annually since inception, with lower volatility. Beyond that, though, the strategy has been … umm, incompletely successful. In ye olden dayes at FundAlarm, we wrote about American Century’s value + momentum fund, Income & Growth (BIGRX) which strikes me as nearly unpredictable: modestly above average in one full market cycle, noticeably below in the preceding one, winner in some down markets, loser in others, likewise for up markets. Numeric Investors, which practiced it, liquidated in 2007. The 20 year old IMS Capital Value Fund (IMSCX) was solid until 2009, but has been a consistently laggard since. BIGRX has been a tepid performer of late.

Predictably, a number of ETF sponsors have also tried to join the party.

Cambria Value and Momentum ETF (VAMO) is a purely US vehicle, which uses the Schiller CAPE to assess the value component. It’s actively managed by Mebane “Meb” Faber and Eric Richardson with expenses of 0.59%.

PowerShares DWA Momentum & Low Volatility Rotation Portfolio ETF (DWLV) is an ETF of low-vol and momentum ETFs. The fund is run by a team of guys from Invesco and charges 0.52%.

None have a three-year record and none have performance that cries out “Buy me! Buy me!” If the combination interests you, we’d recommend starting with the Bridgeway fund.

The funds that are making serious money

When markets are rising, everybody’s question is the same: who’s making the most?

There are two ways to answer that. One way is to look at total returns. As of Halloween (our data is current as of the end of last month), the clear winner is the $8 million Zevenbergen Genea (ZVGIX) fund, a focused fund with an emphasis on tech. (What’s a “genea”? Old Greek word related to “genealogy,” it sometimes signals “a generation,” which aligns with the fund’s emphasis on having a long-term view.)

Sometimes a fund is good not because the fund is good, but because its investment style or focus is hot. For example, a hot energy market makes even bad energy fund managers look like geniuses. You’ll notice that two of the six top performers are distinguished for what they did not invest in: “ex Health Care” and “ex Energy” tells you that these funds are winning just because the excluded sectors are, for now, losing.

To control for that, we can look for funds that are distinctively better than their peers. Seven funds are beating their peers by more than 5% per year so far, with 50% of those being passive.

Only two of the six funds with the highest total returns are also substantially leading their peers. Half of the peer beaters consciously factor dividends, which sometimes signals the quality of a firm’s management, into their strategies.

What happens when you mix in the rest of the world?

Fair question. So far we’ve only looked at US equity funds. Here are the five international funds that combine the best absolute and relative annual returns; that is, these are funds that make a lot and make a lot more than their peers.

Top performer: MFS Blended Research Emerging Markets Equity (BRKVX), with an annual return of 23.5% and a 5.8% lead over its EM peers.

Grandeur Peak International Stalwarts (GISYX) has returned 20.9% a year and leads its international small-to-mid peers by 5.2% annually. The two Stalwarts funds, Global is the other, represent the “alumni” of Grandeur Peak’s (closed) small- and micro-cap funds. They’re firms that the fund continues to find attractive, even though they’ve appreciated too much to remain eligible for the other funds. Grandeur Peak’s discipline is so clean and their success so consistent that our colleague, Sam Lee, has referred to them as “the Platonic ideal of a fund advisor.”

T. Rowe Price Emerging Markets Value (PRIJX) has earned 20.7% per year, 3% ahead of its EM peers. Our November 2015 Launch Alert contained a thoughtful explanation from Nick Beecroft, based in Price’s Hong Kong office, about why the manager’s focus on re-ratings catalysts would allow him to succeed in the unpopular craft of EM value investing.

Grandeur Peak Global Stalwarts (GGSYX), which has made 19.9% annually, 2.2% better than its global small- to mid-cap peers.

Brown Capital Management International Small Cap (BCSFX), up 18.8% and 3.2% ahead of its peers.