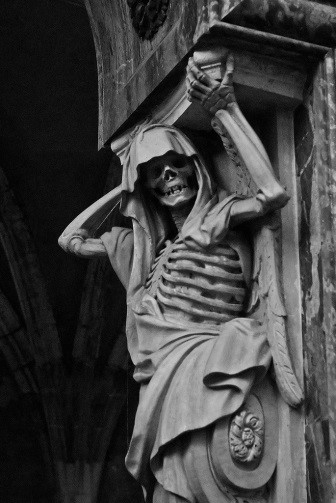 I’m not sure that Bitcoins actually exist. I’ve never seen one, and I’ve never interacted with one. I can’t quite explain what they are, beyond invoking the term “cryptocurrency” (which leads me to wonder if its ghoulish story will eventually be popularized under the title, “Tales from the Crypto …”?). Our colleague Sam Lee is intrigued by the potential for the underlying software, though skeptical of Bitcoin per se.

Not quite as skeptical as Hamilton Nolan seems to be. Mr. Nolan, whose writing style occasionally makes Jim Cramer read like a Tibetan monk, howls about finance and injustice for the Kinja family of websites. He’s clear and often enough thoughtful.

His thoughts on Bitcoin are summarized in an article entitled, “Hey Idiots–You’re Gonna Lose All Your Money on Bitcoin, Idiots” (11/28/2017).  Before you click on the link, I need to remind you that his language is inappropriate in civilized discourse; I suspect that even Gordon Ramsay would object. He makes two points: (1) people have no earthly idea of what they’re buying – or investing in – when they buy Bitcoins and (2) it’s okay for you to own something that goes up like a rocket as long as you remember what the next phase of each rocket’s life is like. 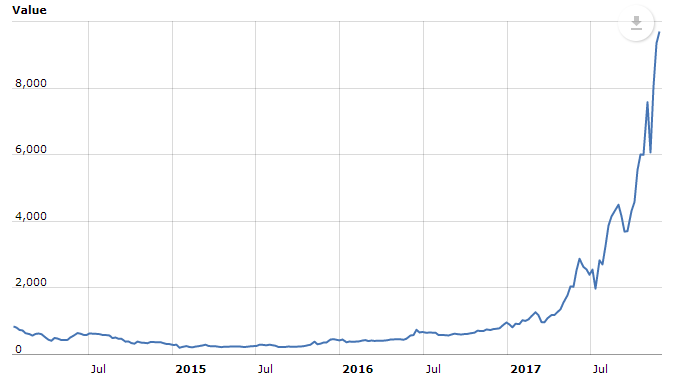 And, too, it uses horrendous amounts of energy.

In October 2017, LedgerX began trading bitcoin options. Both the Chicago Merc and CBOE are going to launch bitcoin futures. NASDAQ is being coy on the subject, with its president Adene Friedman admitting only to “active dialogue with a lot of clients and with partners about what might be possible.” The Financial Times reports that bitcoin derivatives will begin trading by Christmas:

Trading in bitcoin-related derivatives will begin before Christmas after CME Group, the world’s largest futures exchange, and two other venues said they had self-certified their planned products with US markets regulators. The Chicago group and rival CBOE Global Markets said on Friday they had self-certified the contracts they plan to offer investors with the Commodity Futures Trading Commission. Cantor Exchange, run by Cantor Fizgerald, has opted to self-certify bitcoin binary options. (FastFT, “Bitcoin futures trading to start in time for Christmas,” 12/1/2017)

ProShares has already filed to launch an ETF that would trade such derivatives once they become available. A couple exchange-traded products trafficking in bitcoin have been proposed, by VanEck and BATS. Both were snagged by the SEC because it’s concerned about a fundamental element of bitcoin’s design: they were designed to be unregulated and beyond any government’s control. That’s great if you want to smuggle funds out of a kleptocratic dictatorship; it’s bad if you’re the agency responsible for protecting investors from fraud.

In the meanwhile, the larger question is, how might a Bitcoin collapse affect the rest of us? It’s wildly volatile, seeing short-term losses of 20-40% since September, with one former hedge fund manager allowing that it could quadruple in price in 2018 and that it also represents “the biggest bubble of our lifetimes.”

So who gets it when the … uhh, bit hits the fan? This year, likely fewer people than you might fear. The currency is largely useful for speculation, rather than for financial transactions, which insulates those not speculating in it. Bitcoin mining requires specialized mini-computers, the demand for which is so high that it’s sent prices for graphics cards made by Nvidia and Advanced Micro Devices to record highs; TDAmeritrade thinks such stocks will take a substantial hit if demand collapses and miners dump thousands of used components on the market. While many tech and financial firms are exploring the underlying technology, few have reported direct exposure to cryptocurrencies.

The risk becomes critical when bitcoin moves from pure speculation and integrates into the financial system. The arrival of bitcoin ETFs will allow investors to move portions of their retirement savings from traditional assets into something with more growth potential. (I wouldn’t be surprised if the State of Illinois, faced with a deficit in their retirement system, toyed with the magic wand, too.) The Wall Street Journal quotes Joe Saluzzi of Themis Trading, who offers a nice capsule description of what we’ll be doing: “You’re going to put a derivative on a derivative of an unregulated asset? That, to me, is a recipe for disaster.”  The Fed seems to agree. On November 30, 2017, Randal Quarles, a vice chair of the Fed, argued:

The “currency” or asset at the centre of some of these systems is not backed by other secure assets, has no intrinsic value, is not the liability of a regulated banking institution, and in leading cases, is not the liability of any institution at all. While these digital currencies may not pose major concerns at their current levels of use, more serious financial stability issues may result if they achieve wide-scale usage.

Once there’s a working options and futures market, actual bitcoin ETFs will likely come to market. The WSJ sources estimate they’ll be widely available within 18 months. In the interim, anxious ETF providers have turned to “blockchain,” the logic behind bitcoin and other cryptocurrencies, as the next-best thing. In the past month, four blockchain ETFs filed for registration with the SEC.

None of which have a track record and none of which have a meaningful investable universe. That is, there are no publicly traded companies that specialize in blockchain; there are mostly companies with a dozen other lines of business that have some sort of efforts going into blockchain. The “blockchain universe” is a small, motley collection of firms that recently changed their names to blockchainify them (360 Capital Financial suddenly became 360 Blockchain), over-the-counter stocks, foreign small caps and recent IPOs. The number is small enough that if you want to build a diversified portfolio of 15-20 blockchain stocks, you need to buy all of the blockchain stocks. Like 3D Printer and Robotics funds, it’s not clear that there’s any meaningful place for an investor to go.