“In three words I can tell you everything I have learned about life. It goes on.”

One of the more entertaining stories of September, reflecting just how far we have fallen, was to be found in the Business Section of the New York Times on September 12, 2018. A senior investment banker and partner at Goldman Sachs made a call to Goldman’s whistle-blower hotline in 2014 to complain about a range of unethical practices. The banker expected the outside law firm monitoring the hotline to investigate the allegations and share the results with the independent directors on Goldman’s board. Instead, Goldman’s general counsel took on the investigation and other senior executives at the firm, including the incoming CEO, urged the complaining banker to move past his complaints, which internally were considered “overblown.” The nature of these concerns dealt with a culture where senior bankers allegedly sought confidential client information from the complaining banker, which was intended to be shared with other Goldman customers or in other ways used to benefit the firm. Perhaps most intriguing, even though the allegations reflected a culture and ethics that supposedly had been purged and reformed after 2008, the complaining banker was apparently told by Goldman’s new CEO, that his concerns simply reflected “the way Wall Street worked.”

I wish I could say I was shocked by all of this, but I am not. My sense is that where people make a whistle-blower complaint, they often end up being the ones penalized. And if the complaint is anonymous, I can say with almost absolute certainty that more resources will be dedicated to trying to unmask the anonymous complainant than will be spent on investigating the allegations. And often, in perverse fashion those responsible for the behavior complained about are handsomely rewarded for their “creativity.” Talk about a chilling effect upon those who remain, especially when one now throws the potential for #hashtag me too complaints into the mix. 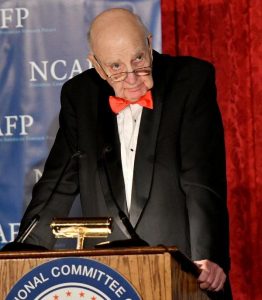 Paul Volcker, in a recent interview in the New York Times on October 23, 2018, indicated that he thought the problem was that we have developed a plutocracy, consisting of an enormous number of very rich people who think they got that way by being smart and constructive. Volcker’s issue is that he thinks the educational system has been perverted by money (somewhat like Congress has become perverted by the permanent campaign, where dialing for dollars is ongoing). Rather than the schools teaching about governing, the elite universities focus on policy. Volcker fumes that “when you go to a school of public policy, you’re not learning how to run the goddamn government. You’re learning how to debate political issues.” And the idea, which Volcker supports, that we need stronger regulators in anticipation of the next crisis (and make no mistake, there will be a next crisis) is not high on anyone’s list of most needed issues to be addressed by Congress.

Who Did the Work?

When I joined Harris Associates in 1995, the domestic research department prided itself on sourcing its own investment ideas. The Assistant Director of Research, shortly after my arrival, congratulated me because the institutional salespeople in Chicago and New York were complaining to him that I was regularly hanging up on them. Fast forward ten years or so, and the internal dynamics began to change as a younger generation, some coming out of the “Sell Side” of the Street started to look at Wall Street research in a slightly different fashion. To take a phrase regularly in use by the Russian intelligence services, the institutional sales people and institutional research analysts were “useful idiots.” And I will distinguish between the investment analysts who supported the institutional research being pedaled for commission dollars as opposed to the investment banking analysts, who were and are an entirely different kettle of fish. Getting access to those people was next to impossible, but not impossible. Fast forward again to the present day.

My former partner Clyde McGregor in his Q3 letter spoke of hiring new investment analysts regularly who are value oriented in their approach, but looked at or defined value differently, expanding the way the firm thought about things. I wonder to what extent that approach is colored by the existence of clubs or organizations like “Scorched Earth.” A friend of mine, in his own investment firm in Chicago, indicated that Scorched Earth, somewhat akin to the hedge fund lunches and dinners often held in New York, is a group that gets together a few times a year, to present and discuss investment ideas. The group is composed of investment professionals, primarily analysts, at Chicago investment management firms. Apparently one of the research partners at a Chicago firm, in the September time frame, presented Facebook as an idea. One assumes that this was after his firm either rejected the idea, or, had already taken their position in the security. It still begs the question as to what the due diligence is after an idea is sourced out of one of those presentations.

Different people in the investment world have reacted differently to this subject. Some think an idea, if good, can be sourced from anywhere, as long as you do the ultimate due diligence work. Myself, I think there is a danger of group think, which is a strong possibility when you have people investing in the same large cap universe. And it can be a problem, even when it is not. Around the dot com craze, many value managers had similar portfolios, so even if only one was being hit by redemptions, everyone was hurt. At this point, I am in the Buffett camp. Good ideas are hard to come by. We only need a few of them to have a good year. So why share them when illiquidity makes it so difficult to establish a meaningful position.

Should mutual funds be owned in anything other than tax-free accounts? We will know at the end of this year whether redemptions have triggered portfolio manager selling to raise cash to meet those redemptions. Will there be large capital gains distributions passed on to individual shareholders in taxable accounts? Stay tuned. More and more, I am of a mind that almost all fund investments should be in tax-exempt accounts.