I hope that Readers enjoyed their Thanksgiving as much as I did and wish everyone a safe and happy holiday season and a prosperous new year.

I expect this Santa Claus Rally will give way to a New Year’s hangover as investors start to anticipate a recession more than they fear inflation. On November 10th, the Consumer Price Index for all Urban Consumers was released to show the inflation rate increased by 7.76% from a year ago and 0.44% from the previous month which is still a high annual rate of 5.3%. The minutes of the November Federal Open Market Committee Meeting provide insights:

The staff, therefore, continued to judge that the risks to the baseline projection for real activity were skewed to the downside and viewed the possibility that the economy would enter a recession sometime over the next year as almost as likely as the baseline. (“Minutes of the Federal Open Market Committee November 1–2, 2022”, FOMC)

I consolidated the outlook from the Federal Reserve Bank of Philadelphia’s Fourth Quarter 2022 Survey of Professional Forecasters based on thirty-eight forecasters surveyed. The outlook is for slow growth during the first three quarters of next year with a high risk of a negative quarter. Unemployment is expected to rise modestly and inflation to fall to three percent by the end of the year.

Signs of a recession are increasing. The Conference Board’s Leading Indicator has been falling for eight consecutive months as reported by Greg Robb at MarketWatch in “Economy May Be in a Recession Already, Conference Board Says, After Leading Index Drops for Eighth Straight Month.”

Consensus is building among economists, business leaders, and fund managers about the probability and severity of a recession next year. Mohamed El-Erian is the President of Queen’s College in Cambridge and chief economic adviser at Allianz. Dr. El-Erian wrote “Not Just Another Recession” in Foreign Affairs (11/22/2022, free registration required), describing his belief that we are headed for a severe recession and that shocks will become more frequent. The reasons are longer-term trends in global supplies, less liquidity from central banks, geopolitical risk, climate change, and instability in financial markets. Dr. El-Erian advises that households, companies, and governments need to learn to navigate this new economic and financial shift.

Theon Mohamed at Markets Insider summarized the views of a dozen business leaders in “Jeff Bezos, Elon Musk, and Ken Griffin Are Sounding the Alarm on a US Recession. Here Are 12 Dire Economic Warnings from Elite Commentators.” I relate most to the quote from Jeff Bezos, founder of Amazon and Executive Chairman, who said, “Take as much risk off the table as you can. Hope for the best, but prepare for the worst.”

Steve Goldstein at Market Watch describes that “Fund Managers Are Overwhelmingly Forecasting Stagflation Next Year With No One Anticipating Goldilocks Scenario.” Mr. Goldstein describes a survey of 309 people managing $854 billion in assets, where 92% expect below-trend growth and above-trend inflation next year. The fund managers are underweight stocks and overweight cash. Mr. Goldstein summarizes expected returns as:

Over five years, the fund managers anticipate 6.1% per year returns in the S&P 500 4.8% returns from U.S. corporate bonds and 4.2% returns from U.S. government bonds. (Steve Goldstein, “Fund Managers Are Overwhelmingly Forecasting Stagflation Next Year With No One Anticipating Goldilocks Scenario”, MarketWatch, November 15, 2022)

Recession is my base case, and I have already taken risk off the table. How does an investor prepare for this investment environment? Matthew Fox at Market Insider describes Michael Hartnett’s view from Bank of America that investors should consider buying bonds in the first half of 2023 and stocks in the second half. Short-term bonds are a good investment when rates are rising, and longer-duration bonds rise in value as interest rates fall.

For a great summary of likely rate hikes, I refer Readers to a Bloomberg article by Steve Matthews and Chris Anstey, “Wall Street at Odds.” Wall Street is looking for rate hikes to nearly 5% by June of next year and tapering to 4.4% by the end of the year. Suze Orman elaborates on building Treasury ladders courtesy of Dana George at the Motley Fool in “Why Suze Orman Thinks Treasury Ladders Are a Good Investing Option.” Ms. Orman makes the point that “it’s wise to make sure a slice of their portfolio is guaranteed.”

Having to take withdrawals at the bottom of a bear market can devastate retirement savings. One of my strategies to reduce this risk is to lock in treasury yields in order to match withdrawals for 2025 through 2030, with yields currently ranging from 3.8% to 4.4%. This will lock in about 30% in one conservative Traditional IRA and, to a lesser extent, in other portfolios. I prefer to invest in multi-asset funds for simplicity, but this change to strategy will result in shifting into a more active approach instead of multi-asset funds.

The chart below shows that the current yield curve, as of November 26th, has remained high for durations less than two years and fallen significantly for longer durations compared to November 1st. Short-term rates will rise, and longer-term rates are likely to invert further. 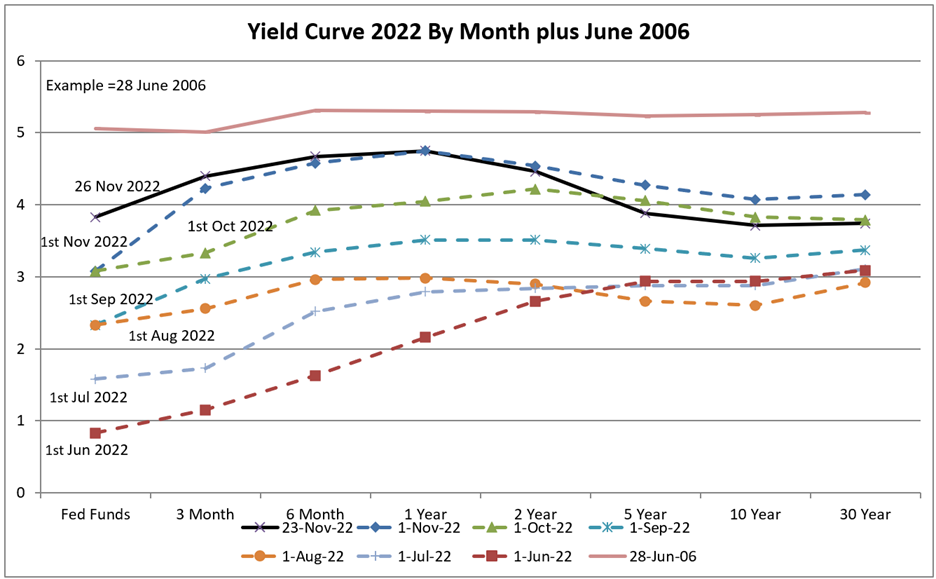 I track nearly three hundred funds in over one hundred Lipper Categories using MFO Premium’s MultiSearch. I rank these funds based on Momentum, Risk, Risk Adjusted long-term Return, short-term returns, and Money Flow. The top-rated Lipper Categories are shown below. Average metrics are shown based on three-year performance. Monthly returns and percent below the 52-week high are from Morningstar. At this point, I am not adding to equities, and I am seeking to extend bond durations. 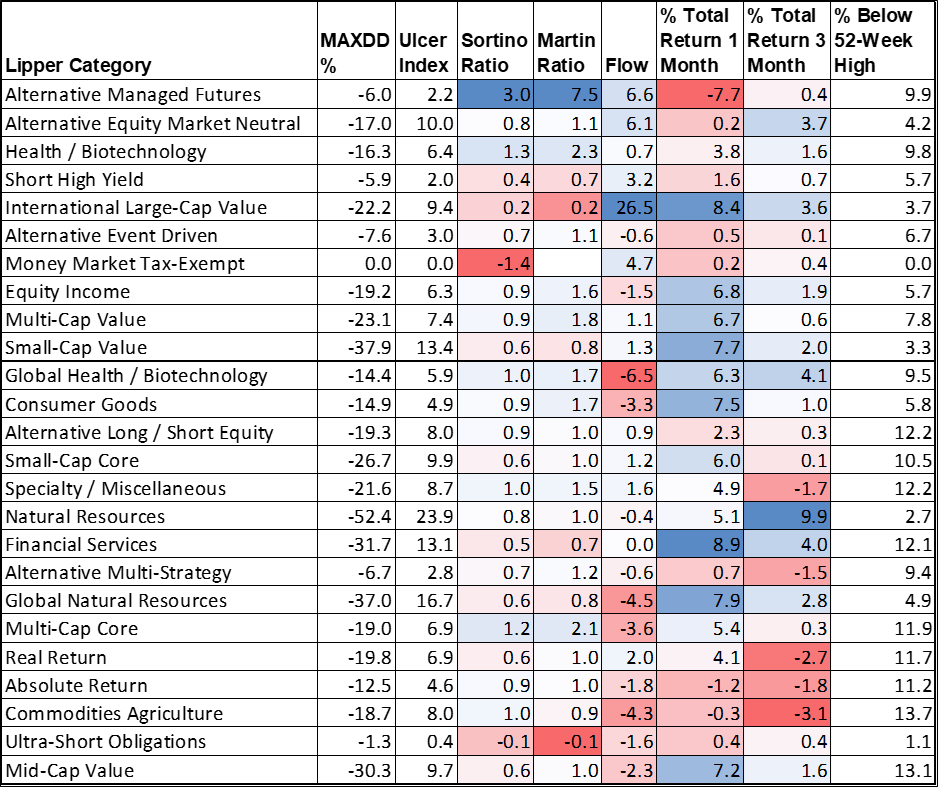 The highest-rated funds per top Lipper Category are shown below. I have sold some funds to create Treasury ladders but still own PQTAX, FMIL, GPANX, VGENX, and FSRRX. I plan to reduce inflation hedges further next year. 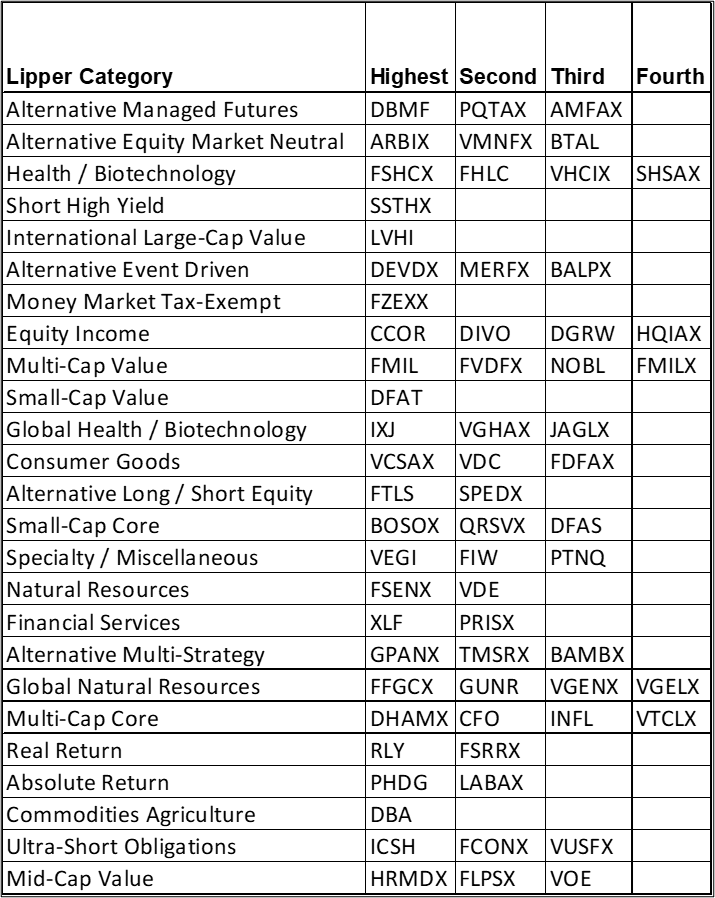 I follow the Bucket Approach with a Safety Bucket containing very conservative short-term assets. My risk is concentrated in longer-term Buckets. Allocations are based on withdrawal strategies. The Treasury ladder approach described in this article is for a conservative Traditional IRA, where I intend to take accelerated withdrawals.

With the world population now at eight billion people, the demand for natural resources is rising. Natural resources such as oil, copper, and rare earths are finite resources. New discoveries will be made, technology can reduce costs, and higher prices will convert marginal resources into viable projects. Geopolitical conflict and COVID have disrupted supply chains in these boom-and-bust industries. I recently purchased a solar system to reduce the long-term risk of energy disruptions and inflation. The potential benefits include converting gas utilities to electric over time and the possible purchase of an electric vehicle in the future. It is a small contribution to managing climate change.