In a peculiarly peculiar move, Praxis Small Cap (MMSCX) is becoming Praxis Small Cap Index Fund. Praxis might, charitably, be described as “bad” (its five-year record trails its peers by 600 basis points annually) and “expensive” (1.68% with a 5.25% sales load). In an attempt to be less “bad,” they’re giving up active management but remaining expensive (1.13% with a 5.25% sales load). Here’s advice to prospective providers of index funds: if you can’t make it cheap, you’re going to lose. Praxis is attempting to dodge that ugly truth by being not-quite-an-index funds: its benchmark is the S&P SmallCap 600 but “the Fund seeks to avoid companies that are deemed inconsistent with the stewardship investing core values. In addition, the Adviser uses optimization techniques to select securities according to their contribution to the Fund’s overall objective and to seek to replicate the characteristics of the index.” So it’s an optimized sub-set of the index minus firms that are poor stewards.”

Joseph Finora, a media relations guy, wrote and politely asked if I’d share the following thunderbolt with you: “According to a new survey by The MFEA (Mutual Fund Education Alliance) in conjunction with Casey Quirk by Deloitte, a leading strategy consultant to the global asset management industry, many fund industry leaders expect the trend toward passive investment management to continue or even accelerate.”

At the beginning of my Research Methods class, I explain that sometimes you hear someone earnestly announce their research findings and the only think you can think is “well, duh.” My recommendation to my students is, don’t do research that makes your listeners roll their eyes and go “well, duh.”

Moerus gets the old gang back together

We will all be, as we have always been, generalists striving to opportunistically identify investments that meet our investment criteria. That said, each person comes with different backgrounds, life experiences, intellectual baggage, so to speak which allows them to “see” opportunities (and importantly, risks) where another might not.  Building an organization with such cognitive diversity has always been our goal. Not only do we hold Ian’s analytic acumen in high regard, we particularly value having him as a colleague for the very different insights that he brings to our investment analysis and security selection process, while hewing to the same investment methodology that we all grew up with.

Mr. Lapey served Third Avenue for 13 years; previously he’d been at First Boston and Salomon Brothers. His M.B.A is  from the Stern School of Business at New York University and his B.A. is from Williams College, arguable the best liberal arts college in America. If you’re interested in why that might be important, consider reading the research of investment team diversity in this month’s story, “The Three Coolest Studies of 2016.”

Closings and other inconveniences

Effective November 21, 2016, Artisan Mid Cap Value Fund (ARTQX) re-opened to new investors. Morningstar puckishly notes “investors have fled Artisan Mid Cap Value in droves lately,” likely because the fund trails 90% of its peers over the past 3- and 5-year periods though it’s had a fine 2016. The fund peaked at $10 billion, troughed at $3.4 billion and currently sits at $4.0 billion.

Effective December 30, Alger Green Fund (SPEGX) will expand its strategy from requiring companies pass an environmental screen to passing social and governance screens as well. At that point the fund’s name will change to Alger Responsible Investing Fund. The fund’s 10-year returns rank it 36th of the 56 “socially conscious” funds in Morningstar’s database. It’s not clear that expanding the number of screens will materially improve that standing.

Voya International Core Fund (IICWX), a four-star, $300 million fund, will under some modest tweaking by the end of January. The fund will change its name (to Voya Multi-manager International Factors, which sort of cries out “trendy!”), entire management team (from Wellington to PanAgora and Voya), investment strategy and expenses. Otherwise, same old, same old.

Off to the Dustbin of History

Artisan Global Small Cap Fund (ARTWX) will liquidate on January 20, 2017. The fund is led by Mark Yockey and Charles-Henri Hamker. It’s drawn $67 million in assets and has trailed 99% of its peers pretty consistently. The announcement of the liquidation was brief, lacking even the usual boilerplate about acting “in the best interest of the fund and shareholders.” We know that the managers have attributed recent underperformance to “exposure to recently unloved areas” of the market and that the fund has trailed all three of its Yockey-led siblings. This is the second liquidation in Artisan’s history, though the first was just six months ago.

The two-year old Natixis ASG Global Macro Fund (GMFAX) will liquidate on December 21, 2016. The decision might have been influenced by its performance chart: 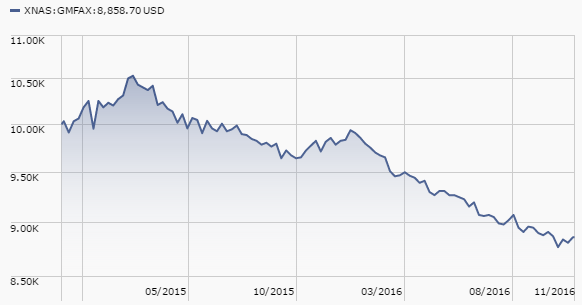 BlackRock Macro Themes Fund (BTHAX) will be “liquidated completely” on December 23, 2016. Yet again, the picture says a lot:

Catalyst/Lyons Hedged Premium Return Fund (CLPAX) will survive Christmas, barely, but won’t live to see the New Year. December 29, 2016. Unlike the two preceding funds, this one at least has an eye-catching performance chart:

That little performance slump you see between March 2015 and February 2016 cost investors about 23%. Fortunately, three of the fund’s four managers put none of their money at risk in it so they weren’t directly harmed by the loss. All three of these funds were dedicated to downside protection and all three were appropriately punished by investors for their failure to come close.

Centre Multi-Asset Real Return Fund (DHMRX) will liquidate and terminate on or about December 12, 2016. The fund sports expenses of 2.1%, which partly explain its three-year returns of (0.44%). In the same filing, the Centre board reminds us that the Centre Global ex-U.S. Equity Fund has been liquidated.

Copeland International Small Cap Dividend Growth Fund (ISDGX) liquidated, on short notice, at the end of November, 2016. The fund was less than a year old at the time of death. While, admittedly, it sucked, I would be disinclined to trust any advisor whose idea of a long-term commitment to a strategy is eight months.

Credit Suisse Global Sustainable Dividend Equity Fund (CGDAX) is subject to “Liquidation, Dissolution and Termination,” making December 15, 2016, a spectacularly busy day. The fund lasted 18 months and had a respectable record but no assets.

CWC Small Cap Aggressive Value Fund (CWCRX) will be noticeably less aggressive after December 21, 2016. The five-year-old fund made about 2% a year, one-quarter as much as its average peer with substantially higher risk.

The Board of Trustees of EnTrustPermal Alternative Select Fund (PASEX) has determined that it is in the best interests of the fund and its shareholders to terminate the fund. The fund is expected to cease operations on or about February 3, 2017. PASEX is a Legg Mason fund with all the baggage that entails: high expenses, poor performance.

Foundry Micro Cap Value Fund (FMCIX) has closed in anticipation of liquidation on or about December 19, 2016. Shares of the Fund are no longer available for purchase. The fund, led by the team that led Touchstone Small Cap Growth for eight years, has had stellar performance for the past year (up nearly 25%, top 3% of its group), but never found traction in the market. It neatly illustrates the challenge of running a small fund: the actual operating expenses were 6.75% and the advisor absorbed two-thirds of those expenses but the result e.r. – 1.75% – was still unpalatable.

Frost Kempner Treasury and Income Fund (FIKTX) will disappear on December 30, 2016 after having managed the unusual feat of trailing 100% of its peers over the past five years.

Henderson International Select Equity Fund (HSQAX) and Henderson Unconstrained Bond Fund (HUNAX) will be liquidated on or about December 29, 2016. Henderson recently underwent a “marriage of equals” with Janus. At the very least, the Henderson and Janus (JUCAX) unconstrained bond funds are equally … uhh, modest in their excellence.

On November 10, 2016, the Loomis Sayles Emerging Markets Opportunities Fund was liquidated.  The Board helpfully explains: “The Fund no longer exists, and as a result, shares of the Fund are no longer available for purchase or exchange.”

Madison Hansberger International Growth Fund (HITGX) liquidates on December 15, 2016. The fund trailed it peers by about 100 basis points a year for the past 3, 5 and 10 year periods but at least had modest volatility.

Manning & Napier Tax Managed Series (EXTAX) will liquidate by February 1, 2017. The 15-year-old fund performed flawlessly over its first decade and reasonably over the past five years (it trailed its peer group by 200 bps but was tax-efficient and made about 11.5% a year), but that was not a compelling profile so …

Nuveen Tactical Market Opportunities Fund (NTMAX), Nuveen Global Total Return Bond Fund (NGTAX) and Nuveen Symphony Dynamic Credit Fund (NQLAX) will all be liquidated after the close of business on or near January 24, 2017. No real losses there.

Salient sort of cleans house from its merger with Forward Funds: on or around February 28, 2017, Salient EM Dividend Signal (PGERX), High Yield (AHBIX), EM Corporate Debt Fund (FFXRX) all step into The Great Beyond. They will be preceded in death by Salient Investment Grade (AITIX), Frontier Strategy (FRONX) and Commodity Long/Short Strategy (FCOMX) funds, all of which escape the holiday shopping madness by disappearing on December 12, 2016.

Seeyond Multi-Asset Allocation Fund (SAFAX) liquidates on December 19, 2016. Seeyond is a French firm quite proud of their “elaborate proprietary models” and willingness to challenge financial theory. Sadly, none of that translated into the ability to make money; the fund is down about 10% since its launch two years ago.

Stadion Defensive International Fund (STOAX) vanishes on December 30, 2016, having lost about 14% since inception.

Vanguard Structured Broad Market Fund (VSBMX) and Vanguard Structured Large-Cap Equity Fund (VSLIX). Vanguard lives on a different world than the rest of us. VSBMX drew $200 million, earned five stars from Morningstar and had top 1% returns over the past five years. For most firms, that wouldn’t be a death sentence. The comparable stats for VSLIX: $100 million, five stars, top 3%.