“A smooth sea never made a skilled sailor.”

There is a tendency among investors, especially younger ones, to extrapolate their assumptions about investments far off into the future, beyond just a normal year or two. Once something has started working – growth rates, earnings increases, share price growth – expectations become unrealistic AND unsustainable. We have seen that in the last few years about the so-called FAANG stocks – Facebook, Amazon, Apple, Netflix, and Google. The Nifty Fifty of old have been replaced by the Fantastic Five.

One of the things that has been ignored in all of the rosy prognostications for the future are the antitrust laws currently sitting on the books in the United States. And part of the reason they are ignored is that in recent years they have not been enforced here (and it should be pointed out that a different situation has been happening in the European Union, where enforcement of their anti-competition laws has continued a pace, and huge multi-million dollar fines have routinely been assessed against a number of U.S. high tech firms).

As investors who need to be aware of things that could come some morning to bite them in the rear end, I commend to your attention an article in the Sunday, September 9, 2018 Business Section of the Sunday New York Times entitled “Be Afraid, Jeff Bezos, Be Very Afraid.” The point of the article is that in the 1970’s a consensus developed on antitrust enforcement that said that consumer well-being, that is, low prices, could obviate the need for antitrust enforcement, notwithstanding anticompetitive behavior and predatory pricing that had the effect of destroying competition.

Along came a law student, now lawyer, named Lina Khan, who wrote a note for the Yale Law Journal titled “Amazon’s Antitrust Paradox.” The point of the paper – Amazon was willing to forgo accounting profits as it built up a shipping and warehouse infrastructure that forced many independent businesses and retailers to do business with it and use its services. Otherwise those companies are shut out of the marketplace unless they are willing to do business with their biggest competitor, on term’s set by their biggest competitor. The influence of Amazon on the domestic economy, indeed its control over many parts of that economy, has allowed it an influence over the economy well in excess of its market share.

Ms. Khan, who was going to a clerkship on the Federal Ninth Circuit Court of Appeals, now finds herself as a consultant to a new commissioner on the Federal Trade Commission. The FTC has been moving forward with hearings and discussions as to whether a new economy requires different attitudes and approaches to the enforcement of antitrust law.

So, why do I think this important? Sometimes we forget that things that swing one way in terms of regulation and enforcement often reach a point where the trends reverse and they swing the other way. Spectrum, the airwaves, banking franchises – all of these are things that in the final analysis belong to the public. And in that context, one should not forget that valuation is not an abstract concept, but in the end, it matters, both for the return of capital as well as the return on capital.

In the Company of Heroes

The television miniseries war drama “Band of Brothers” at its end had a series of interviews with men who had been part of Easy Company. One of them related how he had been asked by his grandson whether he was a hero. His response was telling. He told his grandson that he was not a hero, but rather, that he had served in the company of heroes. 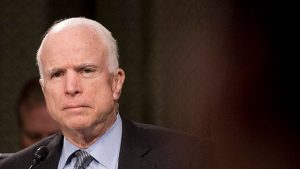 I did not know nor ever meet John McCain. Although we were both naval officers, his period of service was winding down as mine was beginning. By accident of the calendar, I was considered a Vietnam-era veteran, but was never anywhere near Southeast Asia, so our paths did not cross there. Later, after McCain’s retirement and entry into politics, I met those who had known him on active duty or were in contact with him during his political career. Like Hull and Preble, Spruance and Turner before him, McCain’s leadership skills remained a dominant part of who he was, his personality. He was a warrior who men and women would follow anywhere. And, he was an American hero. In the week after his death, it was said repeatedly that we would not see his like again, which if true, is sad for us as a country.

In that vein, I would offer only the words of the Greek poet Simonides of Ceos, who, writing about the fallen of Sparta said,

“These were men, and though they crown their
Homeland with an imperishable crown,

They entered the dark cloud of death,
Though dead, they are not dead;
From on high their virtues raise
Them from the dead, from out of the depth.”