Investors are forever willing to panic themselves at the prospect that their managers have taken Stupid Pillstm. The presumed signs of ingestion: any period of relative underperformance, pretty much without regard to absolute performance, the brevity of the period, its cause or the appropriateness of the peer group.

The automatic urge: running away, either to cash or to an investment with eye-catching recent returns.

Which is, by the way, stupid. 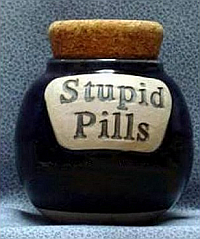 There is no question that some managers take their eye off the ball. Ed Studzinski, who knows an awful lot about what’s going on inside firms, notes that a fair number of managers have become as rich as Croesus. Many of them succumb to the impulse to spend more time thinking about their personal tens of millions than about their investors’ tens of thousands. Others, under pressure from “the business side” of their operations, worry more about attracting and holding assets than about providing the best performance for their investors. And some just lose the passion that once drove them.

It happens, but it’s not an investor’s biggest problem.

A bigger problem, we’d argue, is that managers take Stubbon Pillstm. They’re easily available and, if you can track down a toddler, the symptoms are easily observable. Users become adamant that they’re going to have it their way, and no amount of patience, evidence or argument makes a nickel’s worth of difference. Indeed, in a reaction predicted by Social Judgment Theory, all evidence offered to suggest their wrong makes them furious and even more intractable.

We can be thankful that most toddlers outgrow the impulse (save, perhaps, for those who pursue high elected office instead).

That might describe Ron Muhlenkamp of Muhlenkamp Fund (MUHLX), with whom I invested happily in the late 1990s and early 2000s but who I left when I noticed that, in the face of declining performance, he took to quoting his own newsletter from 1o or 15 years earlier to prove there was no need to change. His fund (per Morningstar, 9/15/2018) now trails 100% of its peers for the past 1, 3, 5, 10 and 15 year periods. It certainly described the reported behavior of Legendary Investors in their final days at Third Avenue Value (TAVFX) and Sequoia (SEQUX). It would certainly be consistent with the self-confidence that Bruce Berkowitz exuded in a long past interview with us, and it would be equally consistent with his dogged embrace of St. Joe (JOE, over 25% of the portfolio) and his Fairholme Fund’s (FAIRX) record; it trails 100% of its peers for the past 1, 3, 5 and 10 year periods.

There are, however, honorable exceptions. There are people who refuse to do something tomorrow simply because it’s what they’re used to, or they’re comfortable with, or it’s what they’ve always done.

Bernie Horn is an exception. Mr. Horn manages, among other funds, Polaris Global Value (PGVFX), a four star fund to which Morningstar’s machine-learning algorithms assign an analyst rating of Gold. It’s an exceptional fund that had an exceptionally poor performance in 2007-09. In a long interview with us, Mr. Horn described “the soul-searching” that went on after the meltdown and the increased rigor he built into the screening process. We recount that interview in our profile of Polaris Global Value  which beat 87% of its peers in the decade following.

“A foolish consistency is the hobgoblin of little minds, adored by little statesmen and philosophers and divines. With consistency a great soul has simply nothing to do. He may as well concern himself with his shadow on the wall. Speak what you think now in hard words, and to-morrow speak what to-morrow thinks in hard words again, though it contradict every thing you said to-day. — ‘Ah, so you shall be sure to be misunderstood.’ — Is it so bad, then, to be misunderstood? Pythagoras was misunderstood, and Socrates, and Jesus, and Luther, and Copernicus, and Galileo, and Newton, and every pure and wise spirit that ever took flesh. To be great is to be misunderstood.” ― Ralph Waldo Emerson, Self-Reliance

Ralf A. Scherschmidt is an exception. Mr. Scherschmidt manages Oberweis International Opportunities (OBIOX), a now-closed three star fund that earns a Bronze rating from Morningstar analysts. The manager uses an understanding of other investors psychological quirks to profit from a series of arbitrage opportunities on top of what’s accomplished by its stock selection screens. It’s an exceptional fund that had an exceptionally poor performance in 2007-09. Mr. Scherschmidt was surprised and upset by those losses, studied his processes carefully and added a risk-optimizer that better let him see that hidden sources of risk in the portfolio. The prospect that his Malaysian fabric manufacturer, his German paint company, his Japanese software firm and his Brazilian lighting manufacturer all had European car companies as major clients illustrates the idea. Those changes, discussed in our profile of Oberweis International Opportunities, allowed him to substantially reduce his downside risk.

And Andrew Foster is an exception, in oh so many ways. Mr. Foster managed, and now co-manages, Seafarer Overseas Growth and Income (SFGIX). Seafarer is in my personal portfolio and has been the subject of several Observer profiles. The fund is closed to new investors. Since inception, the fund has returned 5.6% annually, against 2.1% for its emerging markets peer group. By every measure we track – maximum drawdown, standard deviation, downside deviation, bear market deviation – it has subjected its investors to noticeably less volatility than its peers.

Seafarer posted comparatively tepid returns in 2017. It earned 26% for investors (me: yay!), but trailed 87% of its peers. All told, the fund had sluggish performance from about mid-2016 through May 2018 with a total return of 17% while its peers returned 33.6%. Two things followed:

In the end, he reached two conclusions:

That led Seafarer to announce two important changes at the end of August:

Traditionally, distinctly “value” and “growth” stocks might each comprise 10-20% of the fund’s portfolio. Going forward, 20% would typically be the “floor” for each with a normal range of 25-35% each in value, core, and growth. The fund often holds some fixed-income exposure, which Mr. Foster expects might decline with time. The provision of keeping at least 80% of the portfolio in dividend-paying stocks remains.

“When the facts change, I change my mind. What do you do, Sir?” Authorship contested, once attributed to John Maynard Keynes by Paul Samuelson

The fund is not adopting a team-managed approach, though the recognition of Paul and Inbok certainly answers the “what if Andrew gets hit by a bus?” question, at least with regard to the fund. Each manager will have individual responsibility for the decisions concerning their own component of the portfolio and they’ll be held accountable for their decisions. Andrew believes that individual responsibility leads people to recognize goofs faster and correct them earlier, which is the signature strength of an individually-managed fund.

Bottom line: Seafarer always has been an exceptional fund, both in its treatment of its shareholders and in the execution of its strategy. I anticipate that these changes will help the fund continue that tradition. Great organizations are led by people who recognize changing circumstances, embrace rather than deny the changes and respond intelligently to them. As with great sports teams, they add remarkable people, celebrating rather than fearing the fact that those people will foster growth, adaptation and difference.

In post-script: Seafarer’s performance over the past quarter is yet again in the top 10% of all EM funds. It’s year-to-date, one year and five year returns again top its peers, while three year numbers still lag. Mr. Foster notes that the turnaround is not an artifact of the recent changes (they’re too recent to account for it), but rather a reflection that the fund’s holdings were badly oversold in early 2018. He continues to suspect that conditions in the emerging markets are troubled, just not quite so troubled as the headline writers desperately want you to believe.