Both the stock market’s recent volatility and the financial service industry’s ongoing revolution (there’s blood in the streets!) create and foreclose opportunities. Each month we note, briefly, the recent developments that might change the number and nature of opportunities available to you.

And, in the ongoing spirit of our predecessor FundAlarm, we do occasionally point and snicker at the industry’s boneheadedness.

Fidelity triggered a shockwave in late summer with its decision to launch zero expense ratio funds and to eliminate the minimum initial expense requirements from their funds. We’ve seen vigorous responses from mega-firms such as Vanguard, which reduced purchase minimums on its ultra-low cost Admiral shares to $3,000, and Schwab, which just eliminated them. Just about everyone continues trimming expenses, in many cases charging just 1-5 basis points for their services.

This month’s theme is, you can profit from the foolishness of others. A bunch of closed, first-rate funds have reopened following short periods of underperformance and investor flight.

Columbia Small Cap Value Fund II (COVAX) will reopen to new investors on January 14, 2019. Morningstar’s analysts assign it a Bronze rating, though its performance over the past five years has been no better than “okay.”

Invesco Small Cap Value Fund (VSCAX) will open to all investors effective as of the open of business on January 11, 2019. Morningstar’s analysts assign it a Bronze rating. Its performance looks weak but that’s partly a matter of discipline: it’s a more-nearly deep value investor than its peers, and value has been out of favor for a record stretch.

Effective December 17, 2018, Oakmark International Fund (OAKIX) re-opened to all investors. I’d approach thoughtfully, if at all. The reopening was occasioned by massive outflows in 2018 which, themselves, were occasioned by a short stretch of miserable performance. The fund posted top 10% returns in 2016 and 2017 but bottom 1% relative returns in 2018; around June, investors began fleeing. They are fools. That said, this is really a very large fund.

And, arguably, Mr. Herro has a very large ego. His brief profile in the Wikipedia contains the following warning flag from its editors: “This article is an autobiography or has been extensively edited by the subject or by someone connected to the subject.” His support of gay marriage is noted in the piece, his ongoing support of climate denial groups is not.

The Oberweis International Opportunities Fund (OBIOX) has resumed sales of its shares and is fully open for investment to both existing shareholders and new investors. That’s another case of rotten performance in 2018 trumping the fund’s long-term strength and distinction.

Effective January 16, 2019, the minimum initial investment required to invest for 30 Schwab and Laudus funds will be eliminated.

T. Rowe Price has reduced the expense cap on its Target Date funds to 0.15% through at least 2020.

At a meeting held on December 10, 2018, the Board of Directors of TCW Funds approved the reduction of the management fees and/or the contractual expense limitations for nine of their funds. The most marked price cuts are coming for TCW Global Bond (from a capped 1.04% to 0.70%) and TCW International Small Cap Fund (from 1.40% to 1.20%).

Beginning February 28, 2019, Aberdeen Select International Equity (BJBIX) will expand its hedging options, switch management teams and add a new focus to the fund’s investment strategy: “the Fund’s investment team will focus on securing and analyzing information about the fast changing corporate prospects of companies, concentrating on the most important factors that drive the market price of the investment, which is based on first-hand research and disciplined company evaluation.” This is the latest attempt to resuscitate the once-legendary Julius Baer International Equity fund.

Effective December 14, 2018, Alphacore Statistical Arbitrage Fund (STTKX) became AC Market Neutral Fund. It will also stop using a statistical arbitrage strategy (don’t know) and will transition to a market neutral one relying on total return swaps (don’t know). In just over a year of operation, the managers turned $10,000 into $8,100, so it does seems like a change was in order.

Effective on or about March 1, 2019, the one-star Franklin Balance Sheet Investment Fund (FRBSX) will be renamed Franklin Mutual U.S. Value Fund. It will also formally promise to commit 80% of its assets, rather than “most of its assets,” to equities. As a practical matter, the phrase “most of its assets” has consistently translated to 85-90% in equities already.

On or around February 1, 2019 iShares U.S. Preferred Stock ETF (PFF) becomes iShares Preferred and Income Securities ETF. It picks up a new index to track, one which is U.S. dollar-denominated preferred and hybrid securities.

Effective immediately, the name of the LS Theta Fund (LQTVX) is changed to Theta Income Fund, though nothing else changes.

Effective January 4, 2019, Rational Hedged Return Fund (HRSAX) will become the Rational Tactical Return Fund. The fund got a new management team at the start of 2018 and they promptly crushed their peers and the S&P 500. Folks looking for an options-based strategy might want to peer in here.

On January 1, 2019, Salient Tactical Growth Fund (FFTGX) changed its benchmark from the S&P 500 – with which it was not designed to compete – to the HFRX Equity Hedge Index, with which it can compete.

The Board of Trustees of American Beacon Funds has approved a plan to liquidate and terminate the American Beacon Grosvenor Long/Short Fund (GSVAX) on or about January 29, 2019. It’s a pretty solid fund that never gained market traction.

AMG SouthernSun Global Opportunities Fund (SSOVX), a half million dollar fund, and AMG Renaissance International Equity Fund (RIEIX), a fund with a scant quarter million dollars in the portfolio, were liquidated on December 28, 2018.

BlackRock Emerging Markets Dividend Fund (BACHX), will be liquidated on or about February 13, 2019.

On June 22, 2018, Janus Henderson All Asset Fund (HGAAX) was scheduled for execution on December 31, 2018 “or at such other time as may be authorized by the Trustees.” For reasons undisclosed (perhaps the fund’s resurgence in late 2018?), there is new liquidation date of March 22, 2019 for the Fund.

The Board of Trustees of Janus Aspen Series has approved a plan to liquidate and terminate Janus Henderson Global Unconstrained Bond Portfolio on or about March 1, 2019. Two notes here: (1) this is a portfolio run by Bill Gross but (2) it is not the mutual fund run by Mr. Gross. The portfolio is a tiny flyspeck on an insurance product. The $1 billion fund (JUCAX), about which we’ve offered several strong cautions, is performing about the way we’d expect: 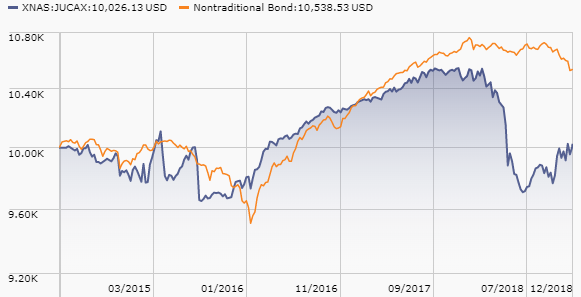 Over four-and-a-half years, Mr. Gross has managed to grow an initial $10,000 to … $10,026. That only modestly trails the gains posted by the change jar on my bedroom dresser.

On December 28, 2019, the Board of Directors of The Lazard Funds had Lazard Emerging Markets Multi-Asset Portfolio (EMMOX) liquidated. It was a tiny EM balanced fund that somehow managed not only to consistently post negative returns, but also to post greater losses than its all-equity peer group.

Laudus Small-Cap MarketMasters Fund (SWOSX) will liquidate on or about February 26, 2019. Hmmm … 10 managers, high expenses, limited assets and a 10-year record that has to look up at 93% of its peers. Apparently mastering the market is trickier than it looked.

Recurrent Natural Resources Fund (RNRGX) will be liquidated and dissolved on or about January 31, 2019.

The unwinding of the Royce Funds continues. Pending shareholder approval, during the second quarter of 2019:

Steinberg Select Fund (STMAX) “anticipates that it will complete the liquidation on or around the close of business on or about January 31, 2019.” Do you suppose that a mutual fund contemplating its own mortality grows queasy at the thought?