When people have no choice, life is almost unbearable …

But as the number of choices keeps growing, negative aspects of having a multitude of options begin to appear …

the negatives escalate until we become overloaded.

At this point, choice no longer liberates, but debilitates.

Barry Schwartz in Paradox of Choices

If last year’s Morningstar Investment Conference, which consolidated the once separate ETF venue, was one of the worst in memory, this year’s was one of the best.

Once again, it occurred in the beautiful and vibrant city of Chicago, where the 35-year old company Morningstar is headquartered, on May 8-10 at the sprawling but impressively run McCormick Place, which happens to be the largest convention center in North America. The conference’s 1350 registered attendees can look out onto Lake Michigan and the Field Museum as they hurry to dozens of break-out sessions focused along so-called “tracks,” like Passive Track or Practice Management Track.

As a sign of the times, the hall’s food court offers an impressive and even friendly Pho Bar, where David bought me lunch, and an Uber sign is now a permanent fixture outside the conference’s south entrance, where customers would rather wait for their rides hailed via iPhone than participate in the shorter traditional taxi line.

Kunal Kapoor, Morningstar’s CEO, opened the conference by stating: “The story of Morningstar is the story of the modern financial advisor.” In a play on his previous opening message, which received some pushback from folks like Josh Brown, this year Mr. Kapoor closed with … “there’s never been a better – or more important – time for great advice.”

On that and much more in his talk, I agree. Our latest Lipper Global Data Feed shows 12,500 funds (33,440 all share classes), including 550 CEFs, 2250 ETFs, and 2150 Insurance Funds. In the conference’s main hall, there were 168 exhibits and vendor booths, with displays, company brochures, colorful trinkets, and well-dressed spokespersons (numbering 701) … all vying for your business!

How does an investor funnel down from the vast universe of offerings to the handful or less to ultimately invest in? Even if the advice is as simple as: “Set all your 401K savings and contributions to the Vanguard Balanced (VBINX) and forget about it.” Most people I know need financial advice.

Mr. Kapoor stressed the firm’s commitment to remaining independent, transparent, and investing for the long term. I find him to be a very impressive, young CEO. His opening keynote is worth viewing here, as is reading the recent piece by Amy Merrick in his alma mater’s magazine, entitled “All In for Investors.”

Cliff Asness gave the opening keynote. He kiddingly started by stating that if he had known how “crappy” a year quants were going to suffer, he would never have agreed to do the talk. “Bad year for quant last year,” he quipped. But before I get into just how bad, a bit more on his good talk, which I think included sound advice.

He believes investors have an easier time recognizing and accepting when traditional discretionary investing strategies have bad years. They don’t expect them to always work. One reason is they have good stories, quoting Warren Buffett: “If a business does well, the stock eventually follows.”

Mr. Asness says that “the most certain long-term failure” is investing in a strategy you can’t stick with. It’s easier if the strategy is 1) intuitive, 2) delivers very high Sharpe, and 3) isn’t too “maverick.” He recognizes that a strategy like “market-neutral multi-factor quantitative” fails on all three counts.

To help fund architects (and ultimately their investors) handle periods of poor performance with such strategies, he suggests building a process (at least) that is intuitive, size bets reasonably, check whether something has changed (acknowledging human nature desperately wants to find something), and resign yourself to that fact that the strategy really is intuitively hard.

If “(if!)” you’ve done the above and haven’t found a smoking gun, “stick like grim death” to your beliefs. 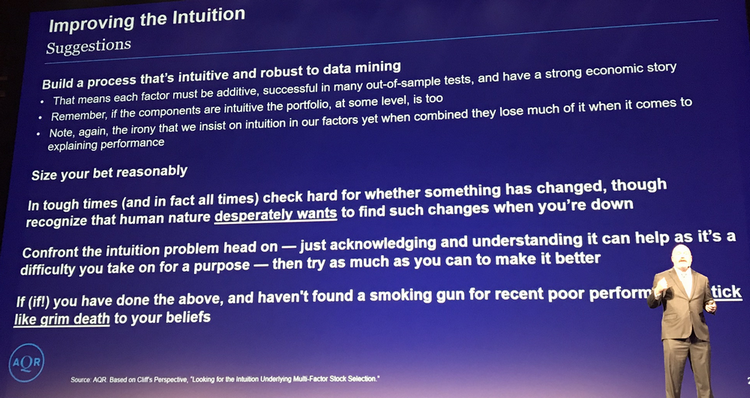 How bad has it been?

But it’s been a tough past year for two of these: Style Premia Alternative (QSPIX) and Long-Short Equity (QLEIX), each down 13-14% through April, particularly since alternatives tend to target investors with more moderate risk tolerance.

AQR is in good company … Wes Gray’s AlphaArchtect, Meb Faber’s Cambria, and O’Shaughnessy Asset Management – all quant shops, all recognized leaders – have struggled this past year with 19 of their 20 funds between them under-performing. (Notable exception: Joel Greenblatt … 18 of 21 Gotham Funds outperformed this past year.)

But as much as I admire Mr. Asness and enjoyed his talk, he never directly addressed why he thought quant generally and funds like QLEIX have been ‘crappy’ lately. Perhaps as close as he may come can found in his paper, entitled “Looking for the Intuition Underlying Multi-Factor Stock Selection.”

My experience with AQR Funds is that when things start going wrong, they circle the wagons and stop communicating. Our colleague and friend Sam Lee of SVRN Asset Management, who championed QSPIX back in 2015, believed “something is broken in the strategy” when it retracted on numerous consecutive days for no apparent reason. He also started questioning AQR’s drawdown protection process. It was not apparent during this year’s drawdowns.

Being significantly negative while the rest of the market is positive is a tough place for alternative funds to be, making them especially hard to stick with, reinforcing Mr. Asness’s point.

David Giroux, a discretionary investor for-sure, suggests that maybe something has changed: “Secular risk is what has changed value.” In the face of sector giants like Apple, Amazon, Facebook, Google there is no more “just having a bad year” for competitors. Worse, too often, management of out-of-favor companies try for the “Hail Mary Pass” to return to glory (e.g., Yahoo), just hastening their demise with destruction of capital. Mr. Giroux’s assertion: “No more reversion to the mean.”

An exception? He’s very bullish on GE, since Larry Culp took the helm.

Interestingly, Adam Seessel published a piece (recently reprinted in the WSJ) that mimics Giroux’s view: “Why Value Investing Is Broken.” 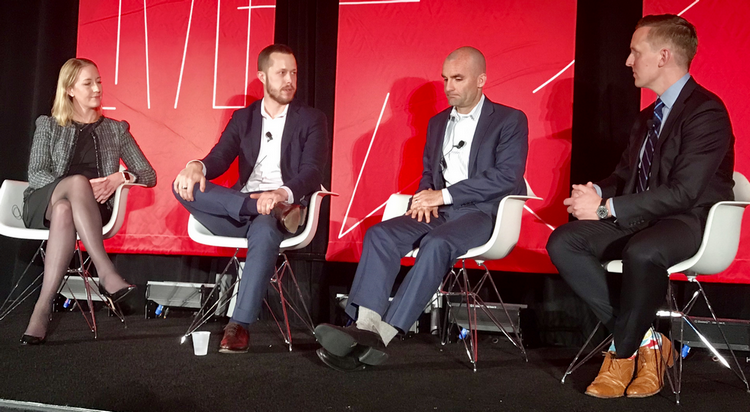 In defense of value, Wes shared his healthy and candid perspective afterward, which also strikes me as good advice:

This skepticism is a recurring narrative throughout the history of value and arguably why value works in the first place. Value is a strategy of watching the market throw the ugly baby out with the bathwater and eventually realizing that even ugly babies should live in one form or the other (even though they will never be as cute as the pretty babies).

When this revaluation occurs, value earns the extra kick. There is always some monopolistic competitor or technology in the marketplace that “can’t lose.” For example, can you imagine what people thought when airplanes were invented? You can look at newspapers, cable, as recent examples of “once dominant, now losers.” They were dominant industries with huge moats, now they all stink.

Value strategies often died with them … a little bit. But value through these different cycles has historically won in the end. And remember, in order to be a generic value stock you need to have some fundamental (e.g., earnings). So systematic value, even in the most generic form, boots out total trash fairly early on. An example is GE. No value strategy will hold it because the net income is negative and has been for almost 2 years now.

So, QED on the importance of good financial advice … even the experts give conflicting views!

I’ve listened to perhaps a hundred of Meb Faber’s excellent podcasts (yes, it seems we’re being flooded with podcasts), and invariably, from one expert guest to the next, I will hear conflicting views, both equally compelling (e.g., Ken Fisher’s bullishness versus James Montier’s caution).

Certainly, the one reason investing can be so hard is that it involves predicting the future, which of course is not entirely knowable. So, we frame investment strategies based on past behavior and experience, which can be subject to individual biases resulting in differing expert opinions … many well intended!

Ultimately, it’s about understanding your own risk tolerance and investment time horizon. Then, finding products to match that charge low fees, apply good processes, and are run by firms that really put investors first. Finally, and here’s the hard part, those products need to behave as you expect, or you will indeed exit, just like Mr. Asness says. Bruce Berkowitz’s Fairholme fund (FAIRX) is a classic example of a fund that set volatility expectations one decade, attracting huge AUM, only to see it evaporate when the fund experienced a completely different kind of volatility the next decade.

On David’s strong recommendation, I visited the Art Institute of Chicago after the conference ended. Filled with the works of extraordinary impressionists: Monet, Renoir, van Gogh, Degas. And, the Dutch master Rembrandt. Sheer delight.

Just as beautiful were the thoughtful words of Doris Kearns Goodwin, who gave the conference’s luncheon keynote, based on her latest book: “Leadership in Turbulent Times.” She was a White House Fellow during the Johnson administration, even after she had written against the Vietnam War. President Johnson is said to have responded: “Oh, bring her down here for a year and if I can’t win her over, no one can.” Ultimately, he asked her to write his biography.

Ok, let’s finish this off with lifetime and past-year risk and performance numbers on three fund families that continue to impress me … all represented well at this year’s conference: Mairs & Power (St. Paul MN), FMI (Milwaukee WI), and Frost (San Antonio TX).

MAPOX is probably the most under-appreciated balanced fund out there … it arguably outperforms Vanguard’s Wellington (VWELX). (And, their spokesmen at the conference handed-out cans of Spam … Hormel is based in the Great Lakes area, a region considered Mairs & Power’s expertise.)

Frost’s bond funds are a must-consider for conservative investors, even if you don’t live in Texas. 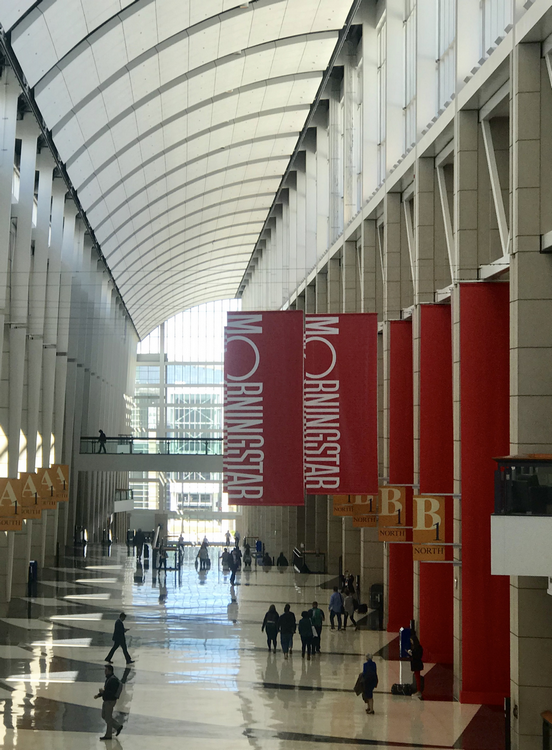