“Bureaucracy is a giant mechanism operated by pygmies.”

When last our heroes met at the end of April, the market had been on a tear pretty much since the beginning of the year. Many domestic funds were showing total returns in the high teens. International funds were likewise showing total returns in the vicinity of twenty percent at April 30th. Active fund managers, to the background music of “Happy Days are Here Again” were waxing poetic about how it was an active manager’s kind of market, when stock picking would once again come to the fore. And this was notwithstanding valuation metrics that as May advanced continued to increase to higher levels. From their point of view, regardless of market valuations, investors should return their moneys to the equity markets, preferably to the funds that had suffered both a tragic bout of under-performance as well as a loss of assets under management in 2018. 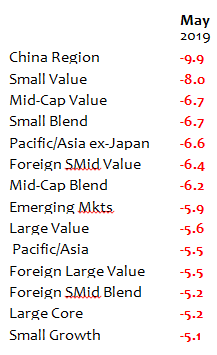 Look forward to almost the end of May. The total returns on those domestic and international funds have melted away by anywhere from five hundred to a thousand basis points. Those who were afraid that the train was leaving the station and piled back into the equity markets in the first week of May now find themselves sitting on some rather large paper losses. Coming on top of what was for many a disastrous 2018, the potential exists for another substantial drawdown in both assets and performance.

Nissim Taleb, of Black Swan fame, gave a rather interesting interview on Bloomberg in May 2019. One of the points he makes is that there is an assault on risk takers now as failures as they more often than not lose money. He moves on to talk about the assault on capitalism by those who make decisions that cause harm to the economy, partly because they don’t have skin in the game. He considers it to not be capitalism but rather crony capitalism, which is what we saw with Wall Street being bailed out by being close to the government. He is worried because we have very low unemployment with huge and growing deficits. He thinks we should still be worried about the possibility of hyper-inflation. What we have done according to him since the financial crisis is to shift debt from private hands to public. And that is because the public debt burden arises as a result of those without skin in the game, the politicians. Taleb strongly feels that one should not invest in the financial markets without tail risk insurance, that is, a hedge. He strongly argues that one should not have exposure to financial assets without the protection of hedging. But he feels that hedging is quite complicated if it is to be done successfully. And if one cannot hedge one’s financial assets, his argument is people should be in cash to avoid the possibility of catastrophic loss.

The part of this interview that gave me pause was the argument that one should not be investing in equities or long-term bonds without the appropriate degree of hedging. This goes along with my comments in months prior about needing to seek out uncorrelated investments. Which has of course become very hard, as (a) huge amounts of capital continues to pour into passive investments, indexing, and (b) so many of the purported active managers are closet indexers. One needs to pay attention now to not just performance, but also to the accuracy of the active share numbers being used in marketing.

There is a very real possibility of this being yet another variation on the marketing scams that come out of the mutual fund industry.

The question then becomes, borrowing from the title of Lenin’s 1901 book, What is to be Done?

I suspect that the most appropriate answer is nothing. Yes, one can sell everything, go to cash (and generate a lot of commissions and taxes), but the average person once out of the market will find it very hard to get back into it when panic (and thus opportunity) sets in. One can try and hedge your investments, but for the average person that is difficult if not impossible. There are, of course, long-short funds as well as market neutral funds, but finding the good ones with good long-term records is not easy. And they are not suitable for an entire investment portfolio. The average investor with the average consultant will most likely be driven, as they were in March and April, by FOMO, Fear of Missing Out. The best advice I can offer is think again about risk tolerance, time horizons, and what your goals are. For someone on the cusp of retirement the answers will be quite different than the answers from someone with thirty or forty working years in front of them. But beware of following the lemmings, as one sees the explosive growth in managed volatility products which have not yet been tested over time.

All Global, All the Time

Some ten years ago global funds (international and domestic equities in one fund) were the bastard children of the mutual fund world, generally shunned by consultants in their asset allocation models. The argument was that they wanted to pick international managers separately from domestic managers. There was some logic to the argument given that many global funds were the result of stapling together an international set of stocks from the international team and a set of domestic stocks from the domestic team and calling it a global product. This usually reflected more the internal politics of a firm, as well as the allocation of revenues and profits between the domestic segment and the international segment than a thought-out and consistently managed investment product.

Now things have reversed. The preference is for global mandates to be filled by integrated global investment teams. This usually results in a more cost-efficient product and a more dynamic investment process, since the politics (or personal economics) are stripped out and the best ideas (and country allocations) win out, whether on a top down macro or bottom up fundamental basis. I think that this makes a great deal of sense.

Indeed, it reflects how I am thinking about asset allocation personally these days. Unfortunately, I can’t take the credit for the idea. It comes from a well-respected West Coast investment consultant. That firm uses a value-oriented global fund as a core, with an overlay of a growth-driven global manager’s fund (which has a concentrated portfolio). For those with a ten year or longer time horizon, it is an approach that seems to make a great deal of sense.

The funds that Ed refers to in his final paragraph are managed by Dodge & Cox and Sands Capital. Interested readers might look into Dodge & Cox Global Stock (DODWX) and Harbor Global Leaders (HGGIX) as affordable, low-minimum ways of accessing those managers.

As a complement to Ed’s article, we screened for global value equity funds and ETFs with the highest Sharpe ratio over the complete market cycle, from October 2007 – now. They are sorted by risk-adjusted returns.

We screened for concentrated global growth equity funds and ETFs with the highest Sharpe ratio over the complete market cycle, from October 2007 – now. Sorted by risk-adjusted returns.

Ed did not select and does not necessarily endorse any of the funds noted above.