Active ETFs are a sort of hybrid between more-traditional ETFs and actively-managed mutual funds. Like traditional ETFs, they trade on the secondary market which means that the advisor doesn’t need to keep cash on hand in order to meet day-to-day withdrawal needs. Some of the expenses traditionally borne by the advisor either don’t exist (ETFs have fewer shareholder reports than, by law, mutual funds do) or are shifted to the brokerage firm. They also offer a structural tax advantage: shareholders aren’t responsible for the yearly tax consequences (and record-keeping) of the manager’s moves; shareholders are taxed only when they sell their shares.

Unlike traditional ETFs, actively-managed ETFs allow for strategies which don’t simply try to replicate the performance of a benchmark index.

Despite those advantages, very few active ETFs (under 300) have launched, very little money has flowed to them (around $80 billion industry-wide) and few equity managers have expressed any interest in them. The reason for the lack of interest has been the transparency requirement: actively-managed ETFs have to report their complete portfolio holdings every day, whereas an actively-managed mutual fund reports only once a quarter. Since ETFs are priced and sold second-by-second, it’s essential to know their current holdings in order to be sure that the published net asset value (cumulative value of the holdings divided by the number of shares in circulation) is accurate.

That’s a problem. Managers often need several days to build a position in a stock; they move slowly and quietly because they don’t want discovery of their interest in the stock to distort its price. If a hedge fund, for example, figures out that you’re going to be buying shares of Company X for the next four days, they’ll buy them ahead of you (a practice called front-running) knowing that your money will further raise the price of the stock. The moment you’re done buying, they sell, pocketing a small profit and screwing with your portfolio.

As a result, most active ETFs – and almost all of the top-performing ones – are fixed-income funds, often focusing on short-term bonds.

“Great Owl” is MFO’s designation for funds whose risk-adjusted returns are in the top 20% of their peer group for every trailing measure period longer than a year. They represent a standard of caution and excellence. The complete list of Great Owls is available at our companion site, MFO Premium, which is home to all of MFOs data and screeners.

In order to identify the best active ETFs, we screened for Great Owls which had been around for a minimum of five years. Only nine funds, including two equity funds, made the cut.

In eight of the nine cases, these funds have outperformed their peers on an absolute basis (APR versus peers) as well as on a risk-adjusted basis. The group’s bias toward low-risk funds is reflected in the Ulcer Index column. The Ulcer Index measures two factors: how far a fund has fallen and how long it takes to get back up. For this group, the Ulcer Index is at or barely above zero.

The Coming Rise of the Active ETFs

So, active ETFs have been held back by advisors’ fear about the transparency requirement. That all changed on May 20, 2019 in the SEC’s ruling on a request by Precidian Investments LLC to issue an active, non-transparent ETFs. Precidian is a subsidiary of Legg Mason and, in filings to the SEC, argued that it’s not necessary for everyone to know what’s in the portfolio; it’s sufficient if just a few key players, highly responsible but sworn to secrecy, know. They’re designated as “authorized participation representatives.” The involvement of the AP representatives would function to keep the price honest without requiring the release of details.

At this point, only domestic securities (stocks, REITs, ADRs, commodities, other ETFs and so on) are allowed under the rule. As a practical matter, the ruling opens the door to some 2000 domestic equity mutual funds launching active ETFs. Precidian, an affiliate of Legg Mason, listed a series of Royce and Clearbridge funds in their filings.

Precidian is now actively marketing the SEC-approved framework to mutual fund advisors. American Century announced a partnership with Precidian on the very day of the SEC approval. Since then, interest has been widespread. According to a ThinkAdvisor report,

American Century is one of 10 asset management firms that has licensed the ActiveShares methodology from Precidian, and 20 other asset managers are in discussion with Precidian to do the same, according to Daniel McCabe, the firm’s chief executive… The 10 asset managers that already have signed contacts with Precidian account for 25% of the active U.S. equity mutual fund market, according to the firm. (SEC Gives Final Nod to First Nontransparent ETF Strategy. 05/21/2019)

Precidian’s approach is not the only one possible that balances the needs of the portfolio manager and the market; Eaton Vance, for example, has filed for approval of a different structure to achieve the same goals.

At its best, the Precidian Active Share structure might revive the mutual fund industry by allowing them to substantially lower expenses (partly by shifting them to others) and reducing short-term tax bills.

The Word from Walden Pond 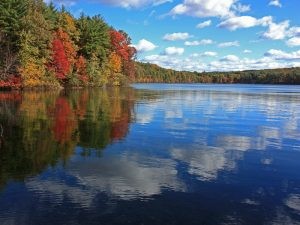 MFO’s position about the fund industry is clear, consistent and realistic: 80% of all extant mutual funds could disappear without any loss to anyone except their advisors. That includes not only freakish little funds peddling some advisor’s weird vision of the investment world but also the vast numbers of large, timid, undistinguished, index-hugging funds whose only goal in life is maintaining the invisible mediocrity that keeps people from yanking their money in horror.

Nothing about an active ETF structure can redeem those funds, though even as we speak the wheels of a hundred marketing engines are turning. MFO has been covering ETFs, active and otherwise, and we’ll continue to do so. But we’ll do so with Henry David Thoreau’s warning pasted to the wall:

As with our colleges, so with a hundred “modern improvements”; there is an illusion about them; there is not always a positive advance. The devil goes on exacting compound interest to the last for his early share and numerous succeeding investments in them. Our inventions are wont to be pretty toys, which distract our attention from serious things. They are but improved means to an unimproved end. (Walden, 36)