It’s never wise to focus on just a single trading day, especially one like the last day of January 2020: 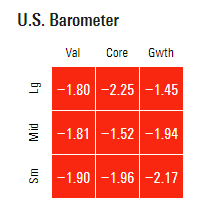 Goodness, no. That will surely lead you to all sorts of bad decisions: selling your portfolio, readying Yahoo Finance, rending your garments, drinking a Keystone (or a Natty Bo, a Natty Lite, a Genny Cream…).

One alternative is to focus on stuff that matters:

January indicator: the performance of the market in January foretells its performance in the next 11 months. Oops … the Vanguard Total Stock Market Index fell just -0.08% in January 2020 (Thanks, Rao!).

The “logic” behind it was that the NFC cities were predominantly the “real economy” Rust Belt cities (Detroit, Chicago, Green Bay) while the AFC upstarts represented whatever belt Oakland’s Al Davis was in. Fellow Pittsburghers will remember the curious contortion that occurred at the indicator’s birth. The sportswriter behind it (a New Yorker) designated the Steelers – an AFC team that had won three Super Bowls – as an NFC team because it was one of the original NFL franchises.

The Year of the Rat: within the Chinese zodiac, the rat – the 2020 sign – represents wealth and generosity, though the last Rat year was 2008. One feng shui practitioner explains that “rats are respected in the East for being resourceful, skillful, open-minded and one of nature’s greatest survivors in times of danger and scarcity.” Rat years favor well-laid plans. So, plan for a prosperous year, just like 2008!

The Year of the Metal Rat: the Chinese calendar also includes a polarity (yin or yang) and an element (representing heaven) with an animal (representing earth). This year, Yang plus Metal, making it the Year of the Metal Rat. (If any of you folks work for Netflix and are casting about for new shows, I’ve already trademarked this one.) Yang is the boisterous, active principle. Metal is the strong element. Put them together and what do you have?

Thomas Putnam, founder of Fennimore Asset Management, advisor to the FAM funds, shared a thoughtful reflection on the horrendous and dispiriting noise (from debasement in Washington and disengagement in London to disease in Wuhan and despair about climate) around us.

There is never a shortage of geopolitical and macroeconomic topics to engross the financial markets. In the 2009 Chairman’s letter we wrote, “The topics constantly at the forefront include excessive government debt, future tax increases, ‘Obamacare,’ the jobless recovery, and the ticking time bombs of potential budget disasters in many states including our domicile, New York.” What followed was a decade in which the S&P 500 returned 13.6% annualized — the fifth-best decade of the last 140 years.

As we enter this next decade, tensions between America and Iran are mounting, we are in our third year of a trade dispute with China, the fate of what’s left of Obamacare are is still unknown, and our upcoming presidential election is shaping up to be extremely divisive. As we did in 2009, we pay attention to these matters — assessing them for their potential long-term impacts — but they do not drive our investment decisions.

That said, our recent experiences have a hand in shaping prudent long-term investing. Booking 30% gains in a year with minimal earnings growth, as we did last year, is pretty much a signal that you’re booking part of your expected future gains in the present.

Rob Arnott and Cliff Asness aren’t exactly Abbott and Costello, but one does get a sense of half-playful, half-competitive sparring between the two. Articles featuring the two have title words like raging, slamming and blasting. As a result, it’s striking when the two of them publish complementary warnings in the same month.

Translation: if you’re looking for 5% real returns, (1) get out of the US market and (2) expect substantial turbulence.

At the end of January, Mr. Asness’s AQR firm published projections that were (1) barely more encouraging and (2) falling. 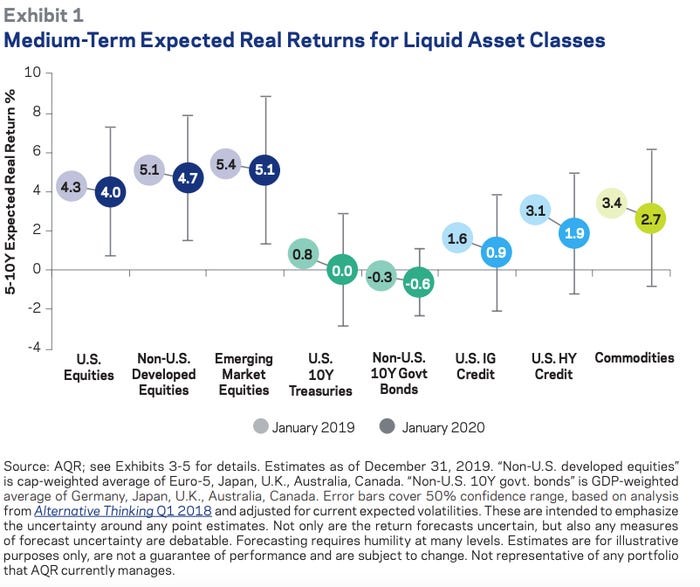 The dot signals projected returns, the length of the line reflects the uncertainty (or volatility) around those projections. Mr. Asness referred to those returns as “soberingly low.”

AQR’s bottom line here is very close to Research Affiliates: low returns across the board, better equity returns outside the US, considerable volatility.

AQR’s recommendation: “it is high time to reevaluate your investing objectives, even if this means expecting lower payouts while putting more money to work in markets.” Be reasonable. Live frugally. Save conscientiously. Sounds doable, though daunting.

Back in December, we fulminated about an article on Leuthold Global that began with the phrase, “Without even doing any in-depth analysis …” The article was nominally the product of Zacks Equity Research. Our response was:

Thank goodness they didn’t waste time with any of that in-depth research stuff that might have noted that this is a conservatively managed quant fund, that it currently holds 32% cash, that its risk-adjusted returns are strong, and that its total returns have pretty much clubbed its peers since inception.

Our suggestion was that if you ever see an article that begins “we haven’t done any in-depth analysis,” you should hit “delete.”

Victoria Odinotska offered a fascinating coda to that piece. Victoria is president of Kanter & Co., which does media relations work for investment firms. (And, based on our experience, does it really well.) She’s also an exceptional person. In any case, Victoria reports that “we are convinced that most of the Zacks articles are written by a machine using a template. It doesn’t matter which fund they write about in one of these write-ups the language is the same.” In a test of Victoria’s suspicion, we searched the phrase “without even doing any in-depth” within the site finance.yahoo.com. The result:

Yep, 355 robo articles keyed to the same phrase and same template. 355 times that Yahoo thought their readers deserved articles “without any in-depth analysis.” I wonder how many of us still remember the ancient times when Yahoo was a bright, hopeful spot on the internet? 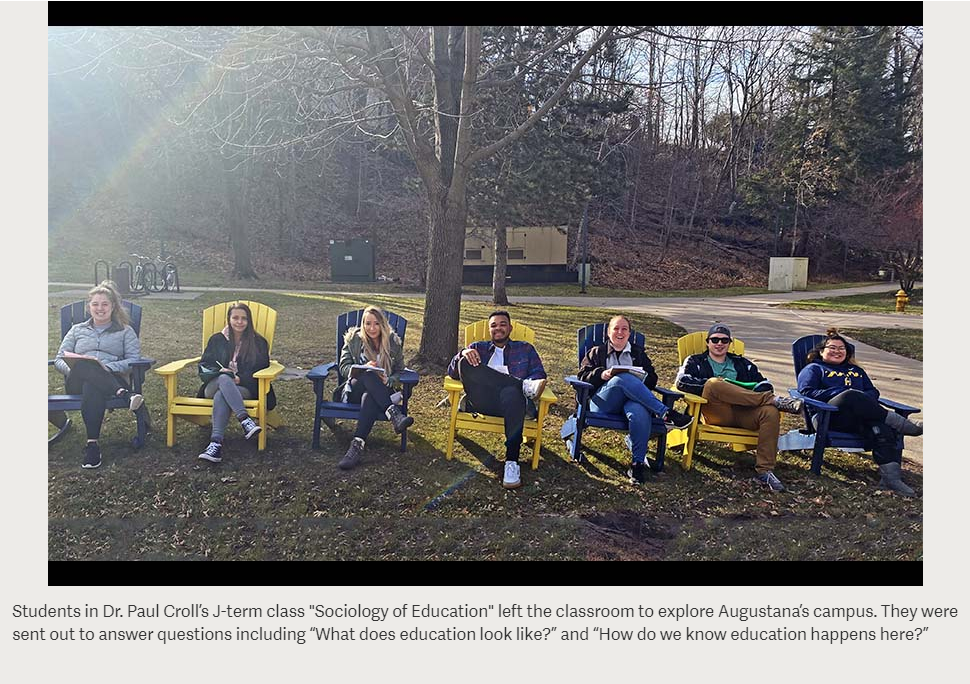 Fitz, Wilson, Eric (challenge met!), Joseph, Barry, Andrew, K. Poody (we’re glad you enjoy the Augie pics), Martin (we appreciate your generosity), Zeke (curious about your adventures Down Under and hopeful that retirement is treating you well and that we’re able to trick you into something), Marvin, James (in memory of Ted Didesch), Mayson (Charles is, indeed, a gem) and the good folks at S&F Investment Advisors out in L.A.

Thanks, most especially, to our faithful subscribers, Gregory, James, William, Matthew, Brian, the other William, Seshadri, David, and Doug.

We are always sad to see one of our subscribers (an informal designation for the folks who make an automated monthly contribution through PayPal) go, but deeply grateful for the support they’ve provided and 100% supportive of their decision. That said if there’s something at MFO that concerns you or something you’d really like to see but haven’t, write me! Your guidance helps us be better.

Starting to think about the Morningstar Investment Conference, 3-5 June. Meet us there, if you can. Working on a profile of Laura Geritz’s Rondure funds, which are coming up on their third anniversary and performing admirably. And finishing a piece on Yacktman Focused (YAFFX) and YCG Enhanced (YCGEX), one famously excellent, the second an intriguing option and both run by guys named Yacktman. March is the month to walk through my personal portfolio. And to consider whether the “Potemkin” that best helps us think about the ETF industry is the Village or the Battleship.