Disciplined Growth Investors pursue both long-term growth and modest current income at reasonable risk. Approximately 65% of the portfolio is invested in stocks and approximately 35% in bonds and cash. The managers can gradually shift equity exposure down to about 55% or up to about 70% if market conditions warrant.

The managers invest primarily in smaller US stocks, currently defined as those with market capitalizations between $1 billion and $15 billion. They “don’t mindlessly diversify across every market, sector, and asset class.” They focus on well-managed corporations and mid-sized growth stocks. The portfolio is constructed. The core attributes of a good investment are “a sustainable competitive advantage relative to industry peers, long-term superior return on capital coupled with the financial ability to meet reasonable growth objectives.”

The fund invests in investment-grade bonds. The weighted duration is 5-10 years, but with the fixed income sleeve, in particular, the managers allow that their process “has both ‘top-down’ (including duration/ maturity positioning, yield curve risk, and sector/quality risk) and ‘bottom-up’ (including credit research, quantitative analysis, and trading) components.” In consequence, they might find cause to invest in longer- or shorter-dated securities from time to time.

The current portfolio holds 44 stocks. By Morningstar’s calculation, 27% qualify as micro-to-small caps, 25% as mid-caps, and 19% as large caps. They own no mega-cap stocks, which occupy over 30% of their peers’ portfolios.

Disciplined Growth Investors, headquartered in Minneapolis, was founded in 1997. It is primarily an institutional investment manager that provides investment management services to pension and profit-sharing plans, corporations and other business and government entities, charitable organizations including foundations and other non-profit entities, and select high-net-worth individuals. The Disciplined Growth Investor Fund is their attempt to provide an institutional-quality portfolio available to regular folks. The firm managed $5.4 billion for over 110 clients as of 12/31/21. They advise two limited partnerships and this one fund.

Mr. Martin founded Disciplined Growth Investors in 1997 and has managed the fund since its inception in 2011. He’s a Navy veteran who started his investing career at Northwestern National Bank. Mr. Nicoski joined DGI in 2003. Prior to joining DGI, he was a co-manager on a small cap mutual fund at US Bank, an analyst at Piper Jaffray, and a bank examiner for Minneapolis Federal Reserve. Nick Hansen joined DGI in 2006 as an analyst out of the MBA program at St. Thomas (my son’s alma mater, so “go Tommies!”). Prior to that, he had been in the graphic design/advertising world working in 3D animation (he’s a computer science guy) and has also been on the fund since inception. Mr. Lima, a Navy veteran, joined DGI in 2011 and the fund in 2022.  His undergrad degree is from MIT in Electrical Engineering and Computer Science (a combined program), which was followed by an MBA from Booth School of Business in Chicago. All of the managers are CFA Charterholders. Mr. Nicoski has earned his CPA.

Mr. Martin intends to close the fund by the time it reaches $1 billion AUM. “We are,” he admirably noted, “slightly crazy about undersizing our mandates. We will do what we need to, to protect the ability of the fund to perform.”

August 12, 2011, but the underlying strategy, available through separately managed accounts, dates to February 28, 1997

$10,000 for a one-time purchase or $100 for accounts established with an automatic investing plan and the intention of building to $10,000. The fund is not available through third-party vendors such as Schwab.

0.78% on assets under management of about $340 million. In an interview, Mr. Martin declared that “too high” and hopes to whittle it down as assets grow.

Disciplined Growth Investors is one of the best-performing balanced funds in existence. It’s also one of the most distinctive. That distinctiveness makes it interesting and valuable, but it also renders treacherous comparisons with its nominal peers.

“Most distinctive” reflects its commitment to smaller stocks. The average market cap for Disciplined Growth is $11 billion, by Morningstar’s calculation. Its average peer sits at $63 billion. DGI invests 27% of its portfolio in micro-to-small cap stocks, its peers place 4% there. By both measures, that’s a seven-to-one difference between DGI and the crowd. Collectively, micro-to-mid cap stocks comprise 52% of the total portfolio where their peers invest under 20%. The average market cap for stocks in the DGI portfolio is nearly the same as the market cap of Lipper’s mid-cap core equity fund group.

Similarly, the fund’s sector weights are completely independent of its peers: of 11 standard sectors (such as tech or financials), DGI has peer-like weights in only two: energy and industrials. They have no current exposure to three sectors (real estate, utilities, and basic materials) and differ in some sectors (e.g., financials) by 10:1 compared to their peers.

That’s a massive distinction with serious implications for the reliability of peer group comparisons. DGI is more volatile than almost all of its Growth Allocation peers but less volatile and — measured by its average five-year performance – more profitable than a pure mid-cap equity portfolio. 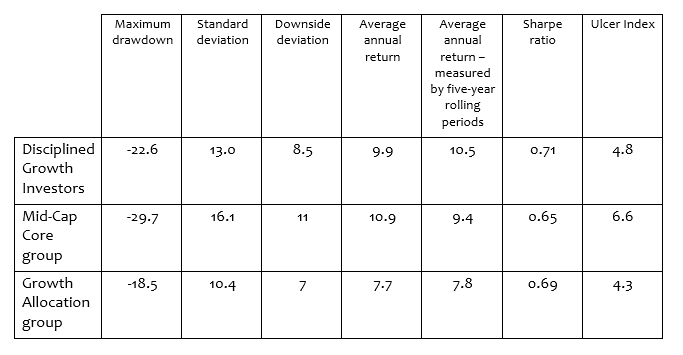 How do you read that?

In our three risk measures – maximum drawdown, standard deviation (or “day-to-day volatility”), and downside (or “bad”) volatility – DGI is a bit more volatile than its large cap-heavy allocation funds and substantially less volatile than a peer mid-cap equity fund.

In our two return measures – annual returns over the past decade and annual returns measured by the experience of someone willing to hold the fund for five years – have DGI earning equity-like returns of 10% and outperforming both pure equity and allocation funds based on its performance over a series of 60 five-year rolling periods. That’s important because it captures the likely returns of a long-term investor, the group that any responsible manager cares most about.

The risk-return ratios – the Sharpe ratio and the Ulcer Index, which measures the depth and duration of a fund’s drawdowns (named for the observation that investments that drop a lot and stay down a long time give us ulcers) – show DGI superior to an all-equity portfolio and more than competitive with a growth allocation one.

Here’s the simplified snapshot of that same data. 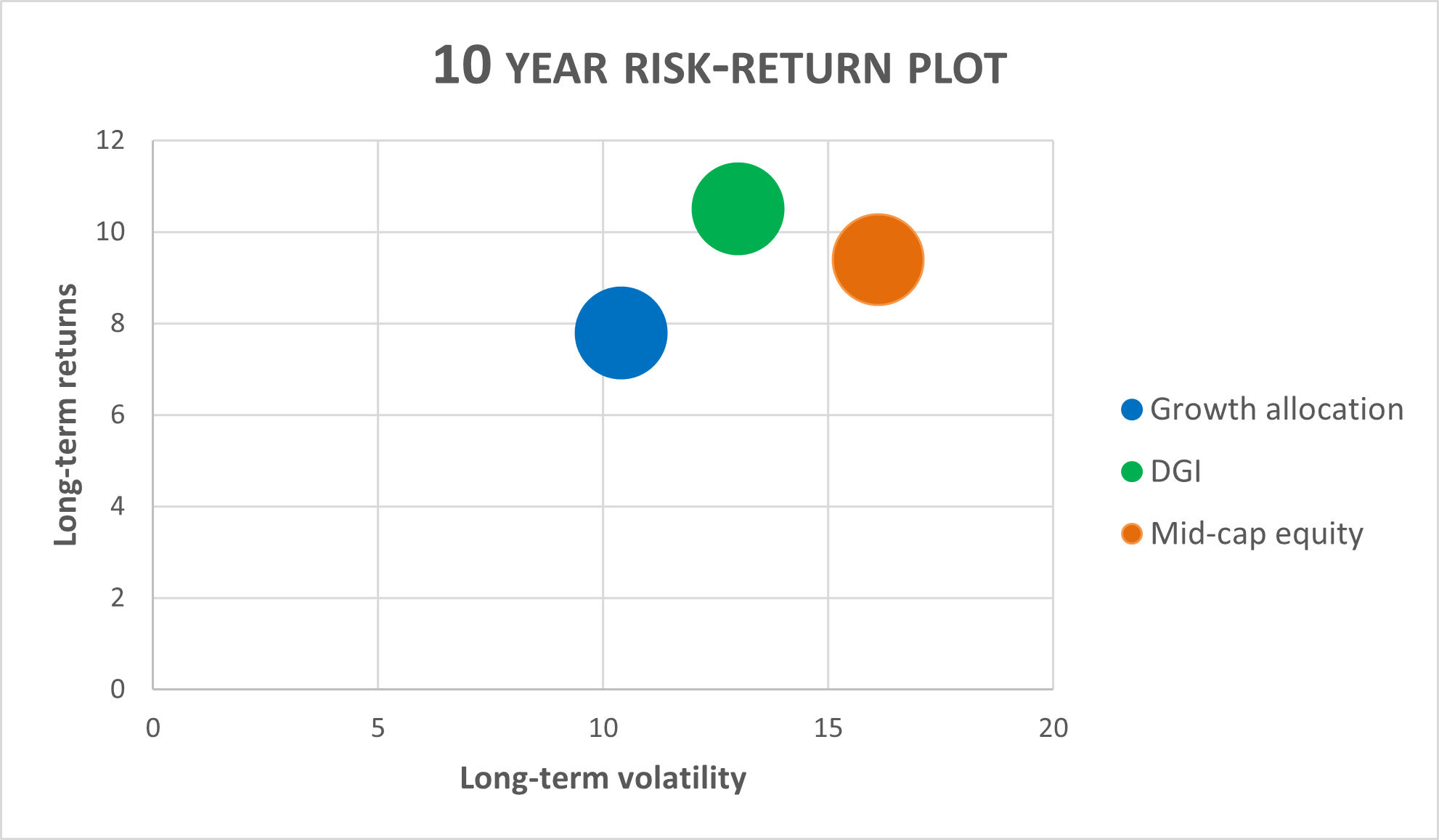 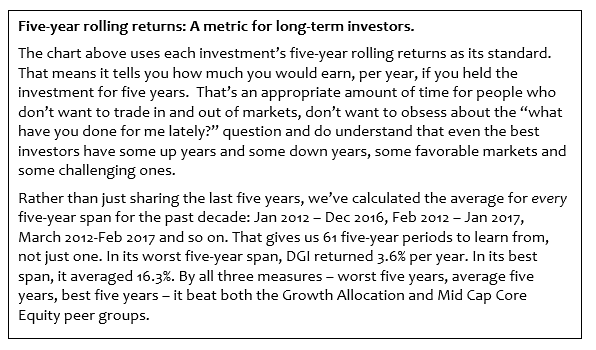 That steady outperformance is driven by two factors.

1. the managers are value-conscious, which makes the portfolio risk-conscious.

The core discipline starts with a “very granular” forecast of the seven-year growth prospects of every potential portfolio company. They’ve used, with refinements, the same discipline for 25 years. If a stock doesn’t project returns of at least 12% annually for the next seven years, they’re out of the discussion. That’s called their hurdle rate, and it accounts for the prospects of the company and also the price of the company’s stock.

We lose money if our forecasts are wrong or we overpay. We have one of the finest long-term records anywhere because we are singularly focused on those two things … in the past 18-24 months, the stocks of high-growth companies were selling at prices well in excess of the future value of the underlying companies … [in a bear market] the former high fliers suffer permanent loss of capital while appropriately priced stocks suffer only temporary markdowns.

Historically, DGI’s valuation-sensitive approach has paid off handsomely “after the bubble has popped.” By their calculation, their stocks outperformed the Russell Mid-Cap Growth Index by 4300 basis points over the five years following the Tech Bubble in 2000 and by 4500 bps in the five years following the Global Financial Crisis in 2008. Cumulatively, since its 1997 inception, its stock portfolio has turned $100 into $1,583 (as of June 2022), while the same investment in the all-stock Russell Mic Cap Growth Index would have returned on $811.

Anticipating liquidity restrictions, the managers “spent last year de-risking the portfolio, which triggered a lot of turnover and high capital gains taxes, but we had to respond to overvaluation.” The subsequent bear market led to “excellent values” among portfolio stocks, with our stocks showing expected returns comfortably above our hurdle rates. Our portfolios are showing the highest expected returns since 2008 …”

An investor’s biggest risk, he argues, “is a long period of low returns,” and he is pretty comfortable that DGI is positioned to avoid that.

2. the managers want to be in your permanent portfolio.

Through its separately managed accounts, DGI offers all-equity portfolios, but Mr. Martin recognizes that pure equity is too volatile to be a comfortable permanent core holding. Adding 30% cash and bonds – corporates, more than Treasuries just now – they’re able to dial back volatility, add a bit of income and not sacrifice long-term returns.

We might be in the midst of the latest retelling of an old story: investor mania, government missteps, froth, and FOMO, followed by a painful comeuppance and the beginning of a new financial environment. The stock market has slammed into a brick wall 30 times in the past century; it’s rare that one market’s darlings survive to be the next market’s darlings. That suggests that prudent investors might look beyond the FAANGs and their speculative siblings during the turbulence today and the new market emerging in the years ahead.

Mr. Martin and his colleagues have navigated their portfolios through periods of market madness, collapse, and reset in both 2000 and 2008. Patient investors prospered in both cases. Over the decade of the mutual fund’s existence, it’s posted returns nearly the very top of both its Morningstar and Lipper peer groups. That performance seems not to be an aberration. Sticking to their discipline – buying smaller stocks positioned to grow, selling them when prospects dim or prices become unjustifiable – seems to work.

Investors who understand that the higher short-run volatility might be a necessary and bearable price for higher long-term returns ought to add Disciplined Growth Investors to their due diligence list.

Disciplined Growth Investors Fund. Please be careful. Disciplined Growth Investors is a balanced fund, and they do refer to themselves as “DGI.” They are not DGI Balanced Fund, which is offered by the Oriental Trust. Searching “DGI” at Morningstar unfailingly takes you to that other fund. DGI Balanced has nothing to do with this fund but might appear higher in the search results.

Quite separately, it is regrettable for a direct-sold fund to have only a few hundred words of content total on its website.  Inexplicably, much of the core content – prospectus, annual report, and account forms – is hidden under the tab labeled “Geeks + Lawyers.”