Medieval world maps were speculative documents, incorporating what the cartographer knew to be true, but that often left a lot of blank space on the map. The places where the mapmaker could offer only uncertain guidance were marked with the Latin legend “Hic sunt dracones.” That is, “here be dragons.”

To be clear, these were not stupid or credulous guys. They were just guys who knew the world was a dangerous place, and the uncharted regions were the most dangerous of all. And so, they offered the clearest warning they could.

Oh, and for those of you thinking about investing in the next 6-18 months: Hic sunt dracones. 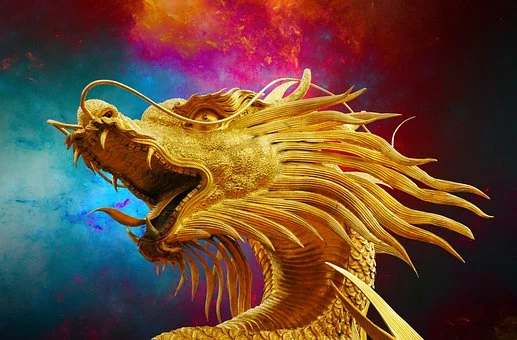 In “What’s Next for the Economy?” Fidelity describes that the US economy has moved into the late stage of the business cycle, which is personified by volatile markets, slower economic growth, and increasing signs of a possible recession. Energy, materials, health care, and consumer staples have historically done well during the late stage, and stocks continue to rise along with the volatility. Wells Fargo’s view, as described in “International Economic Outlook: August 2022”, continues to be that the US economy will be in a recession by early 2023.

Reducing inflation is likely to require a sustained period of below-trend growth. While higher interest rates, slower growth, and softer labor market conditions will bring down inflation, they will also bring some pain to households and businesses. These are the unfortunate costs of reducing inflation. But a failure to restore price stability would mean far greater pain… (Howard Schneider and Ann Saphir, “Powell Sees Pain Ahead as Fed Sticks To The Fast Lane To Beat Inflation,” Reuters, August 2022)

The narrative has changed from inflation being “transitionary” to rates needing to be “higher for longer.” Higher interest rates will be beneficial to savers over the long run. I believe that a hard landing (recession) is more likely than a soft landing. Figure #1 reveals that the year-over-year change in the Personal Consumption Expenditures Price Index (PCEPI) has remained flat for the past six months suggesting that the U.S. economy has probably reached peak inflation. In addition to a slowing economy, Quantitative Tightening, or Federal Reserve balance sheet normalization, will be a headwind to markets.

A worsening investment environment is no surprise as my Investment Model continues to deteriorate rapidly, as shown in Figure #2. My neutral allocation to stocks is 50%, with a minimum of 35% and a maximum of 65%. The average allocation to stocks over the past 27 years has been 58%. The current allocation as of July is estimated at 45% stocks, and if the trend continues, will fall to my minimum allocation to stocks of 35% in August as data becomes available. Production, Services, and Labor Conditions are the strongest indicators and provide hope for a soft landing. Indicators that continue to be highly negative are Valuations, Inflation, Margin Debt, and Housing.  Contributing to the decline in Investment Environment are Productivity, Eurozone, Consumer Confidence, Banking, Leading, Recession, Yield Curve, and Interest Rates. To a lesser extent, National (Coincident) Activity and Spending are decreasing the outlook. The Corporate Health and Orders indicators are beginning to show weakness. A recession in 2023 is becoming increasingly likely. The slowdown is broad-based (red line), with nearly forty percent of the indicators being negative. 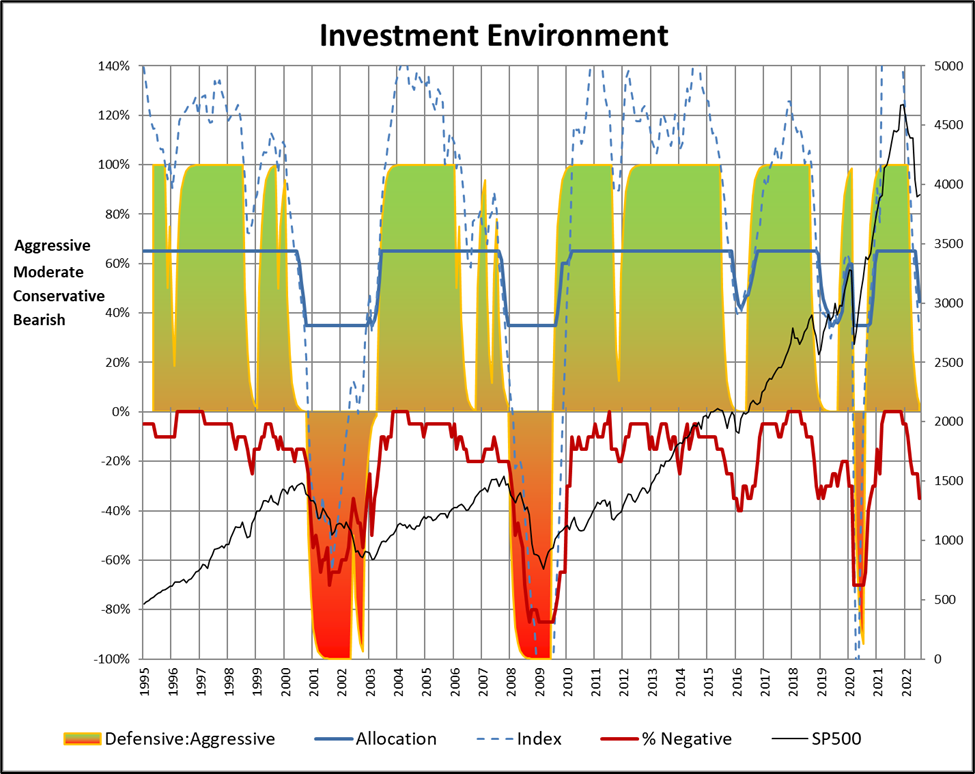 Source: Created by the Author

The Model is not indicating “Defensive” conditions are warranted, only to be conservative. The next six months will be enlightening. I expect Federal Funds rates to rise for the next three to six months, but the yield curve may continue to flatten as a prelude to a recession. I believe that we will see lower lows in 2023 compared to today and position portfolios conservatively.

Retirement Planning in the Face of the Dragon

Why did I buy FMIL if I believe that a recession is approaching? I’ve followed the Bucket Approach by having pensions and Social Security to cover most living expenses:

Mr. Powell’s hawkish speech and response by the markets do not impact my long-term strategy. A bear market will be an opportunity to do a Roth Conversion and increase allocations to stocks at lower valuations. I bought FMIL as a potential long-term investment in which I increase allocations as we move through the contraction phase of the business cycle.

Those already singed by the dragon might consider the effects of even a modest change in retirement date. According to Emily Brandon at U.S. News in “What Is the Average Retirement Age?”, the average retirement age is 61, up from age 59 in 2022, showing that people are working longer. A 2018 study at the National Bureau of Economic Research called “The Power of Working Longer” estimates “that delaying retirement by 3-6 months has the same impact on the retirement standard of living as saving an additional one-percentage point of labor earnings for 30 years.” I did not know this metric while I worked until age 67. This extra six years of employment deferred drawing from savings, increased the value of pensions and retirement benefits, extended work benefits such as insurance, and increased savings. It also allowed me to defer drawing Social Security retirement benefits until age 70, increasing benefits by over thirty percent in retirement. Social Security and pensions are a form of longevity insurance.

Investors looking at the challenge of traversing the uncharted waters of retirement might benefit from listening to the replay of a seminar I attended in late August 2022. I watched the Retirement Preparation Battle Plan Workshop put on by Richard Risso (Director of Financial Planning at RIA Advisors) and Danny Ratliff (Senior Financial Advisor at RIA Advisors), along with Lance Roberts (Chief Investment Officer at RIA Advisors) and Adam Taggart (CEO at Wealthion).  It is a comprehensive two-hour online presentation about Financial Planning and a great start for someone at any age saving for retirement who wants to understand more about retirement planning. They cover topics such as taxes, Social Security, Medicare (and supplemental plans), Health Savings Accounts, Roth 401K vs Roth IRA, tax-advantaged accounts, investment environment including inflation, asset allocation in retirement, long-term investment environment, aging in place options, housing and care in retirement (Continuing Care Retirement Communities), and longevity insurance, among many more relevant topics. The presentation is available at this link. The presentation will be enlightening for most people.