Up to 15% of the fund’s total assets may be invested in emerging markets, though direct EM exposure is currently minimal. The portfolio held 61 stocks as of 6/30/2022.

Harbor Capital Advisors. Harbor is headquartered in Chicago. In 2013 its corporate parent, Robeco Group NV, was acquired by ORIX Corporation, a Japanese financial services firm with a global presence. Harbor is now a wholly owned subsidiary of ORIX. In May 2021, Harbor liquidated its five Harbor Robeco funds just two years after launch. Collectively, the 20 Harbor funds, almost all of which are externally managed, have $60 billion in assets.

Cedar Street Asset Management serves as the sub-advisor for Harbor International Small Cap Fund. It is an independent value-oriented investment management firm with ten employees and is also headquartered in Chicago. The firm is independent, owned by its employees, and manages approximately $274 million (as of 7/31/2022).

Jonathan Brodsky and Waldemar Mozes. Mr. Brodsky founded Cedar Street in 2016. Prior to that, he established the non-U.S. investment practice at Advisory Research. Mr. Brodsky began his investment career in 2000. He worked for the U.S. Securities and Exchanges Commission’s Office of International Affairs, focusing on cross-border regulatory, corporate governance, and enforcement matters. Mr. Brodsky holds a B.A. in political science and an M.A. in international relations from Syracuse University and an M.B.A. and J.D. from Northwestern University. He also studied at Fu Jen University in Taipei, Taiwan.

Mr. Mozes is a Partner and the Director of Investments for Cedar Street Asset Management. Prior to joining Cedar Street, Mr. Mozes developed and implemented the international investment strategy at TAMRO Capital Partners LLC and managed ASTON/TAMRO International Small Cap Fund (AROWX). It had a very promising launch, but the advisor pulled the plug after just one year because they had over $2 million AUM. Mr. Mozes is a bright guy with experience at Artisan and Capital Group. He jokingly described himself as “the best fund manager ever to come from Transylvania.”

$2 billion. The equivalent non-US small cap value strategy that Mr. Brodsky managed at Advisory Research reached around $1.5 billion and there were considerations at the time to move toward a soft close once they hit the $2 billion plateau.

Each of the PMs has between $10-$50K invested directly in the mutual fund, and the senior investment team has over $2 million invested in a limited partnership on which the fund is based. Beyond that, the managers own the sub-advisor and have sort of dedicated their lives, fortunes, and sacred honor to making it work.

Nominally, February 01, 2016. As a practical matter, the fund was reborn on May 23, 2019, when Cedar Street Asset Management brought a new team and new discipline to the fund. They succeeded the Barings team that had been in place at inception.

1.32% for Investor class shares and 0.96% on Institutional class shares, on assets of approximately $100 million. The fund has seen steady inflows over the past year or so, often from investors who had worked with them on earlier funds.

Let’s start with the part people care about: Harbor is the best international small cap fund around.

The immediately meaningful metric here is the fund’s three-year record, since the current team – which itself has a solid record for longer than three years – assumed responsibility for the fund.

Both Morningstar and Lipper classify the fund as international small-mid value. We start there. Using the screeners at MFO Premium, which draw on the Lipper Global Data Feed, we examined the records of all international small cap value and core mutual funds and ETFs. In both absolute and risk-adjusted metrics, Harbor is the top-performing fund.

Total return is a fund’s average annual return for the period; Harbor had the highest total return. Sharpe and Martin ratios are standard and conservative measures of risk-adjusted performance; Harbor was again first.

The two less-familiar measures. The capture ratio compares the amount of a group’s downside that an investment captures relative to the amount of upside it captures. A capture ratio over 1.0 means that you’re seeing more upside than average. Alpha tries to capture the same phenomenon by looking at how much an investment returns relative to what you would expect in a portfolio like it. Alpha is often used as a measure of manager skill or, at least, manager value-added.  It is a sort of “how much bang for the buck” calculation. Any score above 1.0 means that you’re winning. In both cases, no one has done better.

Even when we extend the comparison to the larger set of international small cap core funds, Harbor remains the top choice with the highest total return, Sharpe ratio, capture ratio, and Alpha.

Extended as far as possible to include all international small-to-midcap funds and ETFs -– value, core, growth – Harbor finishes in the top 5% by all of these measures. Given the market’s growth bias, that’s a remarkable accomplishment.

We can say with confidence that the Cedar Street team has been about the best at what they do. The portfolio reflects three distinct preferences:

The most pressing remaining questions are, (1) should you consider international small caps (2) now?

US stocks have outperformed international stocks, the US currency has risen against its EAFE peers, and US corporations have posted record levels of profit. But it’s impossible to maintain record profit levels and record valuation levels indefinitely.

The strong US dollar has been a significant headwind to performance for most non-US funds. This provides an opportunity for non-US companies that have significant earnings exposure to US markets. In addition, the same way that many Americans are enjoying cheaper shopping in Paris or hotels and dining in Tokyo this summer, so too can they enjoy more buying power in non-US funds.

Growth stocks have outperformed value stocks for the past decade. That dominance was triggered by the (justifiably) panicked reaction of central banks to the global financial crisis, which plausibly threatened the collapse of the global financial system. Their solution was free money, then more free money delivered through conventional and unconventional means. National governments joined the frenzy in 2020 with trillions of stimulus spending to offset the global pandemic. That tidal wave of money encouraged, then underwrote, all sorts of financial tomfoolery, from using high-yield debt to pay for stock buybacks to convincing formerly sober adults that electronic images of bored apes were an asset class. Those days are ending.

Value and growth styles tend to alternate long periods of relative outperformance. The chart below reflects two long periods of dominance by value and, since the global financial crisis, a long period of growth dominance. 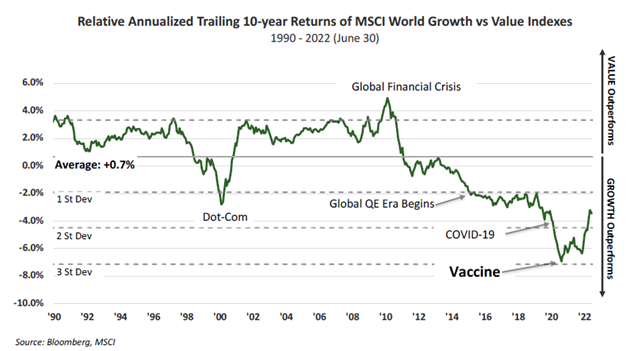 If value resurges (hinted at in the 2022 move on this chart), it might dominate growth through the end of the decade.

Messrs Mozes and Brodsky argue that both reversion and financial uncertainty strengthen the argument for international value investing.

We also believe that value-style equities are likely to outperform due to fundamental reasons. The market has been paying less for earnings streams from value-style equities than growth-style equities, both in absolute and relative terms … when many “value” companies reach an operational inflection point (e.g., top-line acceleration, margin expansion, balance sheet rationalization, sale of an unprofitable segment, etc.) markets will react quickly to the improvement in fundamentals and even re-rate the business with higher multiples. In other words, there are two opportunities to boost returns from depressed, value-style equities.

The opposite phenomena of what is currently taking place with “growth” businesses that fail to meet lofty growth expectations.

Given the high levels of uncertainty in all corners of financial markets combined with a higher price for failure (rising interest rates), we believe it pays to pay less for new investment opportunities.

Harbor ISC has earned the MFO “Great Owl” designation for posting top quintile risk-adjusted returns, it earned the Lipper Leader recognition for both Total Return and Consistent Returns over the three years since Cedar Street assumed command, it earned a spot on Schwab’s Select List, and it has a five-star rating from Morningstar for the same period. It’s an experienced team and a sensible strategy with a rock-solid track record, both here and at their former Advisory Research and TAMRO funds. Equity investors interested in putting a bit of light between themselves and the high-priced US equity market would be well-advised to put Harbor International Small Cap Fund on their due diligence list.

Harbor International Small Cap Fund. The guys’ Quarterly Report, under “Documents,” is clear and sensible, though mostly focused on the here-and-now. Readers interested in the general case for investing in international small cap stocks might find interest in one of several recent white papers. Those might include Artisan Partner’s “The Case for International Small Caps” (2021), Putnam’s “Why Now is the time to consider international small caps” (August 2022), and Steve Lipper’s “Why Allocate to Non-U.S. Small-Caps?” (2021).