On behalf of my Celtic forebears, happy New Year! November 1 marks the traditional beginning of the Celtic year at a fire-rich festival called Samhain (or Samhuinn or something like it). It’s a curious cultural choice: the old year ends with the harvest, and the new year begins “the darker half” of the year, a period of confinement and, frequently, gnawing hunger.

On whole, the Romans chose the bright path: they began the year around March 1st when the first hopeful sprouts of spring appeared. The Celts, made of sterner stuff, looked the darkness square in the eye and shouted, “let’s party!” 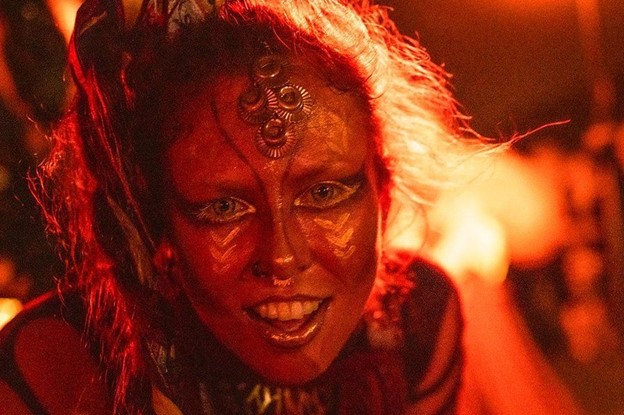 Far be it from me to suggest that we’ll be facing “the darker half” of the market in the months ahead, but, really, that’s quite possible.

The argument is fairly straightforward: the people whose careers depend on your attraction to stock investing have a vested interest in the end of the bear market, and a lot of articles this month have declared that “the end is nigh.” CityWire declared, “cash levels hit 20-year highs as capitulation fears speak!” (10/18/2022). The 20-year high in question? 6.3% cash … which is to say, the average stock investor is 93.4% in the market. That’s more like “capitulation fears mumble vaguely.” Based on a Merrill Lynch investment manager survey, the story concluded, “Equities are viewed as being near maximum bear levels.”

Today’s p/e is 27.6. My reading is that the market can end up with single-digit p/e ratios. So the worst case might be a 60% drop from here. Ick. The researchers at Leuthold have looked at lots of bear markets, not just the truly spectacular ones. Even returning to median market valuations – that is, getting back to but not below the long-term values – implies a titanic drop from here.

Back to the Medians

Things look dramatically better if you believe that the world before 1995 is irrelevant. If you assume that we’ll return to the happy days of near-zero interest and the guarantee of the Fed racing to save the stock market – the conditions defining that period – then we might see just another 10% decline.

The problem is that the Fed is virtually undefeated in its fights with investors. Fight the Fed, lose.

The Fed has repeatedly signaled its resolve to break the back of inflation, and they’ll know they’ve won only when the data shows they’ve won. Two problems with that:

On November 2, the Fed raised its benchmark rate by another 76 basis points, and the market roared upward … until the Fed chairman started answering reporters’ questions in plain and unambiguous English. “It is very premature to think about pausing,” “We have a ways to go,” and signs that the current tightening has worked are “not obvious to me.” Finally, “We have some ground left to cover here. And cover it we will.”

Growth stocks, the prime beneficiaries of free money to underwrite speculative ventures, ended the day down 4% from their open.

All is not darkness, and we do not benefit from being ruled by fear. Bull markets end. Bear markets end. Good investors make money because they are the ones who didn’t surrender to greed in the one, didn’t surrender to fear in the other, and didn’t pretend that they could magically dance between the two. They thought through their goals, took prudent risks, and refused to embrace the old military adage, “When in danger, When in doubt, Run in circles, Scream and shout!”

My colleagues’ work dominates this issue, as they help you act prudently in the short term while preparing for the inevitable gains that will follow.

Charles Boccadorro documents “the worst year ever,” at least from the perspective of bond investors. Of the 109 bond funds with a record of 10 years or more, 106 are suffering through the worst year in their histories.

Devesh Shah highlights the strategy of the Horizon Kinetics funds, whose success is (a) amazing and (b) leveraged to the fate of a single stock. Sometimes that turns out to be a brilliant move in the long term. Devesh thinks through how to assess your risks in this case.

Mark Freeland returns to the thankless task of helping investors, most especially new investors, think through the morass around last year’s hottest idea: ESG investing. Even though politicians and marketers have both swooped in, Mark assures that all is not lost.

Lynn Bolin works through the waves that the Fed’s actions are causing and recommends the strategies and funds that might make the greatest sense in the New Year. (Ours, not the Celtic one.) He suspects there will be value in longer-dated Treasuries and rebalancing back toward equities.

Dennis Baran returns with a profile the Vela Large Cap Plus Fund, a value-conscious large cap fund that can deploy a modest short position (the portfolio must be 80% net long and usually is 90% or above) to dampen losses and reward longer term investors.

And The Shadow, stealthily vigilant, reports on dozens of bits of industry news and changes in Briefly Noted.

My contribution is limited to the reminder that better times will return, but not necessarily for the winners of the past decade. Research Affiliates, a major investor and research firm, offers a free asset allocation tool that projects the forward-looking real 10-year returns for several dozen asset classes.

Who ends up on top?

GMO’s gloss on those projections would be “too damned optimistic …except for emerging markets value stocks, where we project a 10.6% real returns and international small caps, which we think are about a percent higher.”

Research Affiliates also offer projected Sharpe ratios since some asset classes have volatility way out of line with their returns. 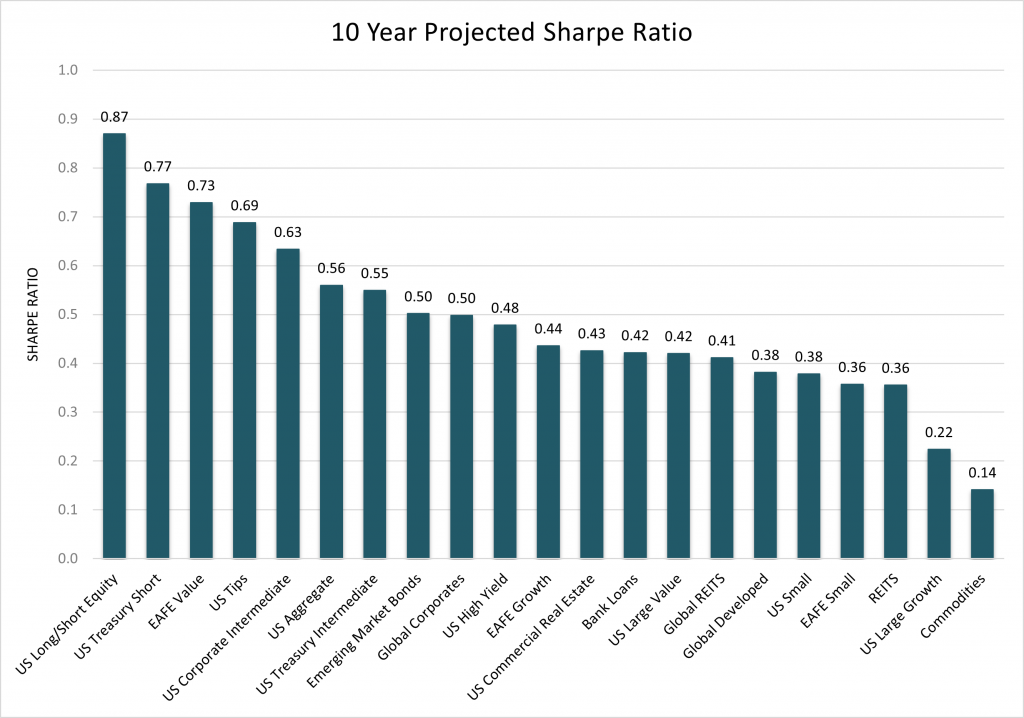 If RA is right, the best bang for your buck will come from a long/short equity position, short-term US Treasuries, and international value stocks. The least attractive niche: REITs, large-cap growth stocks, and commodities.

In December, we’ll explore the evidence for an impending resurgence of small cap stocks, most particularly those at the corner of High Quality and Value, and we’ll offer three fund suggestions for each of the most promising asset classes.

MFO has become the home of victims of a remarkable investment scam. “TBO Capital” claimed to be a private healthcare fund with rock-solid credentials, eye-watering returns, and a host of reasons to believe they were legitimate, including Linked In profiles and allied websites. 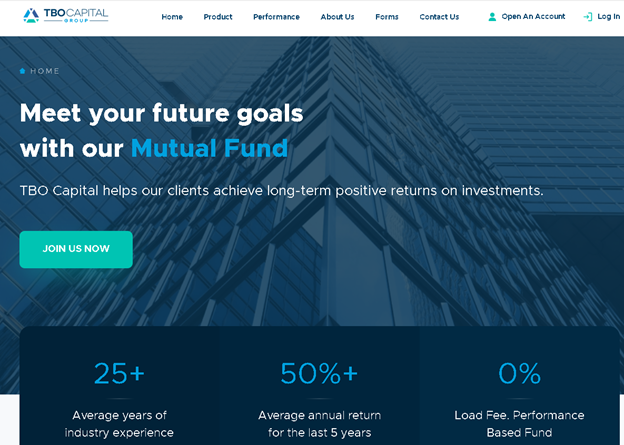 All of which were fraudulent and all of which disappeared from the web at the same moment. To date, Google News reports zero stories on the crime.

MFO members smelled something fishy back in July and started a skeptic’s thread.

Fundoholic, July 31
Anybody heard of or done business with? It’s a private Healthcare fund. I can’t seem to find anything on them…except from them..ha! Claims good returns but…? Any experiences? Thanks

Sven, July 31
Why do you trust this company? Many investors got burned badly by Bernie Mandoff. Even then, he fabricated many of his private reports.

Fundoholic, July 31
Who said I trust anyone? If you read it you’d know I was merely trying to see if anyone has any experience with them.

Crash, August 1
nope, none. never heard of them.

msf, August 1
Oodles of red flags. Starting with performance that would make Bernie Madoff blush. Not a single losing month from January 2016 through June 2022. (I can hardly wait to see it post July results.) Smooth as silk. Just look at the graph.

And yet, they did look good to hundreds of investors … in the US surely, but perhaps also globally. More recently, victims of the scam have been drawn to us, and MFO now appears (based on Google search results) to be the web’s leading source of information on the scam. There’s a long, detailed, well-researched, and ultimately painful discussion thread that lays out the crime and a separate (private) discussion board that serves as a nexus for a group (30+ and counting) cadre of defrauded investors.

To date, victims of the scam have contacted local authorities (“not our jurisdiction”), state authorities (some interest), their banks (banks of first deposit, with varied results), FINRA (“definitely not our problem”), the SEC (which appears to be pursuing the question and have interviewed many of the folks, but who are reluctant to say anything), the FBI (which might be getting prodded by the banks)

If you’re a regulator, the thread might serve as a useful source of corroborating evidence and additional victims. For journalists and investment advisors, the thread will offer both story leads and cautionary tales. For any of us, it might give us a chance to do good and to study the anatomy of a financial crime.

New Year’s blessings to our indispensable regulars, from the good folks at S&F Investment Advisor in lovely Encino to Wilson, Gregory, William, the other William, Brian, David, and Doug.

Many thanks to John (we’re so glad to know you’re here), Barry, and to the Ellie and Dan Fund for a really generous gift. You are wonders, one and all.

As a quick heads-up, we’ll include a short fundraising appeal in our December issue. In the face of a market meltdown and miscellaneous madness, it’s been a pretty thin year, and traditionally most of our contributions have occurred in the last 30 days of the year.

I hear tell that there’s an election coming up. Here’s a parting thought: “vote like your future depends on it, because it does. Vote for good people who seem more interested in solving problems than in howling into the dark because we need them more and more.”